Don’t you just love those itty bitty wireless mice with the teeny weeny innocuous dongle thingy that fits in your laptop bag and you can pull it out and plug it in whenever you get the shits with using the track pad?  Well, I have one of those sweet little Logitech babies and I love it… especially when I was using my old Toshiba laptop which had a track record for less than superlative track pad performance (yeah, yeah, totally intended).

They’re compact and convenient and you can take them anywhere with you and lend it to a friend if needs be and they just… work.  They have an on/off switch so the battery lasts forever and a little pop up cover to keep the dongle inside it – very clever design all round.  I have a schexy red one (of course) and it looks a bit like this: 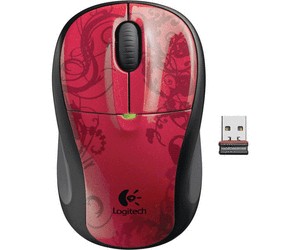 And I love it.  They’re awesome.  So easy to use.  So easy to carry.  So handy everyday really… until you misplace the little dongle thingy.  At which point it becomes a completely useless piece of plastic that doesn’t even cut it as a paperweight.  🙁

So I guess it’s pretty evident that this is exactly what occurred to me some months ago.  I lost my dongle.  I’m sure no one is surprised to hear that – it’s probably hiding somewhere with my sanity and my internal monologue censor.  The mouse itself floated around the living room for a while as I checked all the likely places a dongle might hide… in other people’s computers, in pencil cases, in drawers full of computery bits, frisked down my laptop bag numerous times but alas… the location of the elusive little dongle remained a mystery and eventually I felt the need to put the mouse ‘somewhere safe’ in case the dongle reappeared under equally mysterious circumstances down the track.

Several weeks pass and one day I had cause to restart the Media PC which is located some 7′ off the ground on top of a  6′ tall corner television cabinet and lo and behold, what do I see?  But my itty bitty little black and red mouse bluetooth dongle sticking politely out of a USB port in the front of the Media PC.  Yay!  Little happy dance occurs.  Which lasts for all of about 2 minutes and 18 seconds until I realize I have absolutely no idea where I put the mouse for ‘safe keeping’.  Damn and botheration.  Well, naturally a substantial mouse hunt ensues and I figure the little fucker is much bigger than the blue tooth dongle which was smaller than a 20c piece, so it shouldn’t be too hard to find right?  And it’s bright red for crying out loud… it should stick out like dogs’ bollocks… and yet it doesn’t.  So, now I have the teeny tiny bluetooth dongly bit and no mouse!  Urgh. Typical!!

Now I’m thinking, do I throw the stupid dongle out and forget the whole thing?  Or attempt to put the dongle ‘somewhere safe’ and hope the silly mouse comes out of hiding at some point?  Naturally being someone who can’t stand the idea of waste, I go for Option Two and put the bluetooth dongle ‘away’.  Oh, what on God’s green circuit board was I thinking!?!  :S

Because a couple of weeks later the mouse rears it’s elusive little head in amongst some camera battery chargers conveniently located in the Second ‘Don’t-Go-In-There’ Drawer, of my desk!  Initial reaction:  “I found the mouse!  Hahaha!  I am finally going to rejoin these two which chance and bad management had drawn asunder!”  Swiftly followed by “Oh FFS, have I really lost the itty bitty dongle… AGAIN!?!?

Why, yes.  Yes I have.  Seems my mouse and it’s dongle are destined to remain indefinitely parted due to acts of stupidity well and truly within my control, but somehow ephemerally beyond my grasp.  Urgh.  Technology – who needs it.

3 thoughts on “Working without a wire.”