I have spent my entire day fighting with one bureaucracy to another.  Starting with CentreLink and the erroneous bills they’re sending me for $6,631.00, and $942.68 and then $0.00 for the 2009/2010 financial year.  AND the bills they’ve raised for $6,050.00, then $2,500 and then $0.00 for the 2010/2011 financial year.  AND then the payment they’ve raised for $2,439.85 for the 2011/2012 financial year all because some noompty decided to go back into our little Family Assistance file and put in an income estimate for me that DOESN’T EXIST!!!  I’ve been a full time student for the last few years who hasn’t had a job 🙁 in several years – ergo $0 income: zip, nil, nada.  But for some reason someone changed that for the last three years causing this plethora of bills to be generated!  WTF?  Good to know where your tax dollars are going… to messing with computer systems, generating erroneous bills and killing trees.  Yay.   😐

And after that bureaucracy I had the fun of doing the RACQ run around as I continue to try and get my car sorted after some prat ran into it in the church car park… ‘your car is undrivable’ … ‘my car IS driveable ,it’s just not legally driveable because the tail light is damaged’ … ‘we will have to tow your car to Coopers Plains because it’s listed here as not driveable’ … ‘ how about we fix the tail light and then I’ll drive it to Coopers Plains and save on towing fees?’ … ‘that’s not how we do things’  … ‘oh, I was wondering why my premiums are so expensive – bit of common sense too much to hope for?’…

Then after semi-sorting out that bit of bureaucratic bullshit, the fun really started when I got onto the Department of Housing who are delightfully refusing to accept responsibiltity for the fucktard neighbours still being in situ despite promises months ago that they’d be moved on by now.  A conversation that ended with me promising a (another!) Ministerial correspondence and contact with various media outlets about their Department’s complete and utter failure to provide protection to the public under their own Departmental Instructions and Guidelines… because at this point I’ve had it up to Here – *Here being approximately 1 foot above my head height at this point. 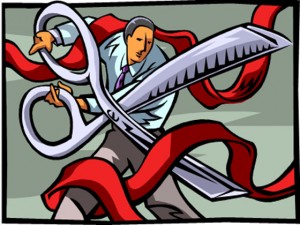 So if I wake up screaming in the middle of the night tonight, it’ll be because I’m being strangled by red tape like an insidious and inescapable boa constrictor determined to squeeze the very life blood out of me!!!