I saw this article on the BBC News website just before Christmas and it’s been annoying me.  Beluga caviar imports have been banned or restricted for quite some time due to dwindling numbers of sturgeon in the Caspian…. which has been positively unbearable Darrrhlings! For the little people like us!  Why have you seen the price of decent caviar Sweeties?  Well… no I haven’t either and couldn’t give a shit…. but I digress.

A few days before Christmas Italian Customs officials confiscated some 40kgs of the stuff which has a street value of approximately USD$550,000…. and the powers that be in their infinite wisdom have decided to disseminate it to the Milanese poor and/or homeless via charitable shelters and hospices as a special Christmas treat.

Does anyone else see a fundamental flaw in this cunning plan?  Yeah okay they can give all these poor people an unexpected (and for all we know possibly unwanted) Christmas treat or maybe they could have sold the stuff to the highest bidder and fed the city’s homeless and disaffected for who knows how many months.  Perhaps that sort of money would be better off getting those same downtrodden folks into suitable programs to assisst with providing accommodation or employment or training.  Who knows how far half a millon dollars would go towards useful programs to assist the poor in a town like Milan.

But donating the ridiculoulsy expensive caviar as a extravagant Christmas gift?  That just seems plain stupid to me. 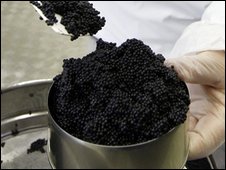 Beluga caviar seized by Italian customs officers is
to be distributed to poor people in Milan as a Christmas gift.
.