Pakistani volunteers show the bodies of shooting victims on Thursday, June 14, 2007 in Quetta, Pakistan. Gunmen opened fire on soldiers and police officers killing nine people in this southwestern city of Pakistan considered a hideout of Taliban militants, shortly after the visit of a top U. S. official.

The troops were attacked as they drove toward military quarters in the city of Quetta just before midnight, city police chief Rehmatullah Niazi said. Another five soldiers were wounded.

There was no immediate claim of responsibility. Niazi blamed “enemies and terrorists” but declined to elaborate.

U.S. Assistant Secretary of State Richard Boucher had already left the city to return to Islamabad before the shooting, the police chief said.

Earlier Thursday, Boucher met with Jam Mohammed Yousaf, the top elected official in Baluchistan province, who assured him that al-Qaida chief Osama bin Laden and Taliban chief Mullah Omar were not hiding in the region.

Pakistan is a key U.S. ally in the fight against terrorism, but some American and Afghan officials have identified Quetta, the capital of Baluchistan, as a hub of Taliban activity.

Yousaf told Boucher, who arrived in Pakistan on Tuesday, that he would not allow the region to be used for terrorist activity.

“There is no Taliban headquarters in Baluchistan … Mullah Omar or Osama bin Laden are not in Baluchistan,” a government statement quoted Yousaf as telling Boucher. 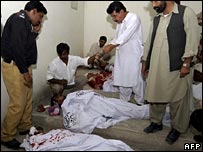 Most of the dead were soldiers returning from leave

Police in the Pakistani city of Quetta say they have arrested 12 people in connection with an attack which left nine dead, most of them soldiers.

A local rebel group said it had carried out Thursday’s gun attack on a military vehicle.

The shooting happened hours after a visit to Quetta by the US assistant secretary of state, Richard Boucher.

He was briefed about the south-western province’s grievances over access to its mineral and energy reserves.

Opposition leaders and rebels say the resources are appropriated by the central government and Balochistan province has not benefited from them.

A BBC correspondent in Islamabad says these feelings have fuelled the insurgency, claiming hundreds of lives and forcing hundreds of people to migrate.

The gunmen ambushed a military vehicle near a railway station. Police say four people were wounded in the attack.

“The troops were returning from home leave when some unknown gunmen ambushed their van near a railway station and according to my information, nine people were killed,” Maj Gen Waheed Arshad told Reuters news agency.

Quetta police chief Rehmatullah Niazi said the gunmen attacked the van carrying soldiers at about midnight and fled the scene.

The Reuters news agency earlier reported that a man claiming to speak for the Balochistan Liberation Army, a guerrilla group, called a press club in Quetta to claim responsibility for the attack.

Quetta is the capital of Balochistan, which has witnessed frequent attacks on security forces and gas pipelines by tribal rebels demanding greater autonomy and a larger share of the profits from natural resources.