It’s Anzac Day again….. And yes, I know we’re all supposed to be a little reflective on Anzac Day…. but Anzac Day brings up some very mixed up emotions for me every year….  some good, some bad, but mostly a sense of feeling bad BECAUSE some of my memories are good !??!  I dont know – I’m all over the place on this one.

Back when I was in high school, I was a member of my local army cadets – 12RCU, and we used to be heavily involved each year in participating in Anzac Day parades.  It would start with a dawn service down at Wynnum as part of the catafalque party, either at the waterfront or at the Wynnum RSL, followed up by a march of the entire unit in Camp Hill to a remembrance service in Carina, and ended up in the City parade at midday.   It was always a solemn day but was also usually a lot of fun, doing something with your friends on the public holiday and spending the day going from event to event.  We also usually managed to finish the day by getting a gaggle of about 30-40 of us to go see a movie together while we were in town.

So while most of my memories are of the services, full of solemn thoughts, prayer and respectful remembrance ( I remember the Last Post would always gave me goose bumps) my memories of Anzac Day as a teenager also include a fun and social aspect as well.  I have very vivid recollections of groups of us stomping down the steps in the McDonalds in the Mall in our GPs each year, making a helluva racket and laughing like hyenas…  🙂   I can also remember walking into the cinema to see Top Gun and looking for a place to sit amongst a sea of kharki as the whole place seemed to be full of cadets from various units across BrisVegas.   It was always a bittersweet sort of day…

But none so more than Anzac Day 1988… we did the dawn service, did the morning service, did the city parade, did the McDonalds Stomp, did a movie… and I came home in the early evening.   A1 was with me that day, and I also remember being very excited about spending the day with new and amazing hunky good looking boyfriend, got to canoodle in the dark at the cinema and everything… anyway…

I was feeling great after an exhausting but hugely fun day, and was greeted by my mother who was in tears.  There had been an incident out on my uncle’s farm… three of his small children had drowned in a creek that was swollen by floodwaters.  Their names were Elizabeth 7, Christopher 5 and Sarah who I think was barely 3.  They were playing near the creek, and none of them knew how to swim as they lived no where near swimming pools or anything, and this was apparently the first time in a decade there was water in this creek.  Those poor kids.  I remember being shocked, but that the information didn’t really sink in until the following morning when I saw my uncle’s face on the front of the Courier Mail beside pictures of my little cousins.   And it was then that the full weight of the tragedy stuck home.  Those poor little kids… what I mostly remember about the days that followed… and the awful funeral, surrounded by media, and the tiny white coffins… was an overwhelming sadness to think that they will never grow up.

I rarely think about it anymore… though it does occasional manifest itself in an tendency towards paranoia when I see small children unsupervised around water.

And every Anzac Day I find myself sparing a though for them….
.

HelpDesk Chickie:  no that was – @goliath.net.au….

grrr and snarl  😐  sometimes I wish I could tell them to put the damn thing back in the box and send it back.   I need to get some sleep…  I need hot chocolate … I need new shoes!!!!  sniff … sniff

Once upon a time in a kingdom far far away… there was a short little blonde thing that used to be all bubbly early in the morning pissing off all the people who dragged themselves out of bed at half nine looking like they’d just slept at the bottom of a cocky cage with a racoon, a bowl of noodles and a hairdresser named Shazza.

I vaguely remember that short little blonde thing… but seems to have disappeared. I used to get up, be awake and alert straight away and jump out of bed and get on with my morning – no problems. Now…. I’m desperately trying to cling to sleep, and the first thing I’m aware of is the ridiculous amount of back pain I’ve been in all night. Working nights is fun.. the place is quiet, we get to have a bit of a laugh and it’s really relaxed and groovy compared to when the whole place is full of people. But when I get home around midnight, it takes me a couple of hours to wind down and then I find myself going to sleep each night around 0200. Which in itself wouldn’t be a problem…. EXCEPT I CAN’T SEEM TO SLEEP IN!!!

I’m waking up between 0630 and 0800 on a good day and then have to set about getting the rug rat all pack off to school. So tired… all the time. I need a holiday.

We were driving to school this morning, and the rug rat is looking out the window seemingly looking at the passing traffic, but it turns out he was contemplating his place in the world….

Small Child:   My Dad is the boss of you Mom.

Mom:   Just because someone is bigger, doesn’t mean they’re in charge, Honey.

Small Child:  Yes it does Mom…  (goes momentarily quiet and then burst out with –
Yaleman* must be the boss of everyone!

Strangely enough… turtles seem to have been a continuing theme this week!  I was going to take Angel to the cinema today to see Happy N’Ever After…. but then I finally found a couple of minutes to watch a trailer for it and decided that it looked like crap… so asked Angel what he was into… and next thing I know, I find myself taking him to see the Teenage Mutant Ninja Turtles movie. 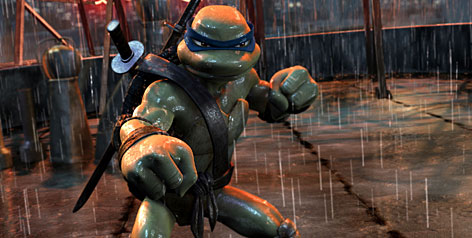 Happy to admit that my expectations were exceeded – namely because they were extremely low in the first place… possibly because I’m not a fan as I’d never even seen a single Teenage Ninja Turtle cartoon in my life!  I found that I actually enjoyed it quite a bit – and Angel loved it . He was asking if he could watch it again before the credits had finished rolling 🙂  The animation was really well done….there was one scene in particular when some of the turtles are fighting on a rooftop in the rain, and you can tell the animators had a ball with it… the raindrops look fantastic and they’ve carefully done all the reflections and lighting and ‘camera angles’ to make it look as schmick as possible.

In a continuing turtle vein…. we had lunch at a cafe in Victoria Point on Bunker Street near the new cinema there and we sat on a deck overlooking a lagoon which had literally dozens of turtles sunning themselves in the shallows!  Hmmm….  wondering where the turtles are going to turn up next!
.