This morning we were back down to TOHO cinemas in Namba for an exclusive (well, us and 452 others) showing of Detective Pikachu… aka ‘Deadpool Does a Pokemon film’.  We took a slightly risky approach to pick up tickets for this movie choosing to buy tickets online on a Japanese website that was translated using Google Translate, which means we were about 75% certain it was going to be in English with Japanese subtitles, and not dubbed into Japanese!  Collecting the tickets was not in any way reassuring… 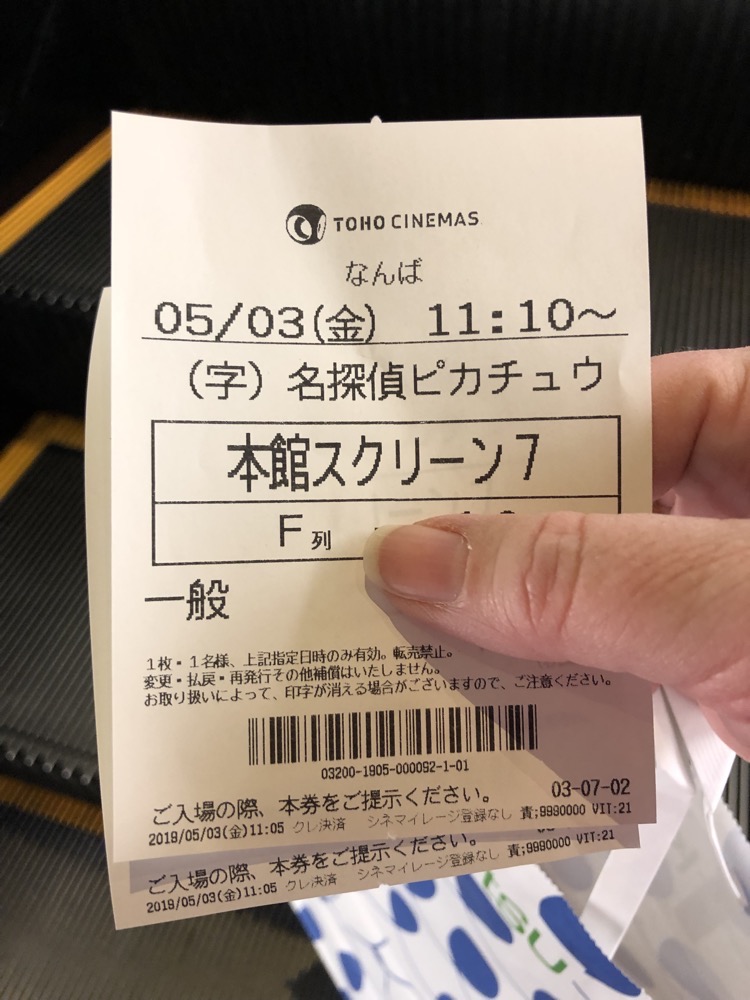 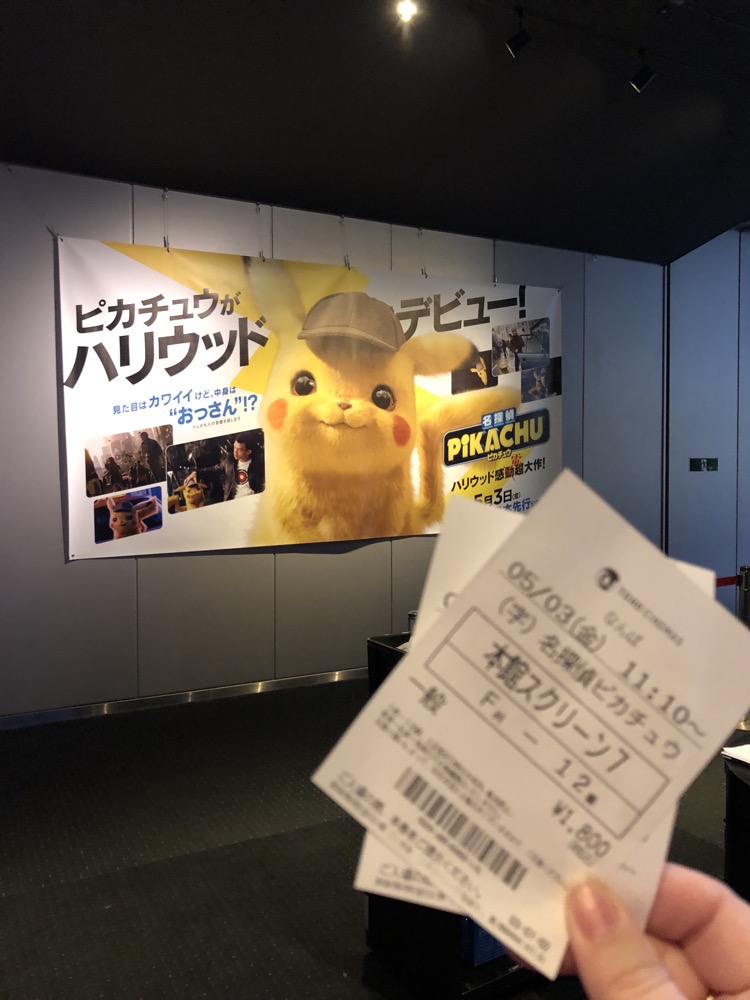 The complex is huge, we had to go up about four stories to find our cinema. Mr K is into the popcorn as per usual and we found our seats without any problem – and then the waiting.  Watching the ads (all in Japanese), watching the trailers (in a mix of Japanese and English), then the cinema etiquette PSAs (all in Japanese) and then the opening credits of the film… until finally some dialogue and SCORE!  It’s in English!   Phew!

One thing that is definitely noticeable in Japan is the amount of English everywhere – you don’t see this much English in most other non-Enligsh speaking countries anywhere.  There are English menus in every restaurant, English on the information directory of any shopping centre and department store, on trains, train platforms and even in elevators for any sort of public announcements in any public area, will be in Japanese and English everywhere – no matter how big the city or how small the town.

The Japanese are not at risk of seeing their language being subsumed by English, but they are far more tolerant of this intrusion into their everyday lives than many other cultures would be – can you imagine how Australians would react if we had every public sign, menu, or public announcement in both English and Chinese or something?  They’d be apoplectic.  Hell, they probably wouldn’t even be happy if they were suddenly being bombarded by English and an indigenous language. 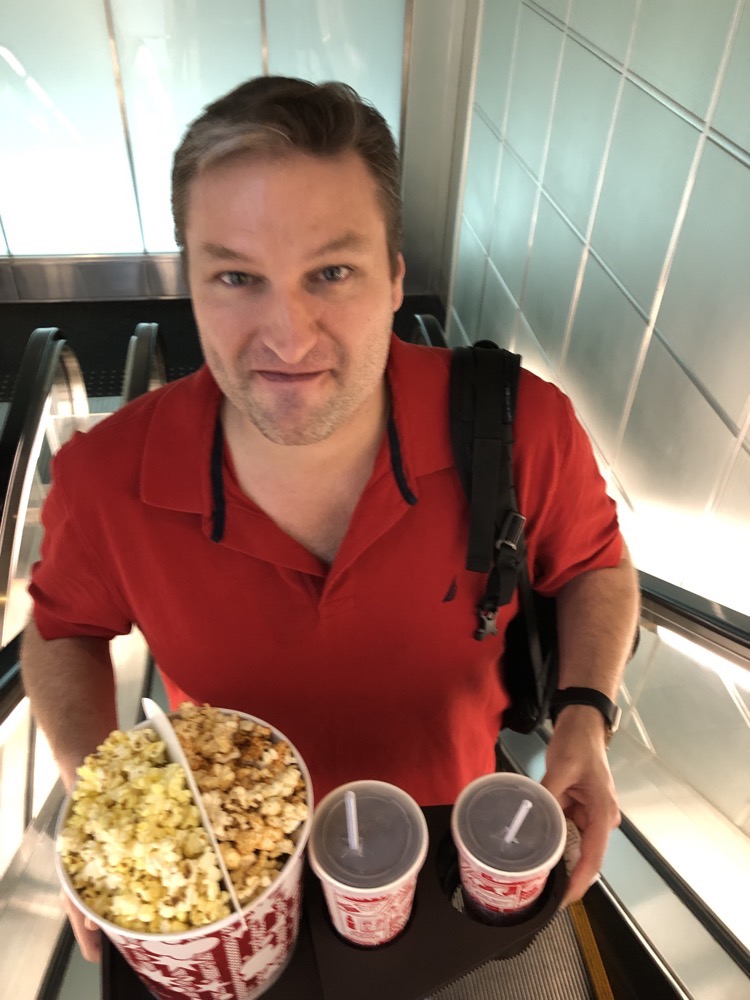 The movie was great fun btw – the story, the world, and the Pokemon were all very cleverly executed.  I know a lot of people at home who are looking forward to seeing it and I am sure they won’t’ be disappointed.

Afterwards, we went poking around the other shopping district near Namba… the not-Dotonburi side. Yay Golden Week, everything is packed cheek to jowl, but again, very polite crowds everywhere we went.  The Japanese are a very orderly people, they will keep left when walking on streets and footpaths, they rarely seem to walk like four abreast the way Americans habitually seem to do, taking up an entire sidewalk while talking loudly and failing to notice that people are trying to get around them.  There are a few weirdnesses to this though that have been doing my head in all week…

It makes no sense – yet everyone seems to have it sorted.  Half the time there are arrows on the ground in very big areas like large train stations directing you to do exactly this – why they don’t have one protocol across all cities, I’ll never know. 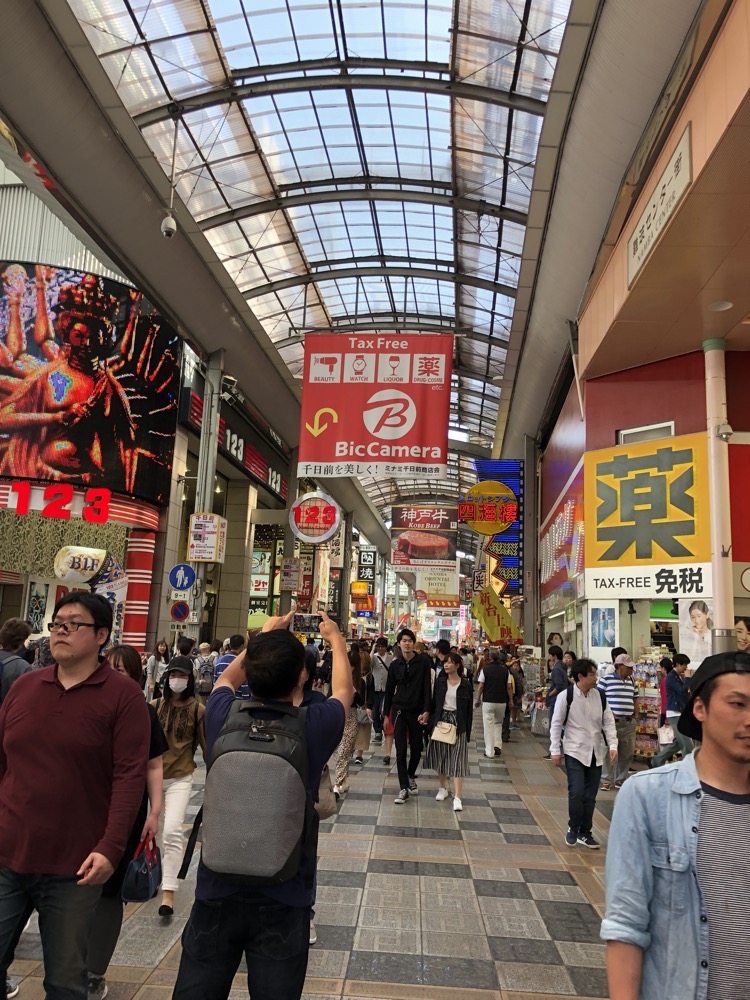 Shopping for chopsticks and sunscreen and kites and find… sake heaven! 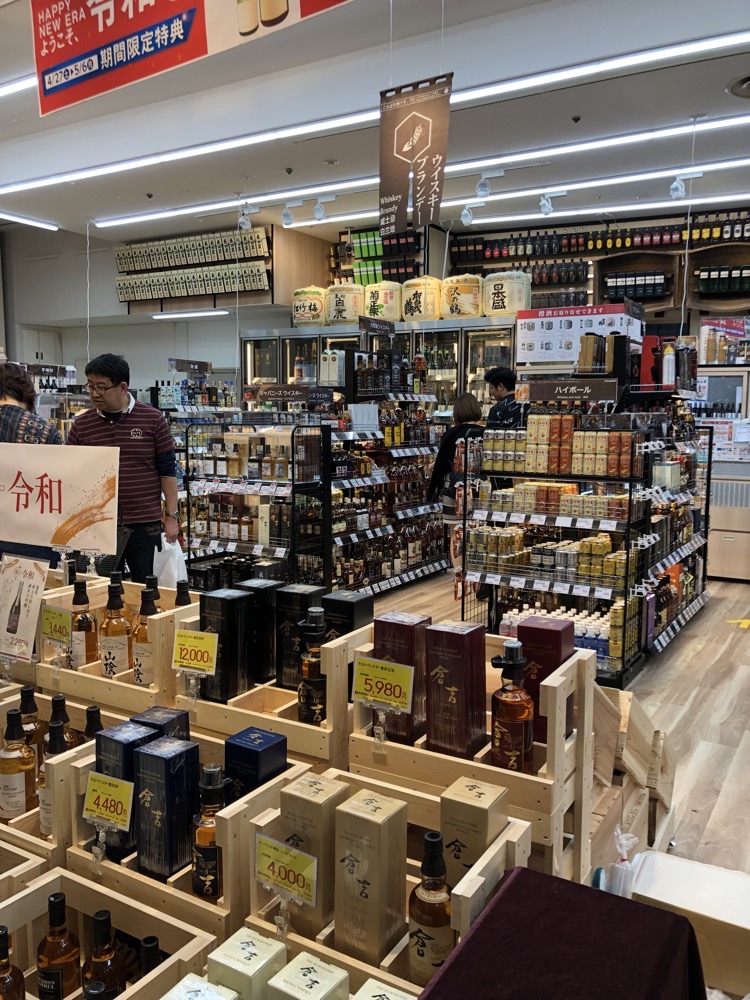 After a bit of shopping, we went looking for a place for lunch and found this bizarre fishing restaurant.  I’d say it’s got tourist trap all over it, but for the fact that it is full of locals having fun. 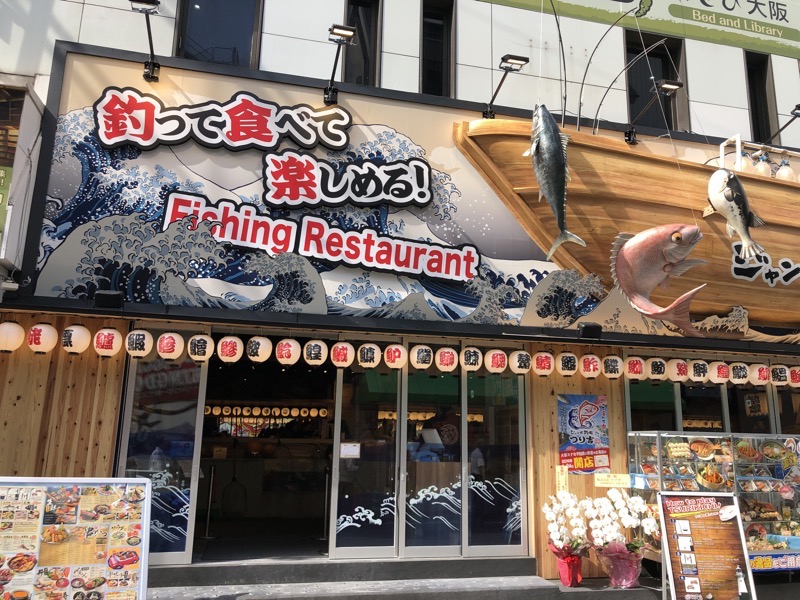 You come in, take up a seat have a look at what fresh fish are in the tanks, then buy some bait for Y100 and borrow a rod and go fish to catch your lunch. 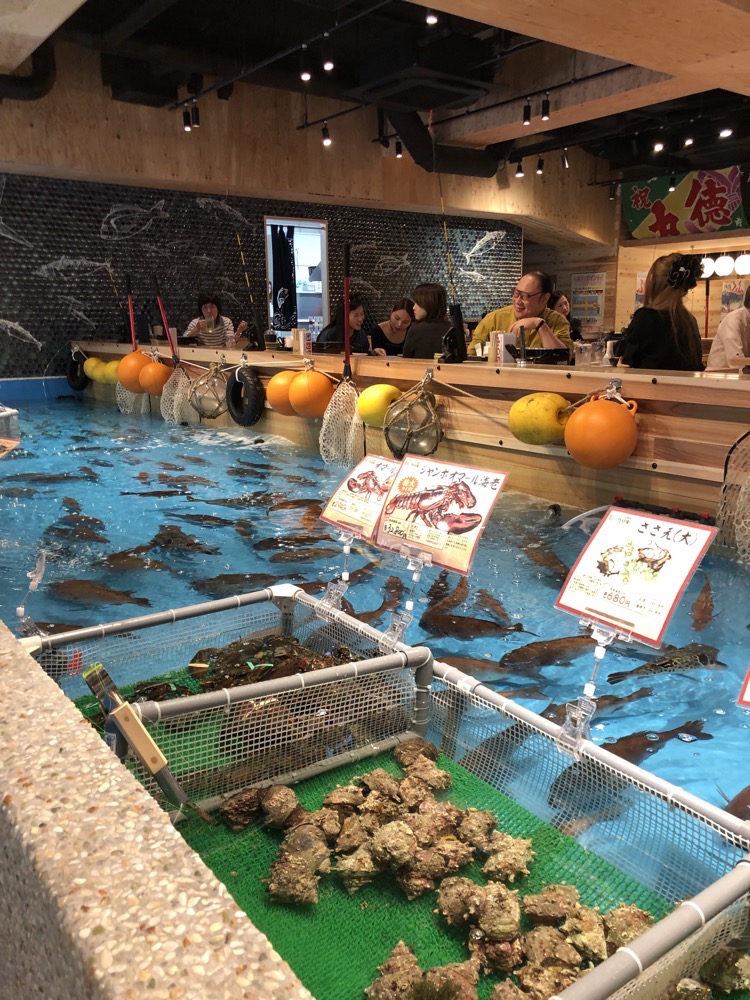 The variety of fish was incredible, several types of white fish, shrimps, crayfish, blowfish, shellfish and all sorts.  The restaurant smelled like a seaside restaurant from the saltwater tanks and people seemed to be having a lot of fun fishing.  I wanted to have some salmon and tuna though, so I didn’t have to fish for those.  🙂 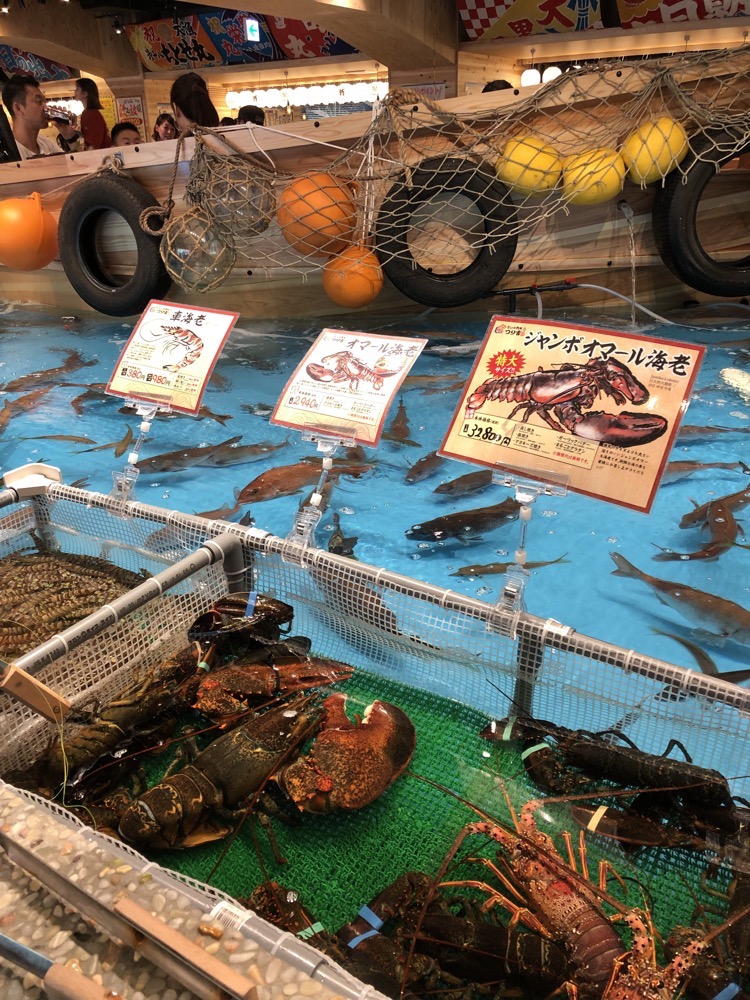 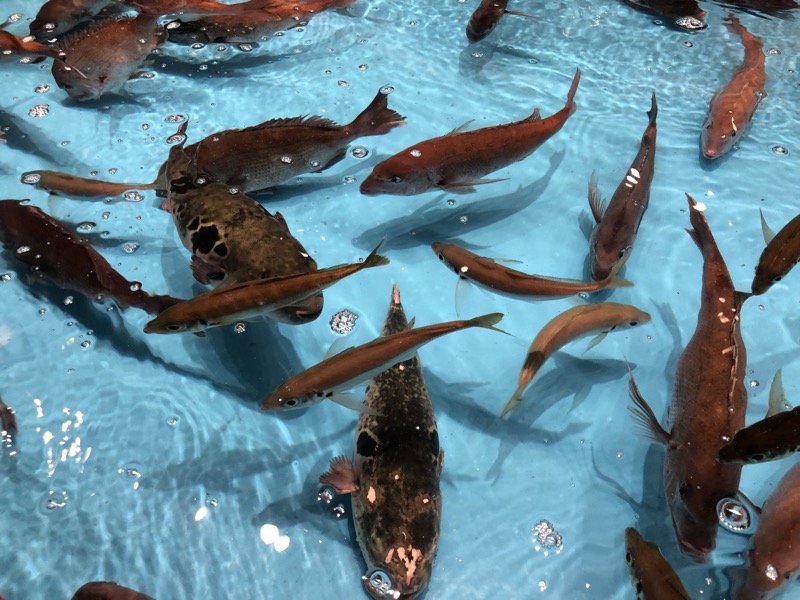 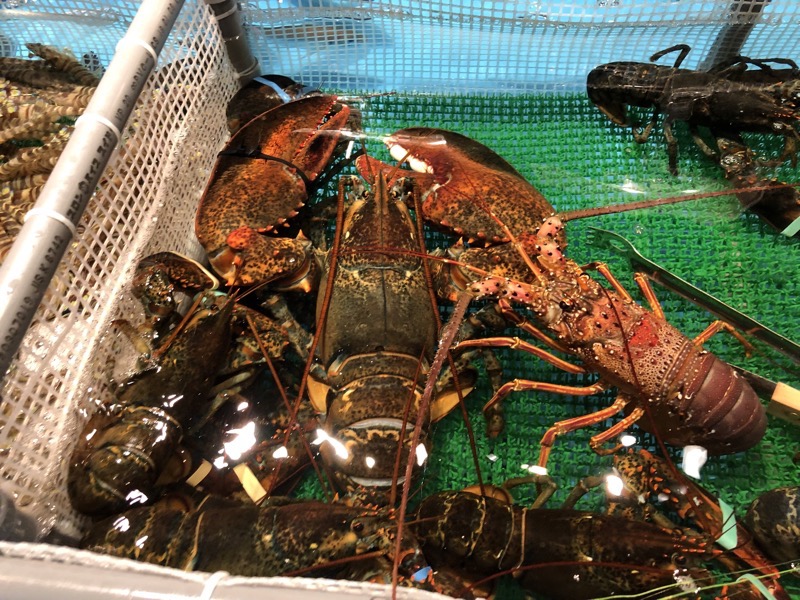 This restaurant is brand new, so new it’s not even on Google Maps and I was unable to find the name of the place in English.  I did find what is obviously another restaurant in this chain… it was exactly like this place: 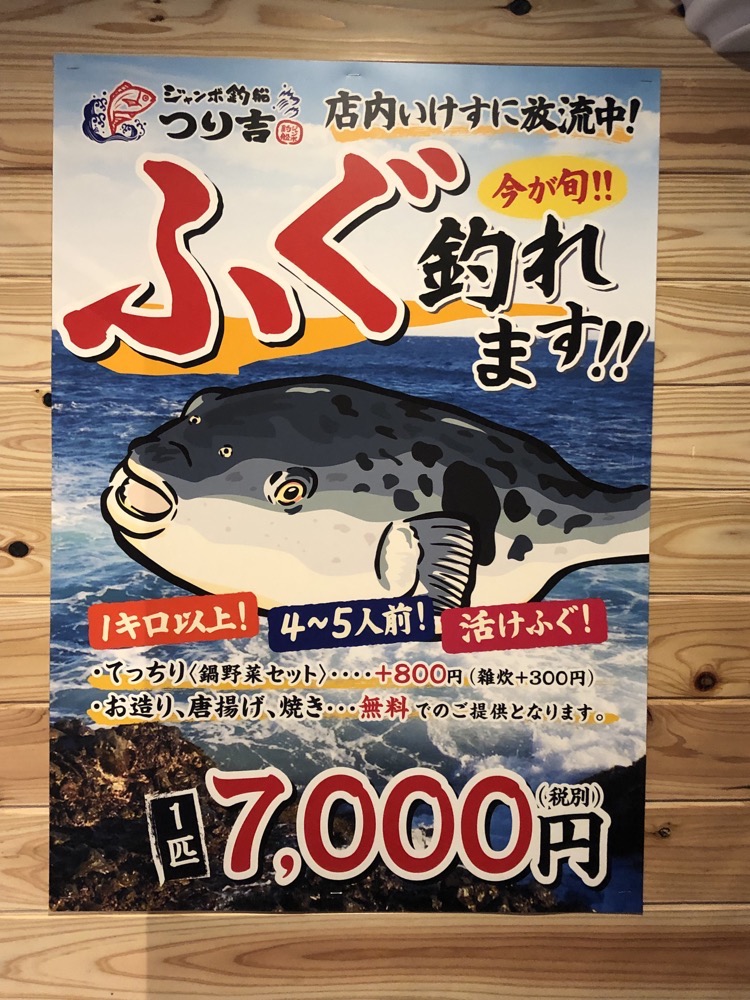 After you catch your lunch, the sushi chefs will prepare it for you and voila!  Fresh to the table. 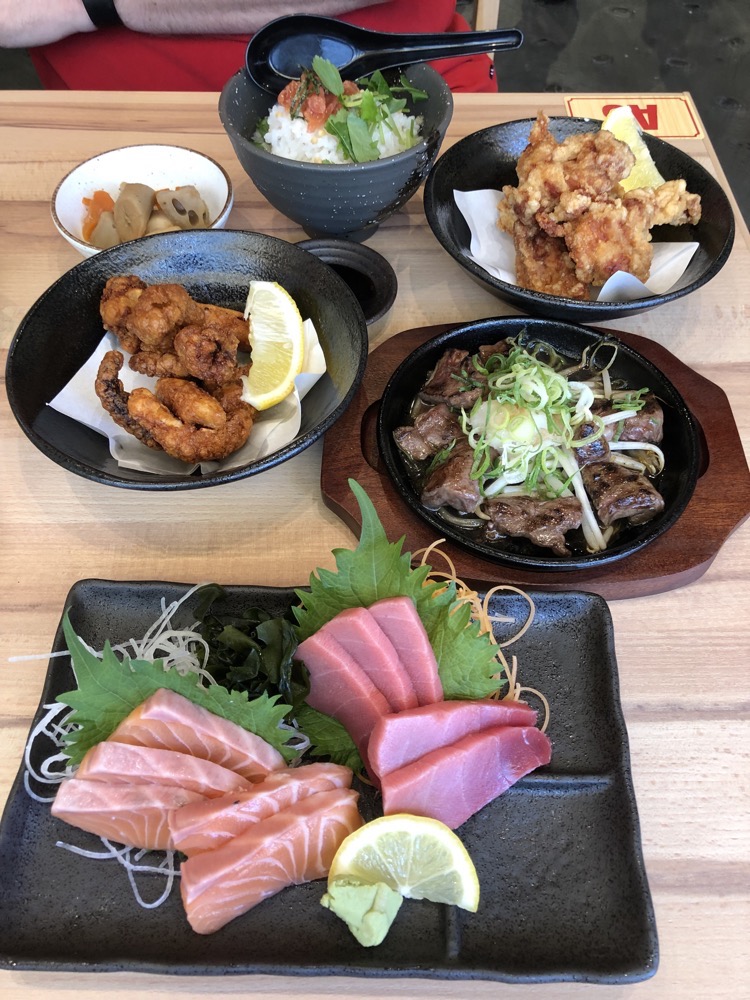 After lunch, we did a bit more shopping.  Today we also went to a Kintetsu department store so I could have a bit more of a dig around the kimono and accessories department.  This lovely ensemble below is JPY388,800, which is roughly AUD$4,986.00 – and I’m not so sure that includes all the accessories depicted. 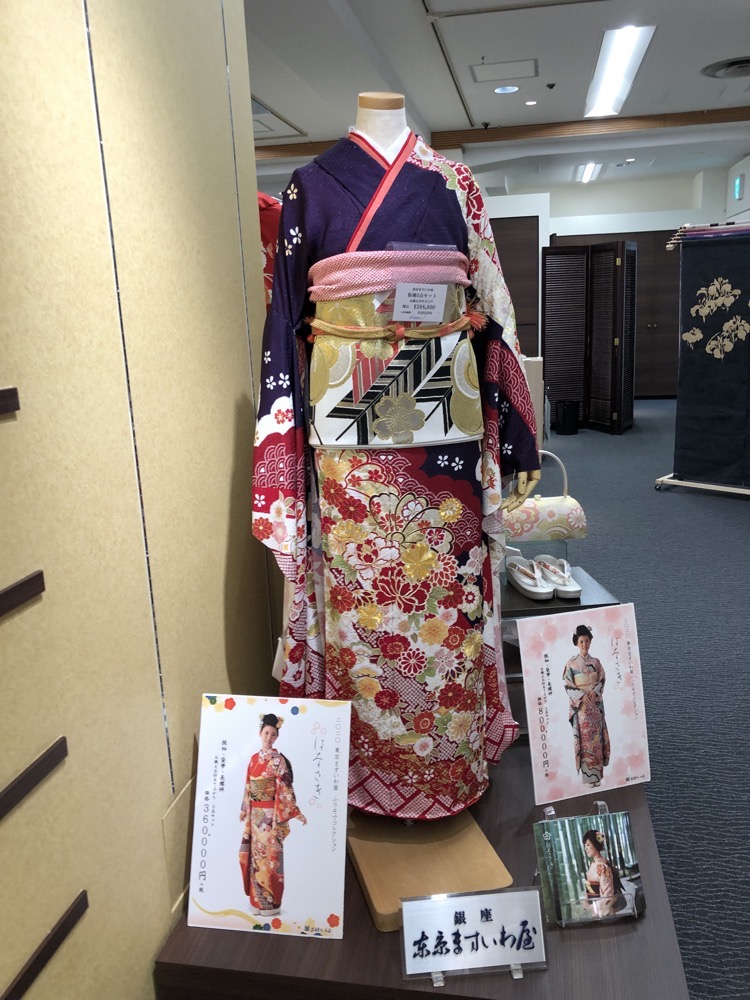 The fabrics are simply gorgeous, and while most of these modern fabrics are no double machine made, I can only imagine how much time and effort went into making elaborate kimono prior to industrialization. 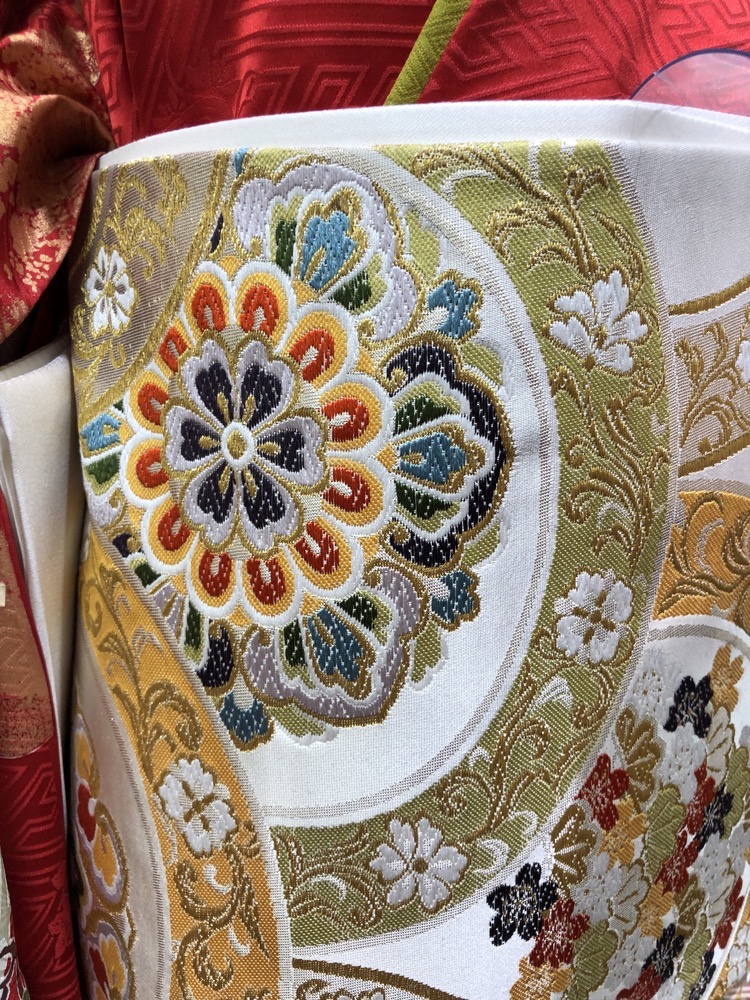 I adore the hair ornaments which is what I really came up here to look for – by ‘up here’ I mean the 8th floor of the department store – seems most large department stores have a traditional dress section and it will usually be located in homewares, which will be above the two levels of food hall (one of which is confectionery), followed by cosmetics and perfume, then two floors of ladieswear, one floor of menswear, one of childrenswear and then onto the homewares etc. So if you want to look for these lovely kimono and accessories, you need to keep going up. 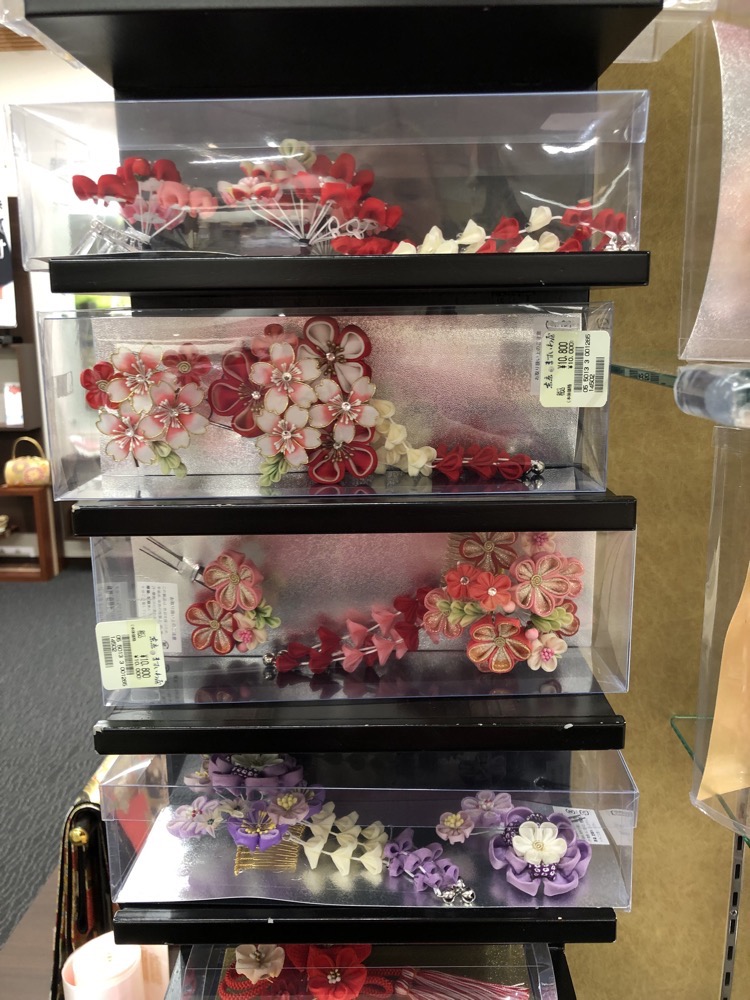 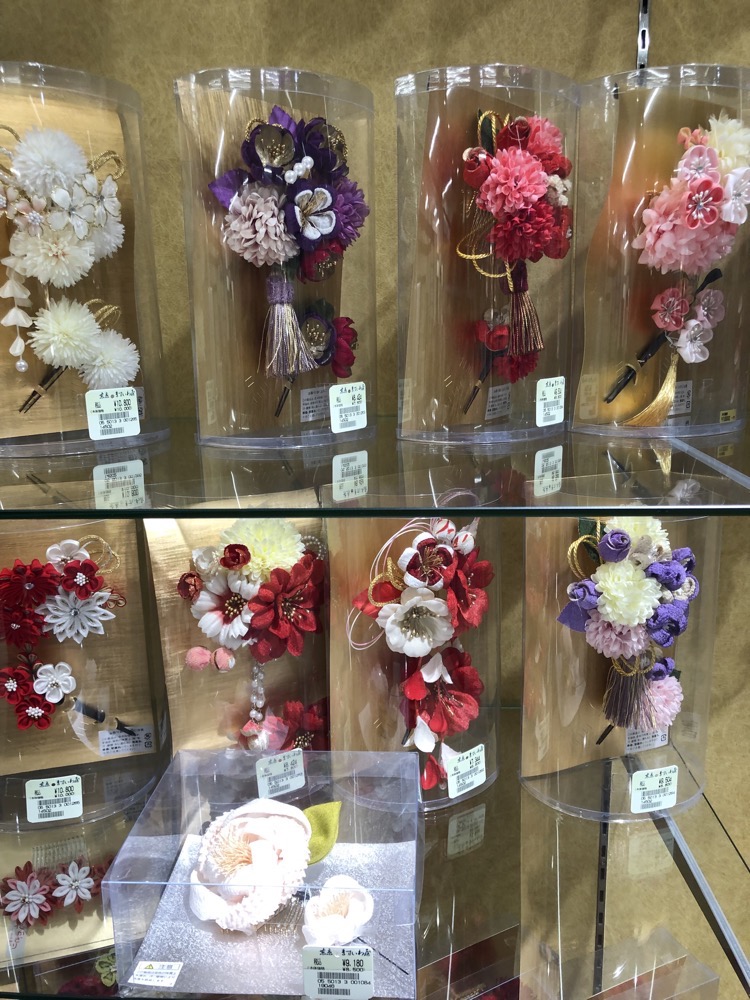 After our shopping was done, we went back to the hotel to get some work done and have a bit of downtime this afternoon.  Tomorrow we are transiting out of Osaka which is promising to be hectic – dragging our luggage through several train stations with Golden Week crowds – yay!

We did end up going out for dinner though and found a tiny ramen noodle bar not far from the hotel.  I’m not overly fond of the soggy noodle, but found a slow-cooked pork dish and some gyoza to wash down with sake for barely AUD$10.  So no complaints here! 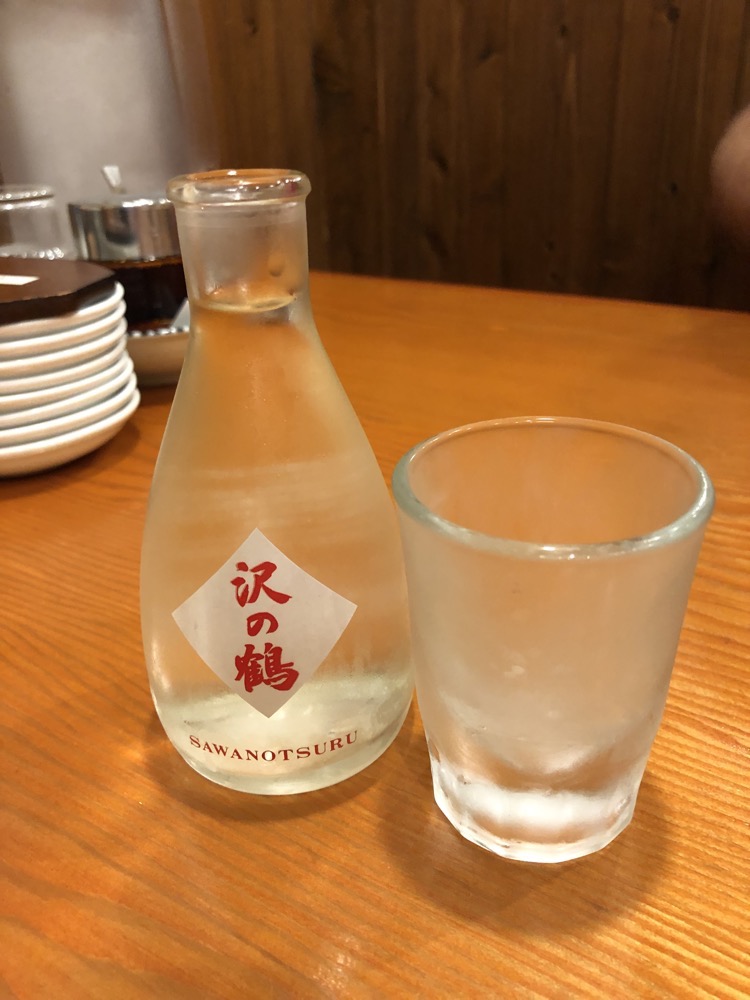 Mr K about to chow down on his ‘Double Happiness Ramen Noodles’. 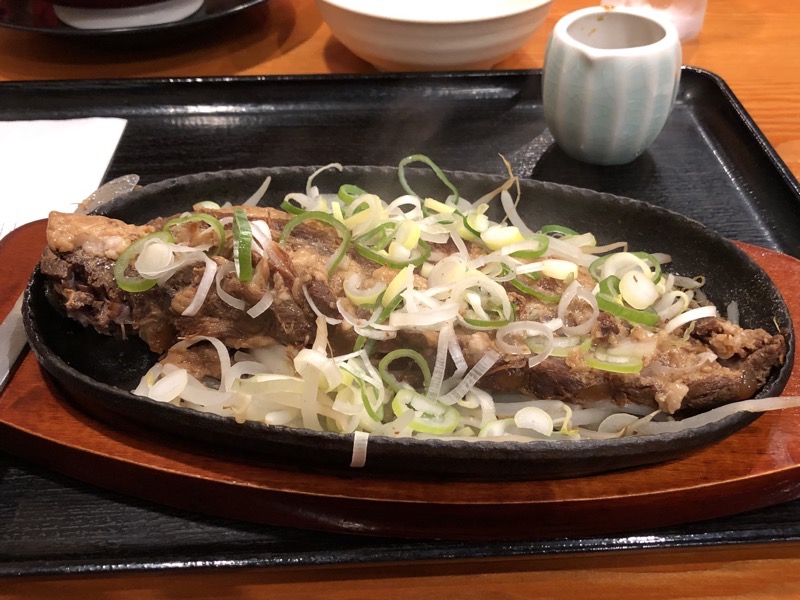