Being known as I am for impulsivity and acting on whimsy, I decided today to take the Small Child and my nieces, B1 and B2, to the range.  Now, the reason Borys doesn’t normally do things like this without prior planning is because of the inevitable logistics involved…

Shooting Checklist For Taking Newbies to The Range –
Hearing protection for everyone: check.
Eye protection for everyone: check.
Closed toe shoes all round: check.
Rifles suitable for children: check.
Pistols suitable for children: check.
Ammo for various firearms: check
Hats, water bottles, wet wipes: check, check, check!
Form 33 for unlicensed shooters: check.
Photo ID:  Ah… damn and botheration!  Knew it’d be something.
Quick call their Dad who rides to the rescue on his Harley, like a man on a mission in black leather… and: check. Photo ID obtained. Lastly and very importantly, a partner in crime to help adequately supervise these three so I don’t, well you know, get one of them dead or maimed or something: check (Thank you Yale!)

We get down the range, go through the mountain of paperwork required to sign on two by licensed and membered adults and three by unlicensed juniors – and while this is somewhat tangential, it always annoys me that the kids are asked to sign their own Form 33 in order to legally shoot as unlicensed shooters under Section 53 of the Weapons Licensing Act.  Every time we go down to the range, they ask the Small Child to sign his form himself. At which point, I always bring it to the attention of the people processing this paperwork, that as a minor he is unable to enter into legal contract and is not legally considered to be of mature mind and sound judgement in order to sign ANY legal declaratory document.  No one working there ever thinks it’s odd they are asking a child to sign a legal government declaration?!?!  But I digress…  Fortuitously as we are wrapping up all the legal mumbo jumbo a ceasefire is called and Yale hightails it out to the 50m berm with some targets and a staple gun so we can hit the ground running.  B1… B2… Ears on kiddos, lets go! 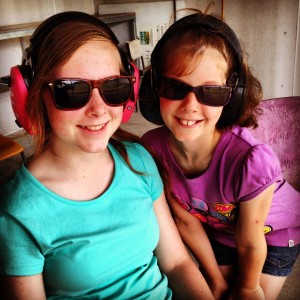 As it turns out, 50m was a bit on the ambitious side, especially considering I had a new CZ455 Super Match .22 rifle which only has iron sights – no scope for the kidlets!  I really want the Small Child to learn to shoot the way I did.. open sights, good posture, good breathing techniques and steady hands before he gets too used to always shooting with scopes. Given it was the first day out of the box for this beautiful rifle (I really love it by the way) the action is pretty stiff and the kids found it a little hard to handle. 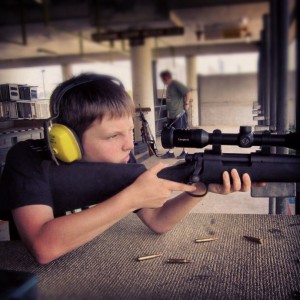 Additionally not being used to the open sights at all meant they weren’t landing many on their targets… even Yale and myself were shooting a little high with it at 50m while getting used to the sights.  So we moved benches and shifted some targets down to some 25m frames and the kids started to see some results for their efforts.  We gave them a couple of shots with Yale’s .223 Remington 700 so they could feel the difference when shooting a rifle with recoil and the grins of delight were fantastic… you can see the concentration on the Small Child’s face as he lines up his target with the .223.

Taking kids to the range can be really stressful… mistakes can’t just be ‘rubbed out’ like at school, so you have to work hard to get and keep their attention when there is so much exciting and loud stuff going on around them.  I imagine it’s a bit like trying to teach math in the Main St of Disneyland.  You have to frequently reiterate your safety instructions, and I mean, numerous times… ‘broken record’ amounts of times (tedious but very necessary).  You may have to repeatedly demonstrate the mechanical actions of the firearms until it feels natural for them and they gain a bit of confidence.  You have to ensure that boredom doesn’t creep in while they are waiting their turn to shoot, bored kids will play up without fail.  You need to make sure you don’t give a child a gun that is going to be too much for them and potentially scare them off.  And also, very importantly, you have to make sure you don’t allow your charges to interfere with the enjoyment of others using the range (something I wish other parents on the range would pay more attention to their kids from time to time).  Getting and maintaining their attention for the entire duration is key and it’s back to basics all day long until things we take for granted – like keeping the firearm pointed down range at all times, becomes second nature. But it works, look at that trigger awareness while she is listening to instructions.  🙂  Well done, B2! 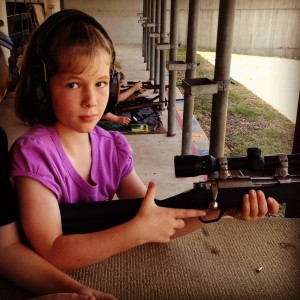 After we did a bit of bench shooting, we went down to the pistol range and had a go at some rimfire semi-auto .22 pistol shooting using my Beretta 87 Target pistol.  As it turns out a perfect handgun to start kids on as it is ergonomically sound for small hands, is light weight, has little to no recoil so it’s not scary, and it’s ‘Beretta is better’ smoothness of operation made it easy for the kids to handle.  In no time they were changing magazines themselves, working the slide and dropping the slide lock all the while maintaining good muzzle awareness and keeping those little fingers out of the trigger until they had acquired their targets!  I think these kids followed instructions much better than some of the newbie adult shooters I’ve taken around on RAM and RAW (now RASA) days!  They also got to have a few shots with the 9mm Beretta 92 Combat… which B1 and the Small Child really love, but which B2 chose to avoid – I think she felt it was a little on the scary side of powerful after watching B1 shoot it.  All up we had an awesome, if somewhat exhausting, time and I’d happily take the girls back to the range again. 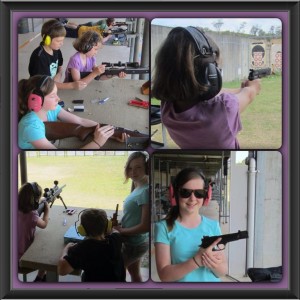