I’ve started trying to write this paragraph four times now (this is the fifth attempt) and each time I have deleted the sentence to have another go at trying to get my thoughts out.  Today it’s been two years since my Dad passed away and I’ve been feeling really unsettled for the last couple of weeks realizing that so much time has passed already.  Last year, I was still feeling very melancholy and was trying hard to remember my Dad the way he was before MND (Lou Gehrig’s disease) but this year, I’ve been quite wrapped up in what changes the last two years have bought to my life.

Being of a conservative generation and possessing a calm, steady and even temperament – my Dad wasn’t an overly demonstrative man so whenever he talked to us on personal or emotional topics it always carried significant weight and usually left an indelible impression on his daughters.  Before my Dad’s illness had deteriorated to the point where he lost his ability to talk, he sat me down and told me that he was very worried for me with all the IVF treatments we had been going through (Yes – my Dad was the one in the room with an insidious terminal disease and he was concerned for MY wellbeing) and told me how much it pained him to see us going through the continual round of surgeries and hormone treatments, the increasing financial burden and the emotional devastation of repeated failures.  At the time I didn’t know how to respond except to try and reassure him that it wasn’t that bad and that we were holding up okay.

A couple of months after that I had another discussion with my father about IVF and I told him that we were giving it away as we had decided we’d done all we could… and I lied to him and told him I have the Small Child and Mr K and that our little family was all that I wanted it to be.  He seemed visibly relieved to hear that I’d given up trying to have a second child… but the truth of the matter was that Mr K and I had decided to put it on hold until after my Dad’s inevitable death.  The physical and emtional stress of IVF, the grief of a recent miscarriage and three years of pain watching my mother struggle and my father slowly die certainly took its toll.

Dad passed away quietly in his sleep early on a Sunday morning 21 January 2007.  My Mum called me at 5am to tell me he was gone.  Unfortunately, I had been at a party until 2am and was still legally way over the limit so I had to wake Mr K and the Small Child so Mr K could drive me to my parents home.  When I got there my mother was in tears, my older sister BigSal was likewise messy and my younger sister was in her car driving up from Bryon Bay.  I was feeling overtired, overwrought, still judgement impaired from the wine the night before and somehow – totally numb.  By the time my younger sister arrived she, my Mum and BigSal had all been crying for hours…. while I had been phoning the extended family, the funeral directors.  It wasn’t until I called Edouardo at nearly midday that I felt myself become tearful.  This was in no small measure attributable to the distance that had sprung up between us (his wife hates us) and his obvious sorrow at not being around during my Dad’s last years.  It was an emotionally draining day – one which I wish I had faced without the haze of sleep deprivation and a hangover.

The next day, Monday was the day I was scheduled to start my first full time job in many years.  Strangely enough the position was with Goliath, the very same organization my father had worked at for 37 years.  I mulled over and over whether I should show up or not amidst all the emotional turmoil… when I did finally decide to turn up for work on that Monday morning, it was largely due to my Dad’s pragmatic outlook – he was never one to sit around feeling sorry for himself and he wouldn’t applaud me for doing so.  I knew I could sit around with the family watching them continue to cry or I could go do something useful… in this regard I am just like my Dad.

I remember that first day feeling really rather shell shocked and wondering if our friends and family world would think me a heartless baggage for showing up at work the day after my father died.  I vividly remember thinking ‘What the fuck am I doing here?’ while we filled out a pile of paperwork.  I remember having to tell the Induction trainers that I was going to need time off in that first week to meet with the funeral directors on Tuesday and the whole day off to attend my father’s funeral on the Thursday.  I remember the way they looked at me like I had suddenly sprouted a second head or something and said ‘should you even be here?’  I remember assuring them that I was fine so long as I didn’t have to talk about it…. to this day I’ve wondered why I never had the nervous breakdown I feel I so rightly deserved back then.

I remember spending my evenings that week feeling overwhelmed at what I’d gotten myself into with that job (I was hired to be a Wireless Broadband Consultant… me!  With zero IT experience!)  I also spent my evenings that week putting together a slide show of photos of my father that I had been collecting since his diagnosis.  I felt the need to remind everyone that Dad was not always sick and immobile and stuck in that fucking wheelchair.  I wanted to remind everyone that Dad climbed mountains, went white water rafting, fixed cars, loved camping, laid bricks, cooked a mean BBQ, liked a beer and a laugh.  I wanted everyone to remember him as he was…. not the shell of himself he had become from MND.  It was really important to me to try and overshadow the sad memories of his last years by reminding everyone what he was like before. 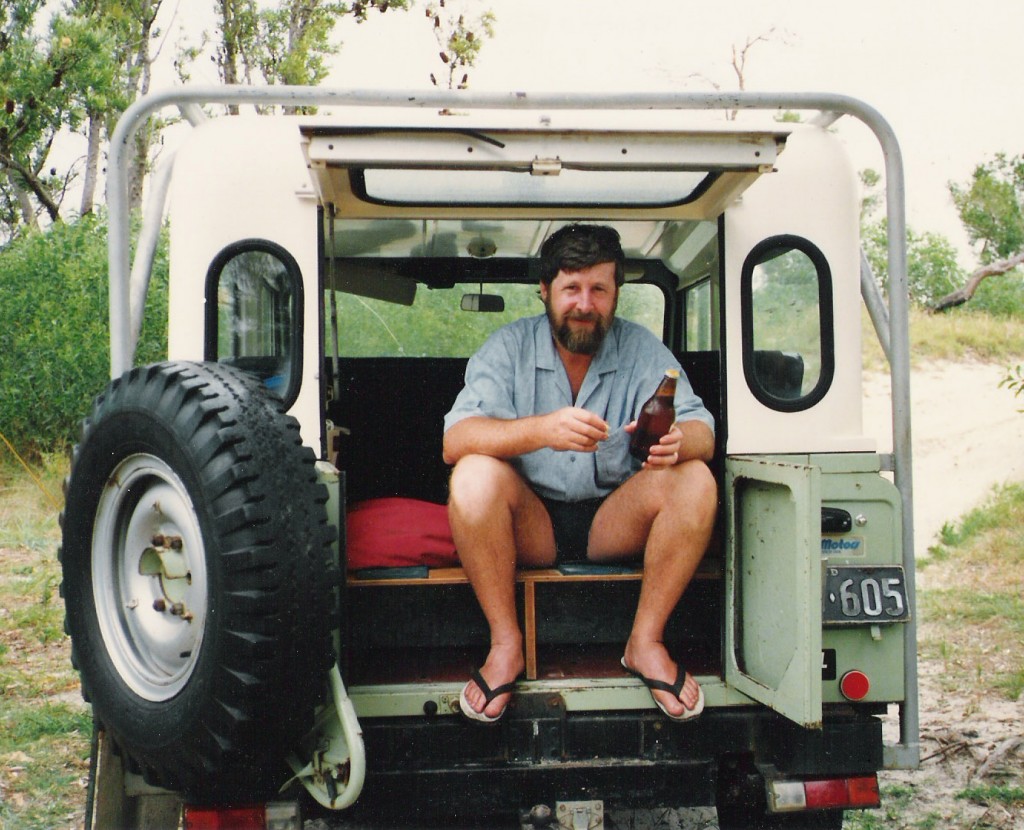 I put that slideshow to music and burned it to a disc that we could take to the chapel for his memorial.  The music was The Verve’s ‘Bittersweet Symphony’ as this song reminded me of my Dad going skydiving when he could barely still walk.  It reminded me of how he hung in there doing as much as he could while he still could.  On Wedesday before the funeral I shared it with my Mum and my sisters and my sister BigSal didn’t like the song.  I said it was done and I didn’t have the energy or the motivation to redo it.  She then did something that I don’t think I’ve fully forgiven her for… she complained to our mother who then came to try and convince me to change the song.  I still can’t believe she dragged my Mum into such a petty thing on the day she was burying her husband.  It is beyond belief.  In hindsight it may have been her way of trying to control things, something, anything during a time when everything felt out of control… I don’t know.  I do know that instead of spending the morning of my father’s funeral with my family at my parent’s home I was stuck at my PC redoing the video because my sister wasn’t coping.  Instead she wanted it set to Bert Kaempfert as it was one of my Dad’s favourites but it’s was so 70s lounge music uptempo and all solemnity was suddenly lost.  So I redid it a third time to Jeff Buckleuy’s ‘Hallelujiah’.  As you can imagine it was heartwrenching and left now a dry eye in the place, not even Fr Ray managed to hold back the tears – Fr Ray who has had the misfortune to preside over the funerals of many of his friends over the years.

Through some damn miracle, though I know not how, I managed to get through that week, and the following weeks of training at Goliath.  I was working ostensibly to help pay down some of our IVF debts.  I was supposed to be working to give us a boost in the lifestyle department (we hadn’t had a family holiday for years) and I was supposed to be going back to IVF and my ten little embryos that I have in storage in 2008…. that was until a stupid woman in a fancy RX8 failed to stop and rudely ripped the rug out from right under my feet sending me headlong back into a world of unending pain, stupor inducing drugs, restlessness, hopelessness and (I admit it) depression.

So with my father gone now two years am I thiking about him?  Or am I wrapped up in my own petty problems?  I know he’s been more on my mind over the last few weeks… mostly the little things over the holidays .  I’ve been thinking about my Mum a great deal and wondering how she was feeling whilst being reluctant to broach the subject when I spoke with her earlier.  But today mostly I’ve been thinking about how the last two years feel like they’ve been wasted.  I haven’t been able to work since the fucking moron with the RX8 damn near killed us. I haven’t been back to IVF as we had planned and I don’t honestly think my body could with a pregnancy, nor do I think a baby could survive my ridiculous pharmacological regime.

Right about now, I really wish my Dad was around to figuratively slap me upside the head with some sound advice or a wet haddock… which ever was nearest to hand.  😐
.