As some might have gathered… I’m not overly fond of the Christmas season.

My memories of Christmas as a child were mostly positive.  We usually had Christmas in Toowoomba with my Dad’s family – my Grandma and Poppa, my Aunty Penelope* and Uncle Phucker** plus their five kids.  We’d often stay up late watching The Sound of Music on TV on Christmas Eve (strange Toowoomba programming of the 70s – go figure) . My grandparents had a tacky silver foil Christmas tree with very old post-war Christmas ornaments and we’d have a big roast dinner cooked on Grandma’s wood stove even though it’d be 30 odd degrees in the shade.  The ‘other’ Cross kids used to get much flashier gifts than we did but I guess that was mostly because my Mum was always one for choosing more practical things.  The kids would usually spend the morning playing with any new toys while the Mums cooked and the Dads sat around shooting the breeze.  In the afternoons we kids would be occupied having watermelon seed spitting competitions and basically running amok while the adults cleaned up or had an afternoon kip.  So most of my childhood Christmas memories were pretty good I guess. 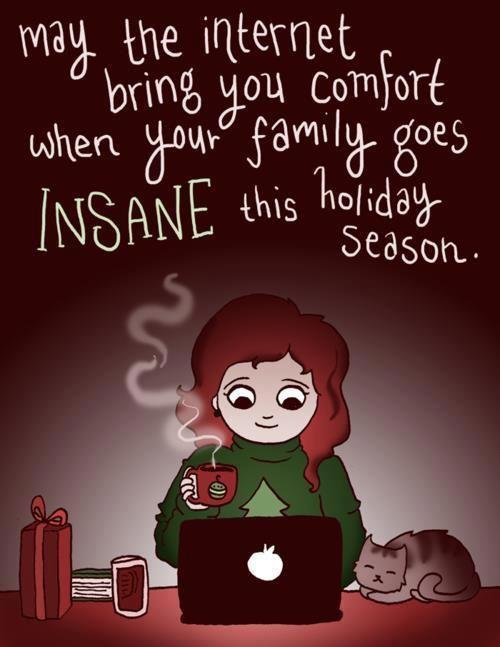 As I’ve gotten older Christmas started to be a time of stress.  Mr K’s parents are separated so for the last decade we’ve been pulled in up to three different directions at Christmas time.  His Dad lives in Canada but often visits in our summer to avoid the Canadian winter so they’ve sometimes been here at Christmas and keen to spend Christmas with all of us given that they’ve come so far.  His Mum lives just across town but they have little other family in Australia so there’s a palpable sense of obligation to try and spend Christmas with them.  The seemingly innocuous ‘what are you doing for Christmas this year?’ questions start right about the same time the stores put out all their decorations at the end of September and I’m often keenly aware of a feeling of ‘trying to keep everyone happy’.

And of course I’ve gone from being a kid running around letting Christmas happen around them to often being given the job of playing the (sometimes reluctant) hostess with the mostess.  I could kid myself and say that it’s because people love my cooking or because they just enjoy hanging out with us but the truth is that it has more to do with our house having fully ducted air-conditioning and our very comfortable 10 seater dining table  :S

In more recent years we’ve had some pretty stressful situations to deal with at Christmas time.  One Christmas I ended up in hospital with a golden staph infection in my abdomen and was only discharged from hospital the day before Christmas.  Another year we were delivered the news of my father’s terminal MND diagnosis two days before Christmas which I don’t have to tell you does not make for a joyful and celebratory mood.  There was at least a couple of Christmases where we were convinced that it would be my Dad’s last… which again isn’t conducive to an enjoyable family reunion and then last year, we were very concerned for my Mum who was spending her first Christmas in nearly 40 years without my Dad (she wisely chose to run away and spent Christmas with her sister in WA).

All up I think any childhood fondness I had for Christmas has been largely overshadowed by the feelings of family obligations and the stress of recent unhappy associations.

If I could skip Christmas entirely I would.