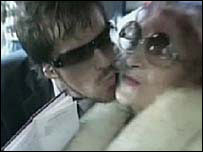 A 24-year-old Argentine man has married a woman 58 years his senior.

The groom, Reinaldo Waveqche, told reporters after the ceremony in Santa Fe, northern Argentina: “I’ve always liked mature ladies.”   Mr Waveqche added: “I don’t care what other people say.” He and bride Adelfa Volpes, 82, are planning to travel to Rio de Janeiro for their honeymoon.

Asked if the marriage was purely spiritual, Ms Volpes laughed and replied: “There is going to be more.”  The couple were married in a civil service after several years of engagement, and later walked through a local church surrounded by reporters.

Their love blossomed when Mr Waveqche went to live with her after his mother’s death when he was 15.

He said he admired his new wife’s zest for life, and emphasised how special she was to him.