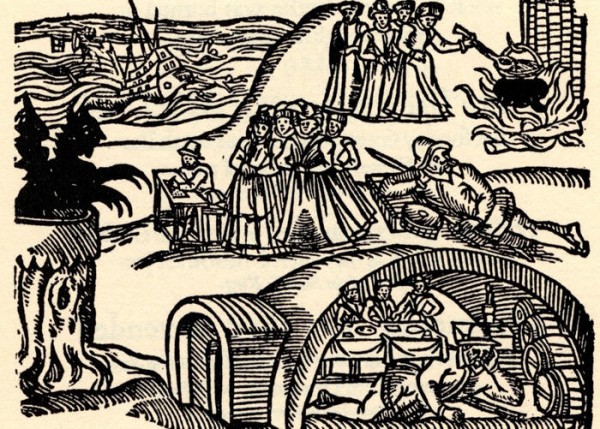 James I believed the witches were trying to conjure up the storm to kill him by sinking his ships!  Such evil forces in the world back then.  And obviously there’s evil forces at work today too…

For Hurricane Sandy is no normal hurricane or cyclone or post-tropical cyclone or just plain old storm.  Labelled the ‘Mother of All Storms’, ‘A Monster Storm’ and the ominous sounding, ‘Frankenstorm’ – it can’t be the result of something mundane, rational and scientific like global warming or climate change.  Can it?  No, far more likely that there’s medieval witchcraft at play here.

Or, we could take the word of John McTeman, a well known wack job fundamentalist Christian preacher, who claims the storm is more proof that “God is systematically destroying America” as punishment for the “homosexual agenda”!!!

It’s up to you people… Is this ‘once in a generation’ monstrous storm the result of – Climate Change?  Medieval Witchcraft? Or… the Democratic Homosexual Agenda?

Saw this article this morning on the Courier Mail website and shared it on Twitter… as you do, because well… nepotism in general really pisses me off:
The Courier-Mail    Brisbane 17°C – 24°C. Cloudy, mostly fine, light shower. PREMIER Campbell Newman has now claimed another cabinet minister suggested to Arts and Science Minister Ros Bates that she take leave ahead of this week’s parliamentary sittings.

The Courier-Mail revealed on Saturday Ms Bates had suddenly taken two weeks off on the same day as Transport and Main Roads’ boss Michael Caltabiano stood aside over allegations he misinformed parliament about his work history.

Ms Bates and Mr Caltabiano worked together at lobbying firm Entree Vous which was part owned by the Minister and her son Ben Gommers – who is now employed as a senior departmental liaison officer at TMR.

Although her office said Ms Bates was on annual leave, on Saturday Treasurer Tim Nicholls declared the Minister was taking time off on the advice of her surgeon.

Ms Bates underwent shoulder surgery on September 13 and has been wearing an antibiotic drip since.

Today Mr Newman faced questions about Minister Bates – who was videoed driving and shopping on the Gold Coast on the weekend.

He said he and the Deputy Premier, Treasurer and Attorney-General, were all concerned for Ms Bates’ health and one of them asked her to take leave – but it wasn’t him.

“I did not, I just said the Deputy Premier, the Treasurer and the Attorney-General and myself were concerned about her health so we asked her to take some leave but I did not,” said Mr Newman. “I know (Deputy Premier) Jeff Seeney has for some time wanted her to take some leave.”

The Premier said it was not appropriate that he ask Ms Bates about her previous working relationship with Mr Caltabiano – who has denied having any professional experience of Mr Gommers, or even working for Entree Vous.

Mr Gommers’ appointment to TMR after the March 24 election, is the subject of a Crime and Misconduct Commission investigation.

“It is not appropriate that I investigate ourselves,” Mr Newman said.

“The people of Queensland would qutie rightfully say that me investigating the conduct of Mr Caltabiano or Minister Bates was not correct. That’s why I’ve referred it to the Ethics Committee.”

He said he had not spoken to Mr Caltabiano since he stood aside while the Ethics Committee investigates statements he made to the budget estimates hearing.

Mr Newman said if he was found to have committed an offence, he would be expected to repay legal costs currently being funded by taxpayers. We had a good look, but couldn’t find the page you requested.

This is either because:

If you think this may be a technical error, please contact us and let us know the location of this page.

ARTS Minister Ros Bates has issued a statement to explain her absence from parliament this week, saying she is recovering from shoulder surgery and caring for her son Ben Gommers who has been diagnosed with depression.

The statement ends days of conflicting stories from the government about her leave – which began abruptly last Thursday coinciding with the decision by Transport and Main Roads’ Director-General Michael Caltabiano to stand aside over allegations he misinformed parliament about his work history.

Ms Bates and Mr Caltabiano worked together at lobbying firm Entree Vous which was part owned by the Minister and her son Ben Gommers – who is now employed as a senior departmental liaison officer at TMR.

Her office told The Courier-Mail on Friday she was on annual leave, then on Saturday Treasurer Tim Nicholls said Ms Bates had been advised by her surgeon to take two weeks off.

Today Premier Campbell Newman said Ms Bates had been asked by senior Cabinet Ministers to take leave, out of concern for her health and how she was coping with the “extra stress” of recent weeks.

Ms Bates said she had accepted medical advice that she required “further rest” adding that her “attempts to return to work (since surgery on September 13) had been premature”.

“During this period, I’ll be spending time with my son Ben who has been under enormous stress and continued scrutiny from often incorrect and sensational reporting of his chosen career,” said Ms Bates.

“On Monday, October 22 Ben was admitted to hospital to be treated for depression.

“He remains under the care of a specialist.”

She went on to say she would always be “a mother first and an MP and Minister second”.

“His recovery, and my own, will be my current priority,” read the statement.

The admission follows Premier Campbell Newman’s revelation this morning that senior Cabinet Ministers had asked Ms Bates to take leave, out of concern for her health.

He said himself, the Deputy Premier, Treasurer and Attorney-General were very concerned and wanted her to take time off.

“I know (Deputy Premier) Jeff Seeney has for some time wanted her to take some leave,” Mr Newman said.

The Premier said it was not appropriate that he ask Ms Bates about her previous working relationship with Mr Caltabiano – who has denied having any professional experience of Mr Gommers, or even working for Entree Vous, but who was listed on the lobbyists register in 2008 as being employed by Entree Vous – jointly owned by Ms Bates and her son Mr Gommers.

“It is not appropriate that I investigate ourselves,” Mr Newman said.

“The people of Queensland would qutie rightfully say that me investigating the conduct of Mr Caltabiano or Minister Bates was not correct. That’s why I’ve referred it to the Ethics Committee.”

He said he had not spoken to Mr Caltabiano since he stood aside while the Ethics Committee investigates statements he made to the budget estimates hearing.

Mr Newman said if he was found to have committed an offence, he would be expected to repay legal costs currently being funded by taxpayers. 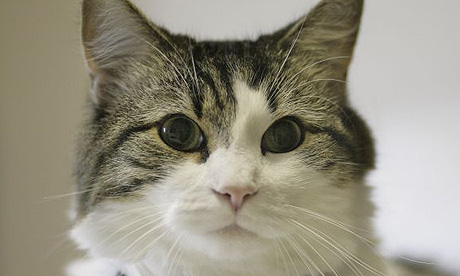 Oscar the cat at a nursing home in Providence, Rhode Island. Oscar curls up to patients hours before they die.

Don’t let your eyes deceive you. This sweet-looking fellow could be capable of downloading pornography. Stew Milne/AP

Police are charging Keith Griffin of Jensen Beach, Florida with 10 counts of possession of child pornography after finding more than 1,000 images on his personal computer.

Griffin told police he had been downloading music, and that his cat jumped on the keyboard when he left the room. He said "strange things" appeared on the computer when he returned.

He is being held in Martin county jail on $250,000 bond. No word on any charges against the cat.

Now I understand that bacon is a staple on the food chain for many peoples who seem to live on the internets for reasons I don’t begin to fathom but for me personally it’s … okay ocacionally I guess.  Rarely do I go out of my way for pig products at all, though we do seem to have ham for sandwiches and the like in the house most of the time – but I feel that hardly constitutes a particular porcine affinity or a specific swine style relationship. 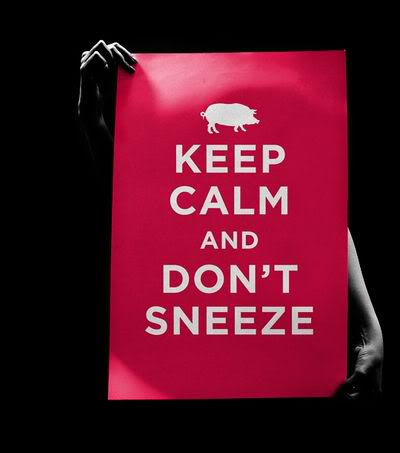 In the middle east of course they have a long time honoured and tradition heavy relationship with pigs so I was interested to note that Egypt is set to slaughter every damn pig they can get their hands on by the sounds of it… somewhere estimated between 250,000 and 400,000 piggies.  Given that there’s no current scientific argument pointing towards this being necessary to halt the ‘impending swine flu pandemic’ – that’s an awful lot of pork on your fork for a region that don’t really dig on no swine as a rule.

I was recently told that this month’s Australian’s Women’s Weekly (a magazine whose oxymoronic name is NOT on my regular reading list) has a picture of Magda Szubanksi on the cover which I am informed I suddenly have an uncanny resemblance to.  I’ve never really followed Magda Szubanksi’s career… but I know she has been in many skit comedy shows like D-Generation, Fast Forward and that fuckin’ dreadful misrepresentative parody of Australian life – Kath & Kim (God I hate that show).  Yes I know… I am generally acknowledged to be somewhat humourless… but personally I prefer to think I have a more sophisticated sense of humour and this sort of ‘lowest common denominator’ crap is just not my thing.  To be fair it’s not just tacky Australian bullshit comedy that I don’t identify with.  As it happens I also dislike shows like Little Britain or The Might Boosh and I’m not exactly into the cinematic delights provided by the Ben Stillers and Adam Sandlers et al either.

So while Magda Szubanksi is, I think widely acknowledged to be one of the country’s foremost comediennes…  I’m not a fan.  She always seems to play the same role – that of the funny but fat and unattractive sidekick.  So I’m unsure whether to be flattered or insulted to be told by many (including the Small Child) that I resemble her somewhat on the cover of this month’s Women’s Weekly…. now that she’s dumped a pile of weight and has been photoshopped to high hell of course.

I can kinda see where they’re coming from – I have a similar round face shape, similar complexion, similar hair colour and style and we also share the same square chin thing.  Given that it’s supposed to be a remarkable weight loss story I hope they haven’t digitally ‘slimmed’ her down for maximum effect.  Though with the journalistic integrity (cough, splutter) being what it is often reputed to be with these chick magazines I wouldn’t be surprised…. I wouldn’t be surprised if they have.

Personally looking at the magazine cover I think Magda and I have a remarkable and extraordinary resemblance to an iconic television star from my youth.  So I hit the photoshop too and took a photo of myself and touched it up a bit (seems fair – no doubt Magda had the benefit of a professional makeup artist and hair stylist for her picture) and I have made a new cover that I think looks much more ‘me’….

I’m really rather pleased with the results.  Not only does the new cover more closely resemble me personally… now I’m also a ballsy, karate chopping, frog-loving, prima donna into the bargain!  Much better than the funny but fat and unattractive sidekick.
.