After years of trying not to use MSN emoticons on Facebook, I finally find a useful list of Facebook emoticons to relearn.  Some of them are case sensitive and some have more than one shortcut to get the emoticon to appear… So here is a complete list of Facebook chat emoticons and their keyboard shortcuts.

I was out shopping a few weeks ago looking for a stove top for yale whose new house requires one that actually, well functions properly.  And naturally while I was there, I saw and immediately had to have a new fridge.  I am sure there is logic in there somewhere, but stuffed if I can ferret it out at the moment.

Anyway, we were at the Good Guys at Mt Gravatt, a chain known for their in the box/discount prices and I saw a fridge that would fit in the space in my kitchen just nicely (bit tight but will do the trick).  It was a Samsung 528L SRF527DSLS.  RRP on the Samsung website was $2,299.00 – which seemed a bit expensive for my liking (NEVER pay full retail, people!).  But I looked it up on the Choice website and it had great reviews, saying it was good for energy consumption, good range of temperatures available, good fluctuation (whatever that is) and good response to changes in room temperature… only let down according to the reviewers were that the controls were located on the top of the inside of the fridge door – but how often do you adjust the temperature of your fridge?

Anyway the Good Guys had it advertised as a significantly discounted price from the ridiculous Samsung RRP at – $1,649.00 (though pretty sure that didn’t include delivery), which made a good jumping off price point. 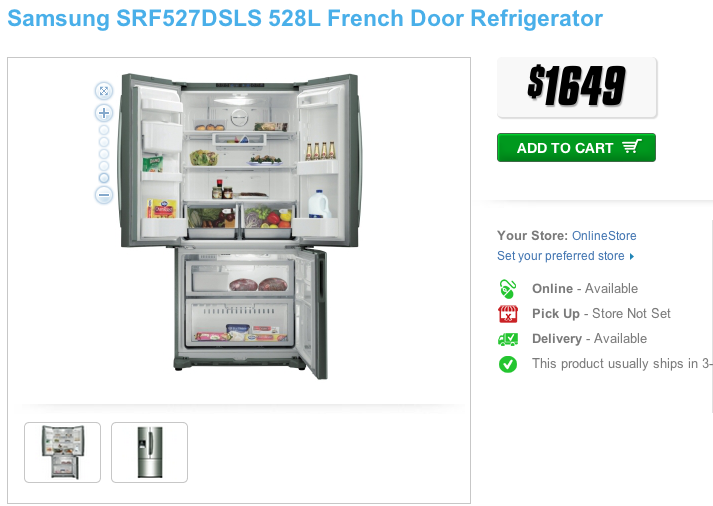 I thought I’d have a hunt around for a better price.  Didn’t bother going to Hardly Normal because well, they are always more expensive than the other appliance and electronics retailers, and lately Gerry Harvey is being a complete and utter tosser in the national political arena.  And Clive Peeters seem to have fallen off the edge of the retail planet so I hit the internets and found a much better price at a company called Appliances Online – appliancesonline.com.au being $1,439.00 which included free delivery to my postcode.  Getting decidedly better… $200 less and free delivery was sounding pretty good. 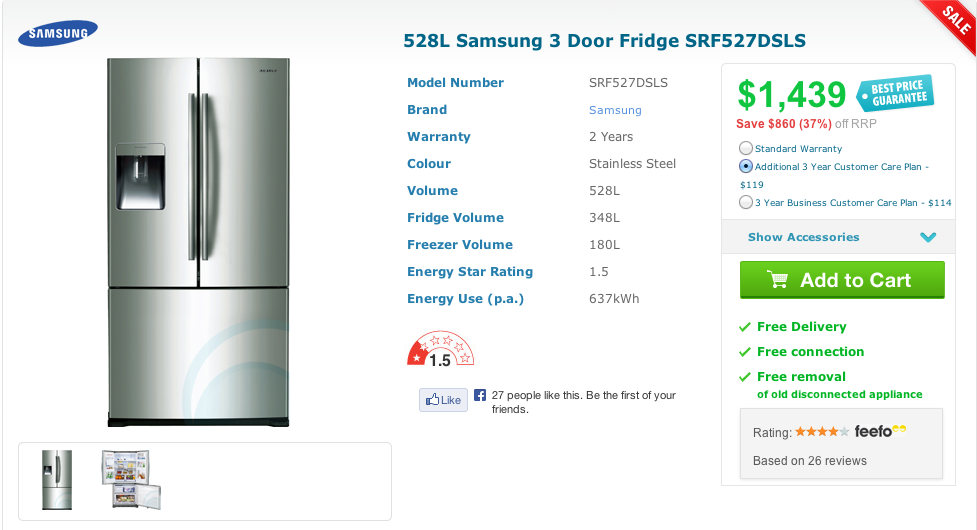 Not too shabby.  Next best price I found was from Masters – the hardware guys who have opened up near us a while back and who are attempting to give Bunnings a run for their money.  Masters were advertising the same appliance for $1,547.00 with free delivery also. 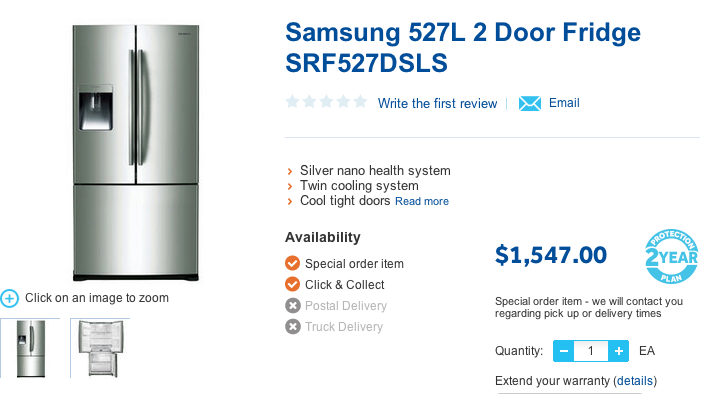 But… the best thing about the Masters mob is that they not only price match, but they have a guaranteed ‘beat any price by 10%’, including online prices.  So I had a live chat with one of their customer service representatives to ensure that when I rocked up down at the store that this would actually be the case.  And yep, sure as eggs, Masters would not only match the $1,439.00 from Appliances Onilne, but they were prepared to discount it by a further 10% bringing the price down to $1,295.10 including free delivery!  A far cry from the Samsung RRP of $2,299.00.

Now we are cooking with gas.  Just one more stop before making a decision – try the Union Shopper and see if they can beat the quoted $1,295.10.  And as it turns out… No.  No they can’t.  One of the largest buyers consortiums in the state can’t beat that price.

So, off to Masters I went.  Ordered and paid for a new fridge and arranged delivery for tomorrow… before they changed their mind!

Basic Instructions – How to be a Considerate Spouse.

Spent a side-splitting night playing Cards Against Humanity on Sunday night and was thinking… ‘I really need to get some of these, just to play with the family on Christmas Day’.  With expansions, of course.  So I jump on their website, and even though I already knew they probably wouldn’t ship to Australia, I thought I’d look for that ever elusive internet loophole.

So having a look through their FAQs… cleverly disguised under the section entitled: “Your Dumb Questions” and yeah, had my expectations confirmed – no shipping to Australia.  But, there was a small glimmer of hope:

So, I thought I’d give it a whirl in spite of of their warning:

I have the misfortune to live in an ‘inferior’ country as outlined on your website, in this case, Australia.  Yes, I know…  Anyway, as such, I do not have ready access to your excellent products through yourselves or through Amazon.

This presents a significant problem for me personally, as I have diagnosed obsessive personality traits and can not foresee any situation where home made cards would be acceptable… let alone the inevitability that would see future expansion packs printed out on inhomogenous card stock – the horror!

Naturally, this is completely unacceptable and would render my game completely unable to be played.  *twitch twitch*   Why, the very idea of it is almost as traumatizing as that time, when the powers that be, released the first two seasons of The Sopranos in cardboard boxes and then latter seasons were released in regular plastic cases necessitating the re-purchasing of the entire series!

I am therefore humbly requesting that I be allowed to order the original Cards Against Humanity party game (RRP of $25) and the First, Second and Third Expansion sets (at $10 each) and have them shipped to Australia – and, if at all possible, without an ass raping, non-lubed shipping rate!  Just this one time, I promise.

Also, I think it worth noting, that as a group of individuals that are figuratively crying out to be ridiculed, I believe the OCD community are significantly and conspicuously absent from your most excellent game, which given the propensity for absurd behaviour tics is absolutely ripe for exploitation.

Yours in date rape and child beauty pageants… 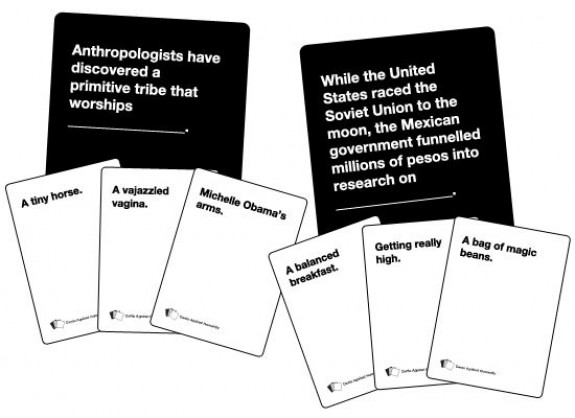 And low and behold, I got a reply this morning!  😀

Cards Against Humanity is technically only available in the US, Canada, and the UK right now . . . buuuuut since you asked so nicely, I’ll link you to our super-secret international store.
Here’s the link: http://cardsagsinsthumanitysecretshop.com/
Password: yousickfucks
A few notes:
Thanks, and good luck!
J & the CAH

TeamTa da!  Borys’ most excellent letter writing skills, strike again.  I think I should write a consumer advice book on “How To Have Your Way With Almost Anyone”.   😀

Yesterday, I got up at 2am and drove to San Francisco via a side stop in LAX to pick up the Small Child. Which is pretty much like getting up and driving non-stop to Sydney, but putting a massive stressful big spaghetti junction of highways somewhere around Coffs Harbour which was really difficult to navigate and on which everyone was speeding. Now this in itself mightn’t be so bad… but we went to a show the night before which ran from 10pm to midnight.

By the time we got back to our hotel, finalized the packing we started earlier and had a shower, it meant that I was going to bed at 12:50am and setting an alarm for 1:45am hoping for a cat nap well any type of fucking nap really.

No such luck. Just lay there waiting for the alarm to go off. Hit the road in full darkness and headed out of Las Vegas. Unbelievable how much traffic was on the highway all the was to LA given it was 2am on a Saturday morning. Managed to pick up the Not So Small Child without incident after a 4.bit hour drive, and set Sondra to take us to San Francisco.

After much more white knuckled swearing and cursing at the freeway system we eventually popped out of the city and were speeding through agricultural countryside going north. By now it was about 8am, and I was starting to get tired. So I’m having a Red Bull for breakfast (fuck that shit tastes foul), and trying to stay awake knowing there’s about 4-5 hours more driving ahead.

The countryside was so dry and arid it’s amazing anything was growing there at all. Every now and again you’d go through a green section near an irrigation channel that was obviously getting access to water. But every few kilometers or so, I was seeing signs that said ‘Say No to Congress Created Dust Bowl!’ And I have no real idea about but could make a pretty good guess. Nonetheless about 40% of vehicles on this highest were carrying produce – tomatoes, lemons, onions, rock melons and so on. None of which is overly exciting as you’re hurtling along with two sleeping passengers.

So I’m driving with Adele for company and slowly but surely turning that music volume up and up (frog in a boiling pot style) to keep me awake but not disturb them sleeping. I was turning the air con up much higher than needed and kept flicking the vents so one side of me would get really cold and then the other. I was shuffling in my seat and constantly pfaffing with the cruise control to keep my mind alert. But my most effective tool in keeping awake on this ridiculously long and solitary drive was turning my head.

Now I’m pretty sure this won’t work for everyone but I’d been in Vegas on too soft beds for four nights and no access to heat packs so my back pain was in full gear before I even left. My neck and shoulder muscles were as stiff and sore as if I’d spent the week painting the house, not playing tourist in one of the worlds biggest playgrounds. So I was at the point where turning my head in any direction, putting my chin down towards my chest, looking left of right, leaning it over towards my shoulders – any movement really – was causing sharp pain. Which meant whenever I felt myself getting drowsy all I had to do was lean my head over and I had sharp pain jolt me alert again. :S

If I felt really bad, I used my air con frozen hands and just poked myself in the neck or shoulder muscles a bit and ow, ow, ow, fuckity ow, I was wide awake again. We made it safely to San Francisco… but I one big mess of absolutely shattered right now.