I went to get my nails done this morning which is rapidly going from being a small indulgence to something I hate.  I don’t follow fashion, I haven’t been to a hairdresser since 1995 and I don’t have a shoe habit so I figure my nails are my one thing that I allow myself because I like having manicured nails (long drawn out and unnecessary explanation omitted but can be found here if anyone wants to psychobabble my ‘hand thing’ or is just plain bored enough).

Anyway, the best nail tech in the shop moved on some time ago and I’ve been basically having different people do them for me since.  Problem is… plenty of them can do as nice a job as she did but none of them are as fast.

I used to be in and out of there in about 40mins flat and now it seems to be anywhere between 60-90mins.  ‘So what?’ one might say.  Well actually it is a very big deal for me because I can’t sit still that long.  My back and neck are not at all forgiving at being forced to be so sedentary for that extended a period and on occasion I’ve had to leave with my nails half done and once other time I took off for half an hour and had to come back to have them finished.

I’ve heard all sorts of stupid stories of how much pain women endure in the name of beauty but I’m not talking about plastic surgery or brazillian waxing here… I’m just talking about getting a manicure which shouldn’t be inherently painful!   Honestly this is getting to the point where I am asking myself if it’s worth it.

I really like having lovely feminine looking hands with manicured nails… but I can’t stand the ramped up back pain it’s causing me  🙁
.

I like watching people type sometimes… especially if they have aesthetic pleasing hands 🙂    Strong masculine hands or slender well manicured feminine hands or if someone can touch type really well and it looks like they’re fingers are floating across the keyboard.  I quite like typing myself though I rarely watch my hands while I do so… especially since I got this DasKeyboard and there’s absolutely no point at looking at the keyboard while you type.

Yeah I know it’s a weirdness but it’s my weirdness so I don’t think we really get to choose whether or not we put up with them.  Shrug.  To add to the whole hands and typing weirdness I am prepared to admit that I like words that can be typed with one hand… and where this particular little strange psychological tic comes from?  I have no idea.

and everyone’s favourite longest English word typeable with the left hand alone – stewardesses.  Sigh…  the crap that has no right taking up valuable memory real estate in your head – I don’t know!

Anyway there’s heaps of them.  I’d probably feel a little strange owning typing weirdness if I didn’t already know there were hundreds of websites out there devoted to words typeable with just one hand…  and isn’t that just the one true virtue of the internets?  Letting us know we’re not alone with our weirdnesses?  🙂
.

Ordinarily I don’t think I’ what you call squeamish.

I can tell you all the gory details of how all nine of my TVEPU’s were done (Trans-Vaginal Egg Pick Up).  It’s an IVF procedure where they stick a massive needle up your cloaca and pierce it through the vaginal wall using ultrasound guidance to aspirate all the fluid from each of the oocytes on  your ovaries after a grueling three week schedule of injecting yourself with hormones.  I can discuss how I had to give myself a timed intramuscular injection into the deep tissue on my thigh.  I happily talk to anyone about various date palm spikes gone through legs, am happy to watch eye surgery on television and hear stories of misadventures with nail guns, chain saws, boat propellers, wood lathes, insinkerators and what have you….

…. so long as they don’t involve someone’s hands…. shudder And then it’s a different story entirely.  Yaleman cut his hand at work yesterday…. and it makes my stomach lurch just thinking about it.  I can’t stand to hear someone talking about having an injury to their hands without physically cringing and feeling my nauseous.  I once had a nice run in between my left index finger and a medical scalpel which I was using in a manner other than directed by the manufacturer.  This irresponsible use of said scalpel resulted in my slicing my from the tip of my left index fingernail down through the nail and right down to the knuckle cutting right through the skin, ligaments, nerves and into the bone.  Naturally this necessitated a quick run to the nearest doctor and there were stitches required to put it all together again.  Happily the doctor was wrong when he said I’d have an awful scar and likely loose all movement and sensation of that finger.  But even still I’m not totally sure that is where my hand injury aversion/squeamishness stems from.

I love hands, I have a folder full of pictures I have snavelled off the internets of beautiful expressive hands.  I’m reluctant to call it a fetish, but it certainly does lean in a fetish sort of direction.  I like having my own hands beautifully manicured and feel unattractive and unfeminine if I let my nails go unattended.  In men I look for large masculine capable looking hands more than I look for a handsome face.  It’s just one of those weird ‘me’ things and it’s been getting steadily stronger over the years I think…. but I’m not entirely sure why.

Could be worse I guess …. I could have a thing for earlobes or something.  🙂

Products that allow a girl to let her inner tomboy all hang out.  It might be a bit of a limited market and I know most chicks who are ‘into’ cars don’t normally like identifying as  ‘typical females’  :)….

I think these are a bit of me!  Now all I have to work out is – does it come in Suzuki Supreme Red 🙂 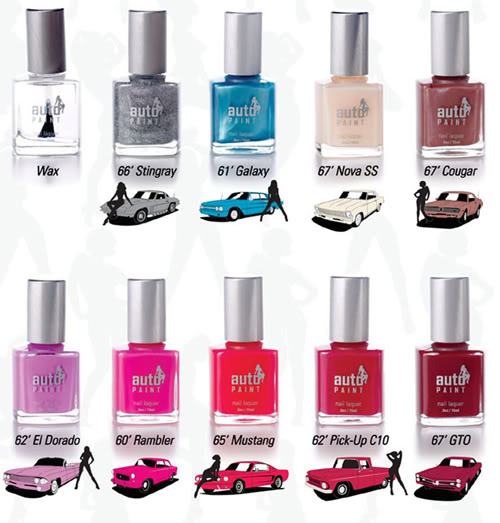