Up bright and early again this morning for the drive to Mostar… the road took us along the Neretva River to Mostar, in the southern Bosnia and Herzegovina. It was a simply gorgeous drive… seriously this was the colours of the water and the sky – I haven’t touched these at all. The water we are told is also very cold year round, which is why we didn’t see anyone swimming in it even where there are obviously points where holiday makers could access the water. 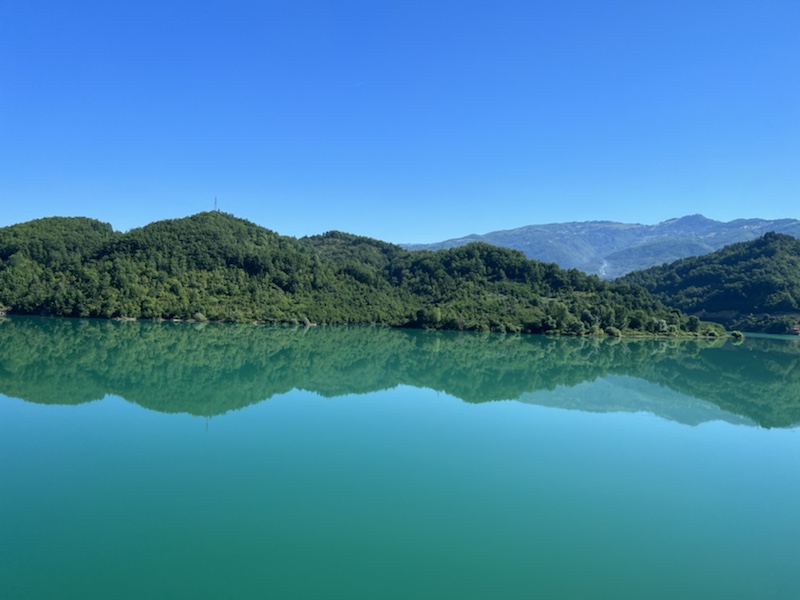 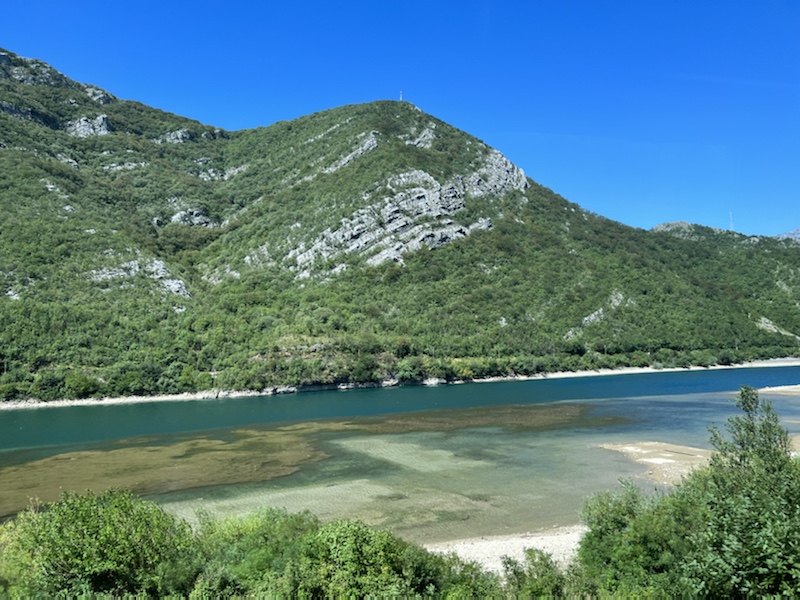 Our drive also took us past the most unusual roadside services I have ever seen! This chef is cooking lamb on a rotisseries powered by water wheels! They must get super busy because he had about 9 full lambs on the turn at once while we were there. The meat is only lightly seasoned and cooked for hour – and then they serve it all super fancy-like by cutting open a fresh white bread roll and slapping some meat on it. No butter, no gravy, no sauce, no nothing… it looked like way too much bread for me, but I tried some of Angus’ and it was delicious! Made a mental note to do a lamb roast when I get home before the weather starts to heat up to much! 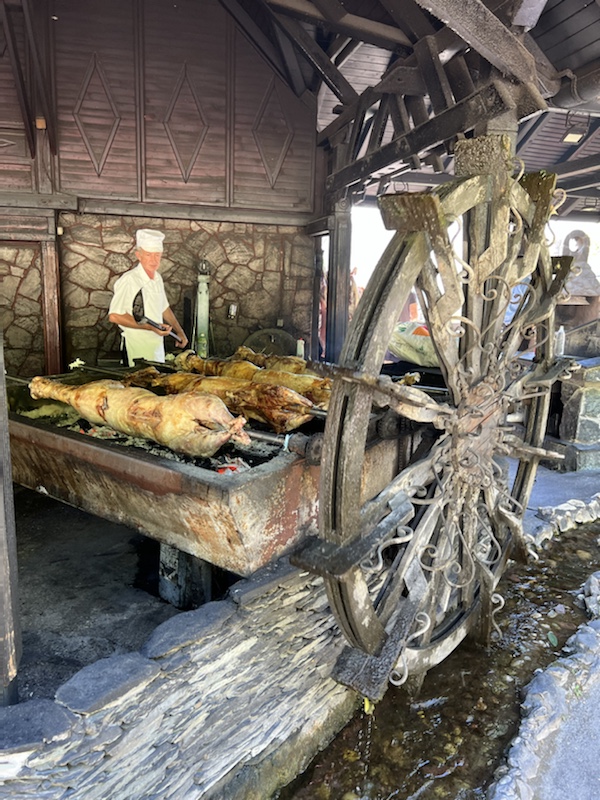 This is the gorgeous Holly, from Wangaratta who is travelling with us – you can see the size of the bread rolls they plonk the lamb onto, which is why I passed. On the way int Mostar we saw many old buildings that were bombed and shot up during the war, Many of them have never been repaired – sometimes because the owners just never had the money and of course the longer you leave it, the harder and more expensive that proposition becomes, but also because many people fled the city and became refugees in other parts of Europe never to return – so it is difficult to prove who owns many of these buildings now. 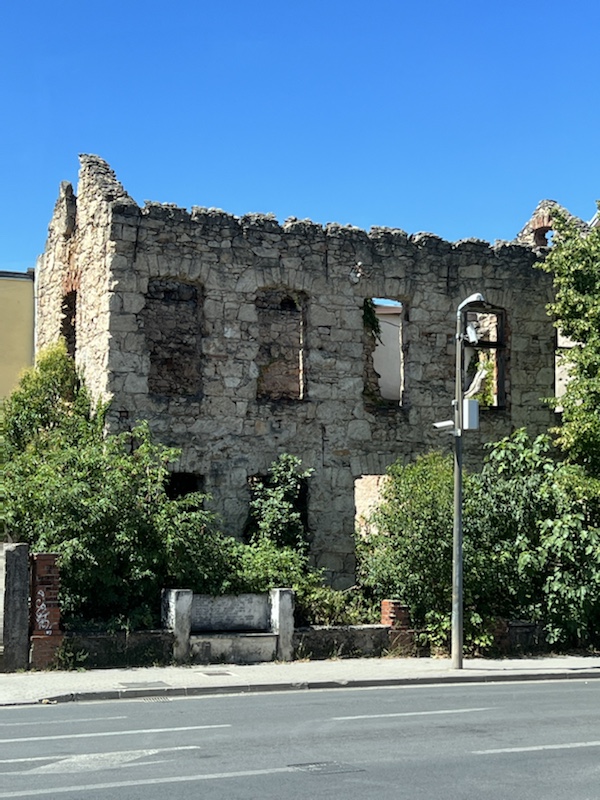 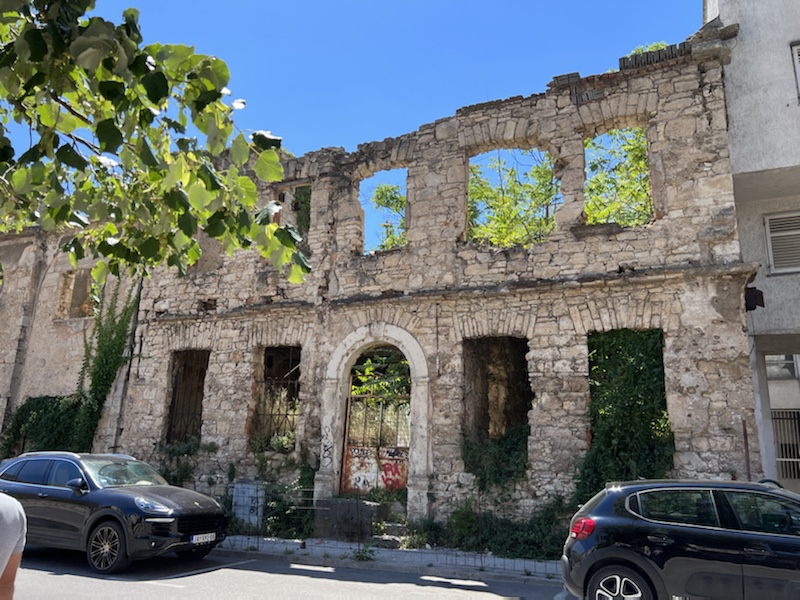 Mostar is a windy little medieval market town – unfortunately full of tourist dross now, though I imagine it would have been a thriving little centre of produce and fresh food etc back in the day. 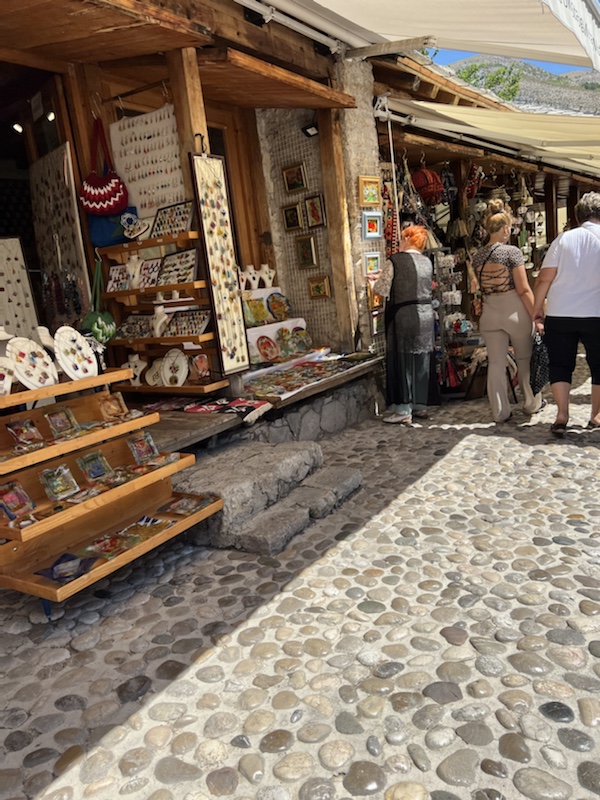 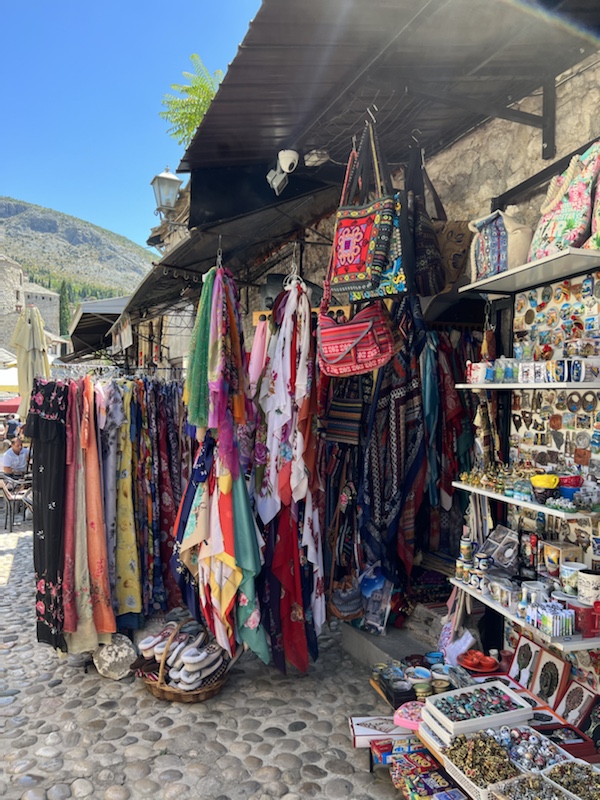 Ah, the famous Stari Most (Old Bridge); a reconstructed medieval arched bridge which straddles the middle of the town and connects the winding alleys of the market with a staircase which leads tot he Koski Mehmet-Pasha Mosque. 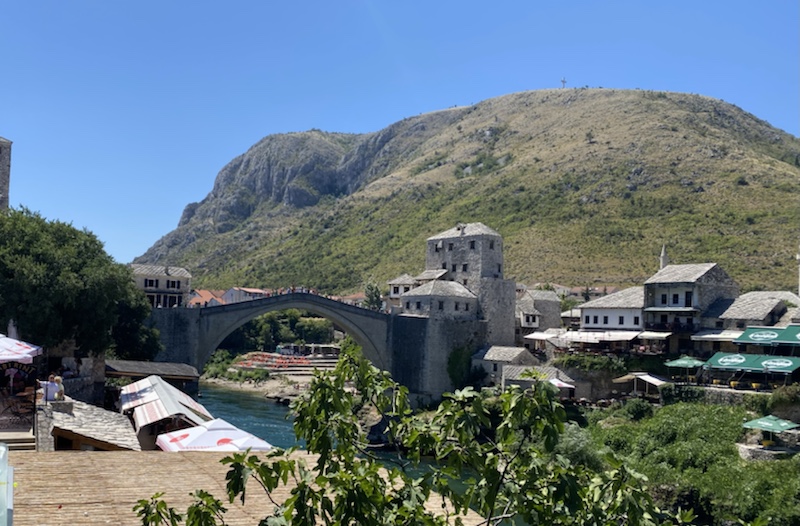 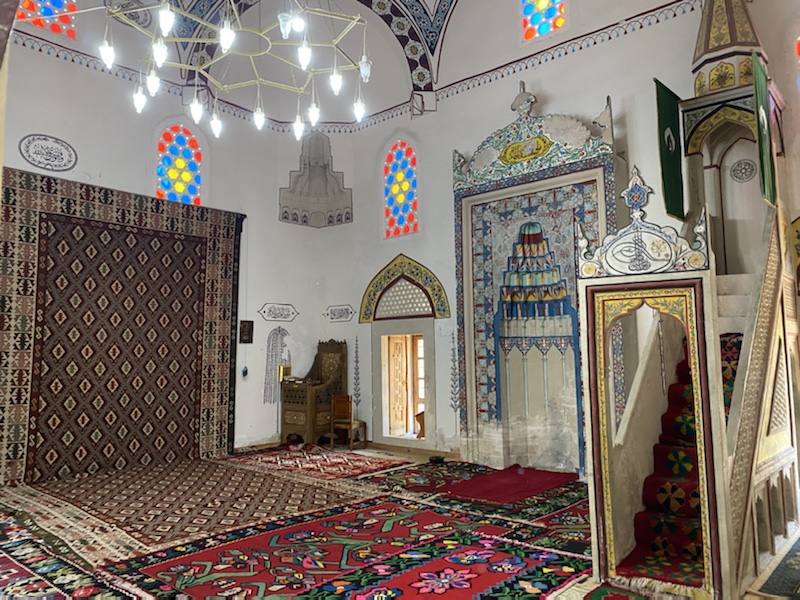 It’s probably one of the smallest mosques I’ve seen, and while Mostar is home to about 100,000 people, most of them do not live in the Old Town area. 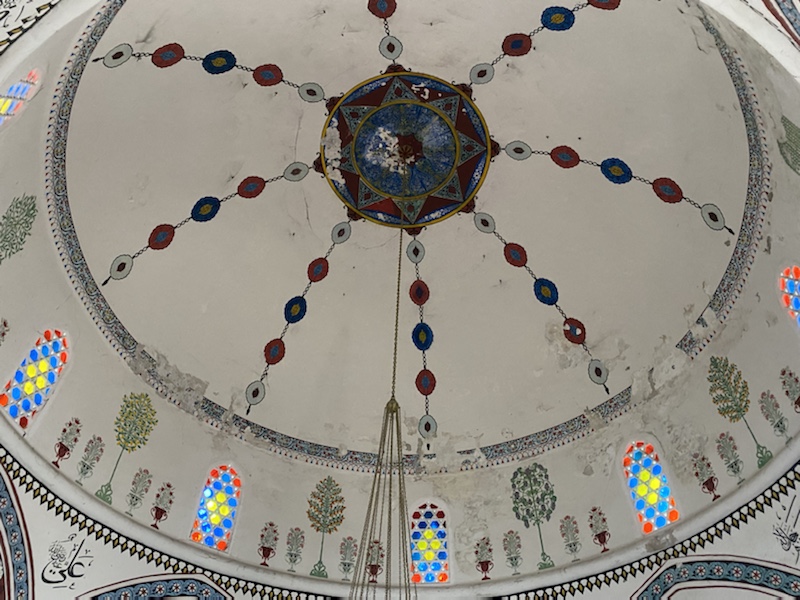 So there is a weird tradition where visitors can come here and jump off this bridge into the really cold water below – tit seems like a stupid thing to do and it really it! The bridge is 24m above the river and the river just here is 5m deep, the reason it’s really stupid is that it’s often about 38-40°C+ in Mostar, and the water is 5-6°C, which can cause people to go into shock, and there’s that whole, jumping off high places can lead to broken bones and death thing as well. Reassuringly they’ve only lost 4 people in the last 10 years… :{ and honestly there is absolutely no reason to do this except it kinda comes with bragging rights – no one, and I mean NO ONE will be surprised to hear that of the visitors log that shows some 3800 people that have jumped off the bridge, 80% of them are fucking Aussies. Brain dead the lot of us! Oh well, the other ‘fun’ to be had from standing around the bridge is watching and waiting to see locals jump. Many of these guys must have been doing this for years… they prime up the crowd, get people chanting, hand around a hat for people to throw their money into to encourage the guys to jump. They then climb outside the fence line and make a show that they are going to jump, and then get people cheering some more before one of them eventually dowses himself in cold water… so as to soften the shock a bit. If you don’t see them throwing water over themselves, they’re not jumping any time soon apparently. Seems to be one local goes in every half hour or so… and there’s no need to be standing up on the hot bridge to see them – I found a nice spot in a cafe with some ciders and saw two guys jumping. Mad as cut snakes. 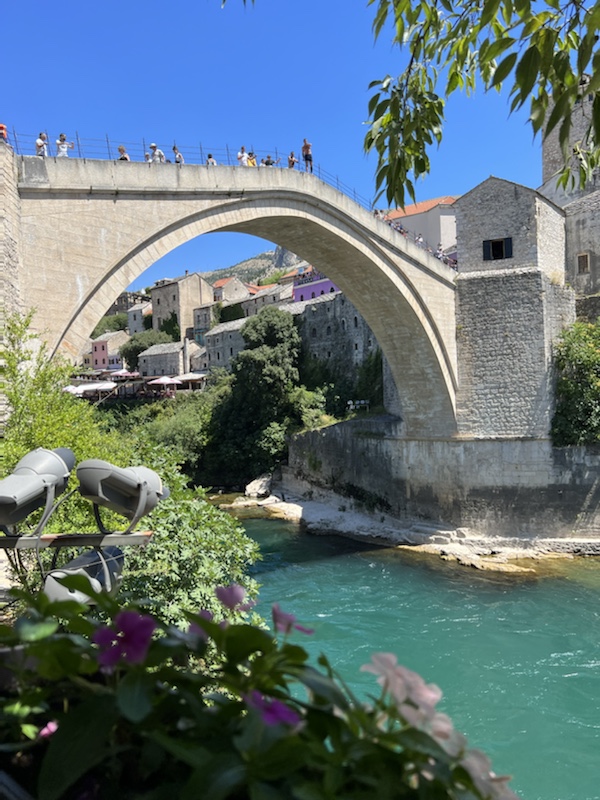 After Mostar we went to Kitivice Waterfalls, which I thought was going to be a National Park or something – but fuck was I wrong! The whole place is like a waterpark without any water slides. Loads and Loads of people all swimming at this massive man made waterhole at the bottom of these gorgeous waterfalls. The water temperature of the falls was quite cold apparently, but the pool below was relatively warm once you got in. 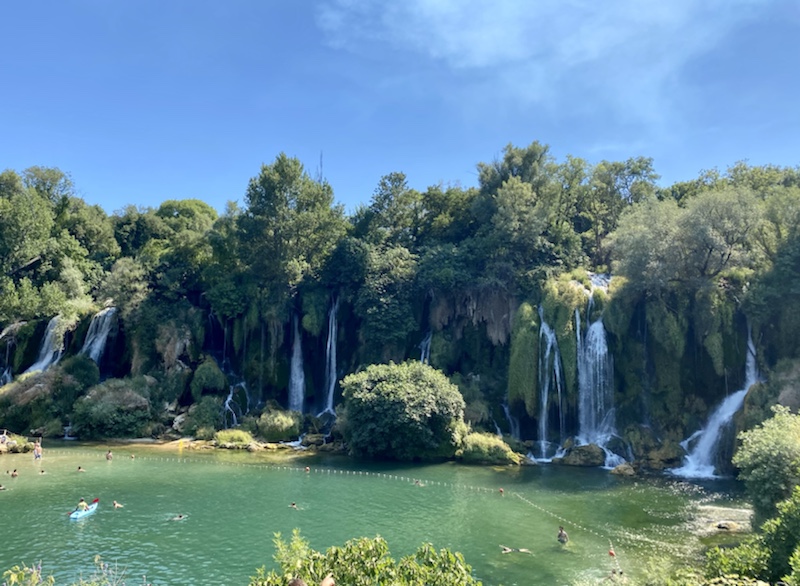 I just can’t imagine a place of natural Australian beauty being treated like this – complete with huge decked beer gardens, food stands and kids playground right beside it. It’s impossible to get a nice photo of just the falls. 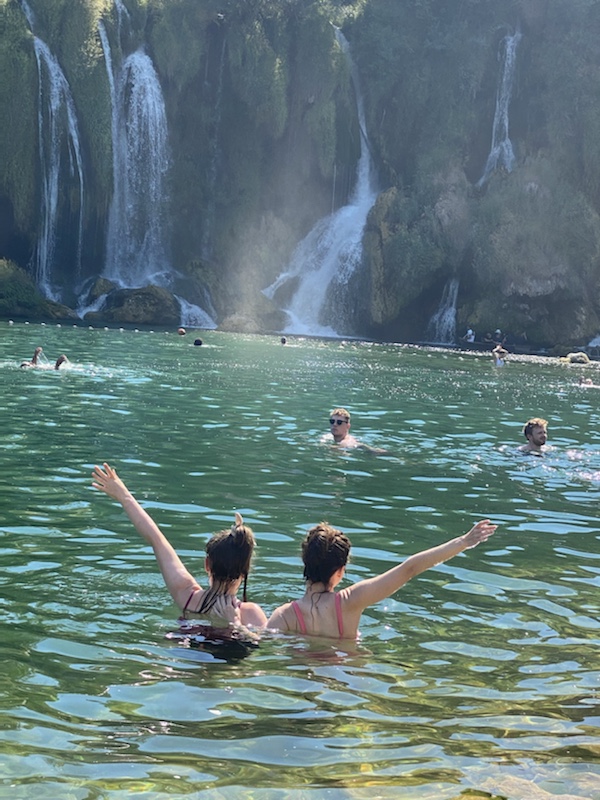 After this stop, we drove onto Trebinje where we will stop for two nights and everyone is very excited about this because it means we can maybe get some bloody laundry done! Lol. 🙂