We had a lovely relaxed morning in Essaouira yesterday before making our way back to Marrakech by public bus.  I knew that this trip had some public transport in it – and initially, I was thinking, ‘Well, that could really suck’.  But turns out I was concerned for no reason… this is not Turkey c.2007 apparently – the bus driver is not allowed to smoke, use his phone and drive in the middle of the road here – so me and Moroccoan ONCF bus services can remain friends. The transit was the best type of transit. Uneventful.

Our group checked into our various hotels – most of us at the Moroccan House Hotel in Marrakech, and we checked into the Trois Palmieres, some four doors up from the rest of the group.  There was something about the very noisy electrical box in Room 45 that made us feel like the hotel might burst into flames or electrocute one of us when plugging in a phone that made us not want to stay there again.  We had informed Intrepid, but they didn’t seem to share our safety concern, so we just ended up repaying for the booking.  It was a good move; worrying about spontaneous combustion is rarely conducive to sleep (all that watching the bushfires unfold on the news back home was probably not helping).

Tonight was the last night of our tour and a farewell dinner with the group.  Across the two back to back groups, we have been fortunate to be travelling with simply wonderful groups of people, from London, New Zealand, Brisbane, California, Melbourne, South Africa, Quebec, Ukraine, Greece and Victoria, BC.  And of course, our Intrepid leader, Samirr who is originally from the High Atlas Mountains, but now lives in Marrakech.  We don’t usually do group tours like this, so were pleasantly surprised to have met such a lovely bunch of people – we have been duly warned by others who have travelled with Intrepid, G-Adventures and Peregrine a lot, that this is not always the case!  Most of them were seriously happy to have been with such a harmonious group too. We had a lovely dinner, shared contact details and there were hugs all around.  It’s weird how you can get to know people so quickly – I’m going to miss my morning hug from Chris.

Anyway, we had some work today do while in Marrakech, and then it was one last foray into the medina for some last-minute shopping. I have to admit that after our madhouse experience here just before New Years, I wasn’t really looking forward to it.  I mean, we were told that town is busy on the weekends, and it would be much quieter when we came back on a Tuesday… but even I hadn’t anticipated this quiet: 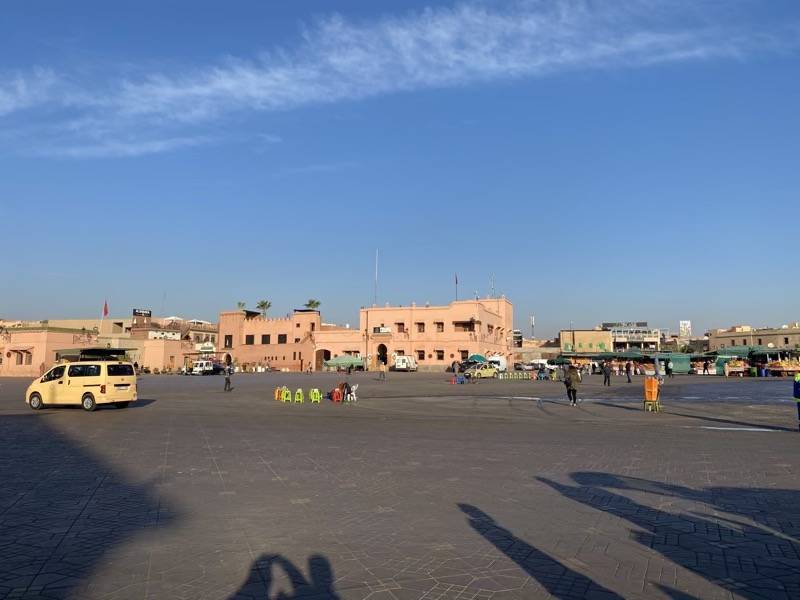 Gone was the soundstage with the makeshift concert venue set up for 40,000 people, gone were most of the snake charmers, monkey handlers, watermen, spruikers, and the heaving tide of humanity that we pushed through when we were here last.  The place was just eeriely quiet.  This is 10am on a Tuesday in Marrakech’s main square!

Even once we dove into the medina, it was predominantly empty!  Which was both great – no crowds of locals and tourist to push through, and also not great – we were the lone target for the few pushy shopkeeps we did encounter. 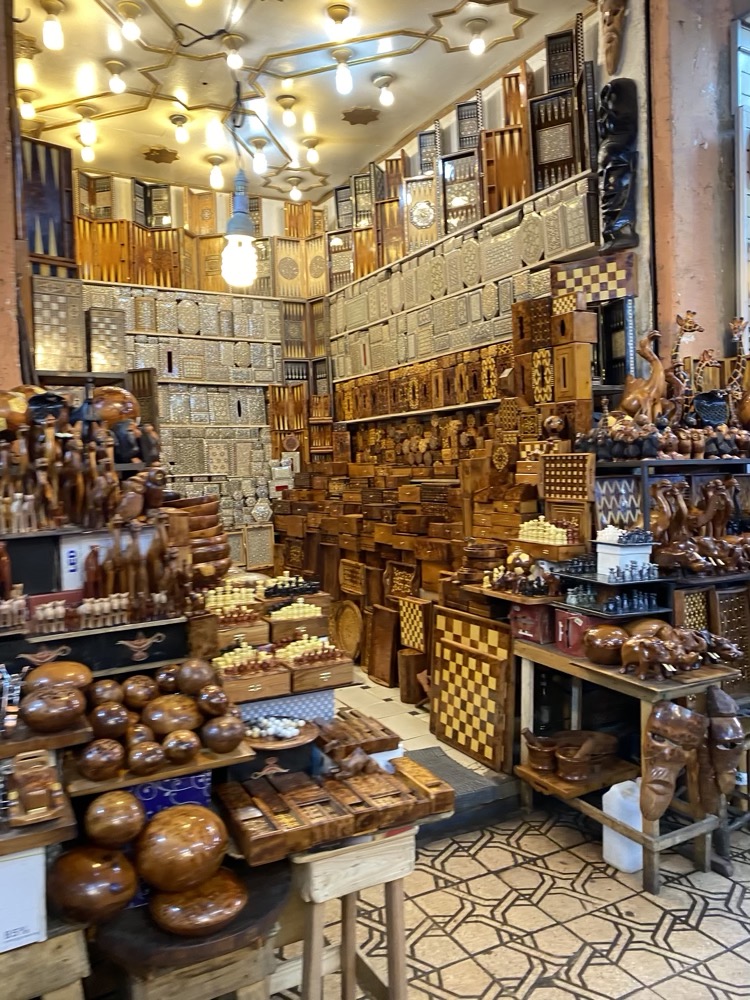 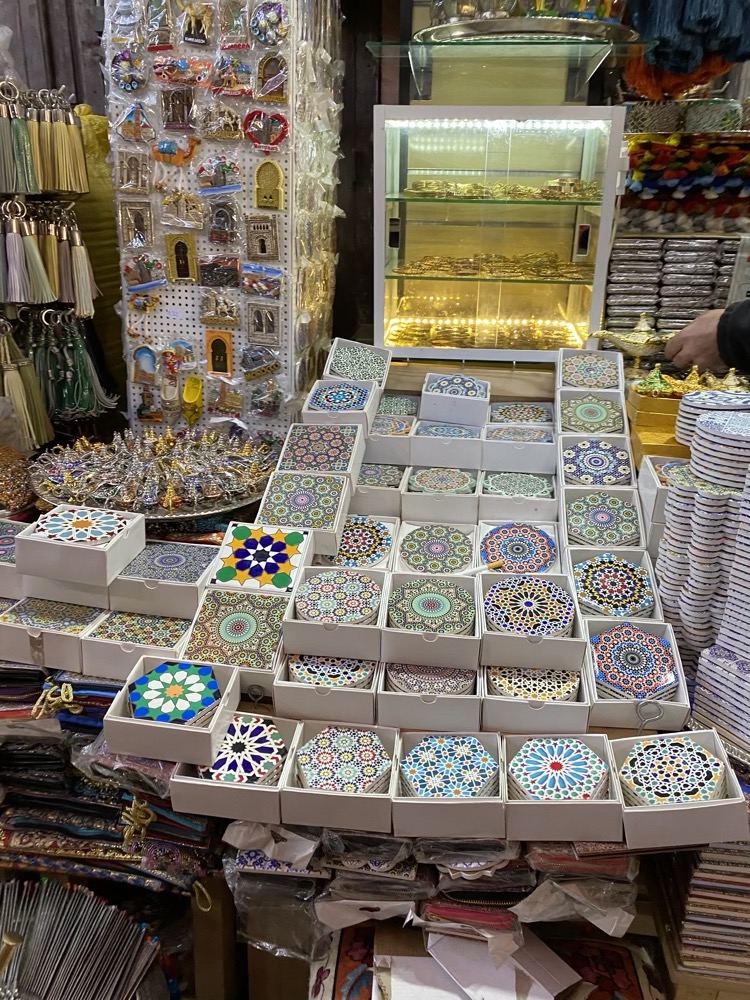 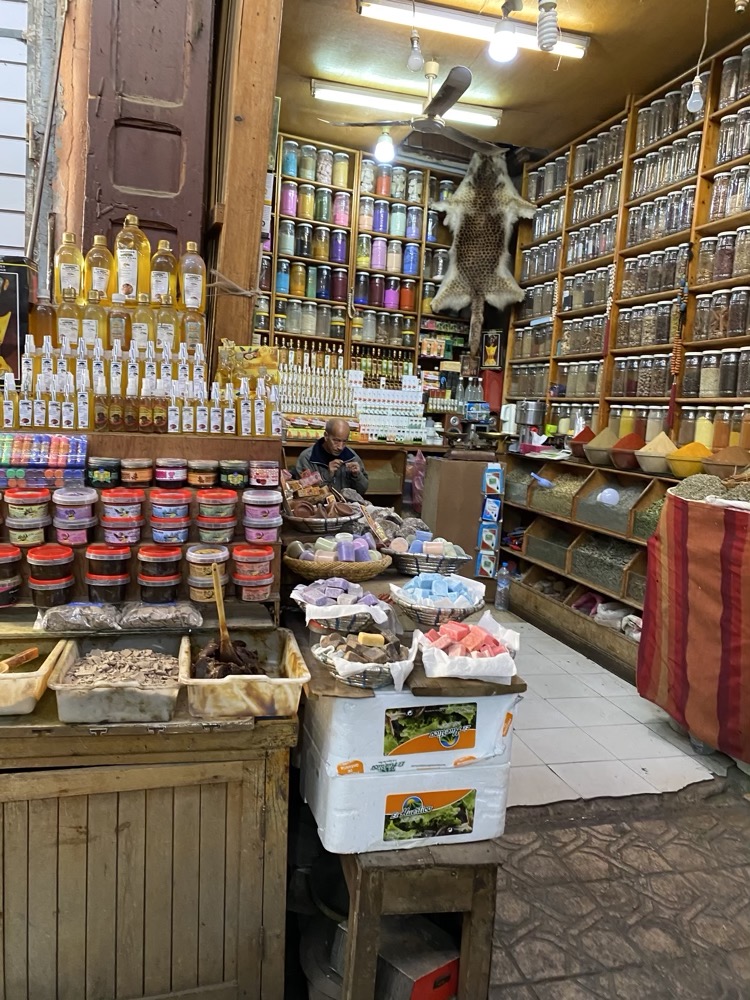 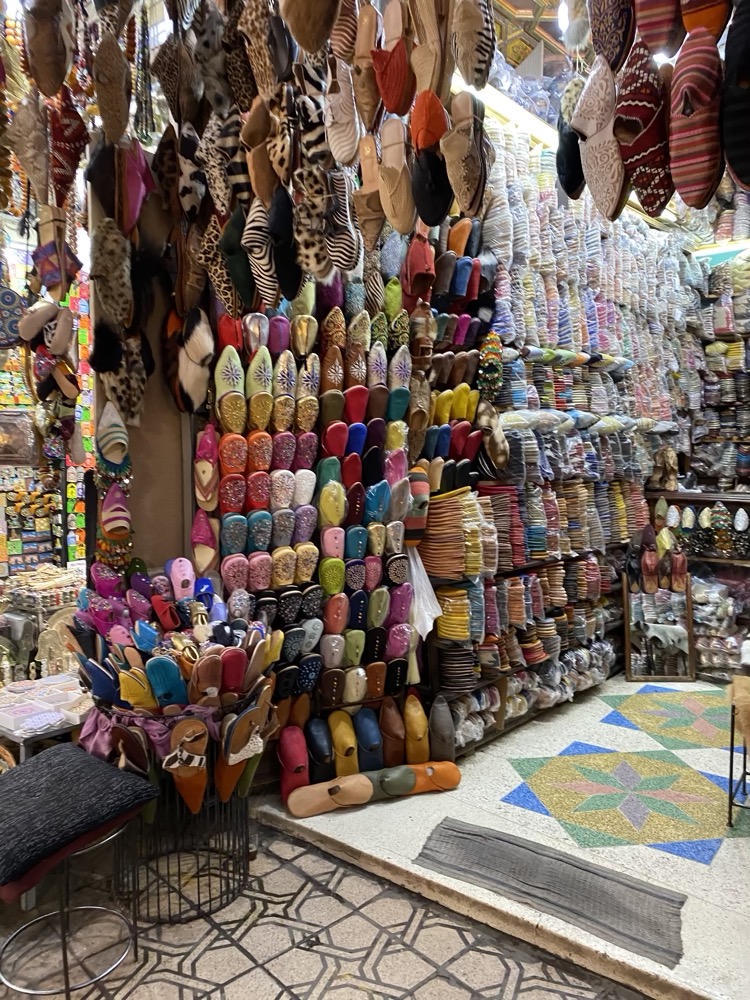 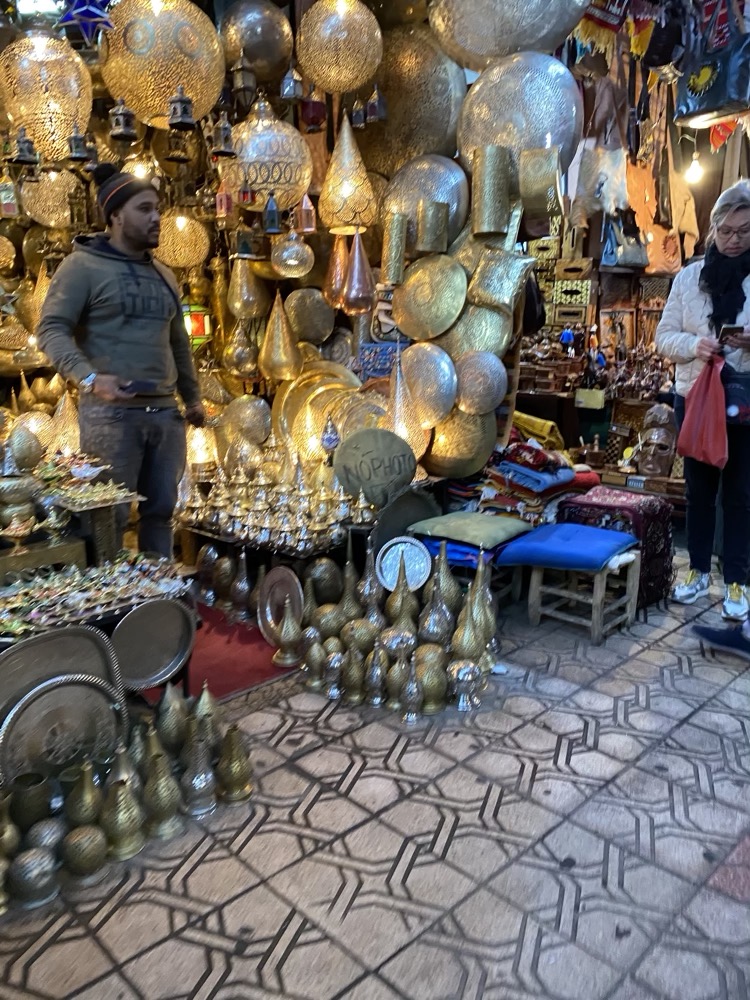 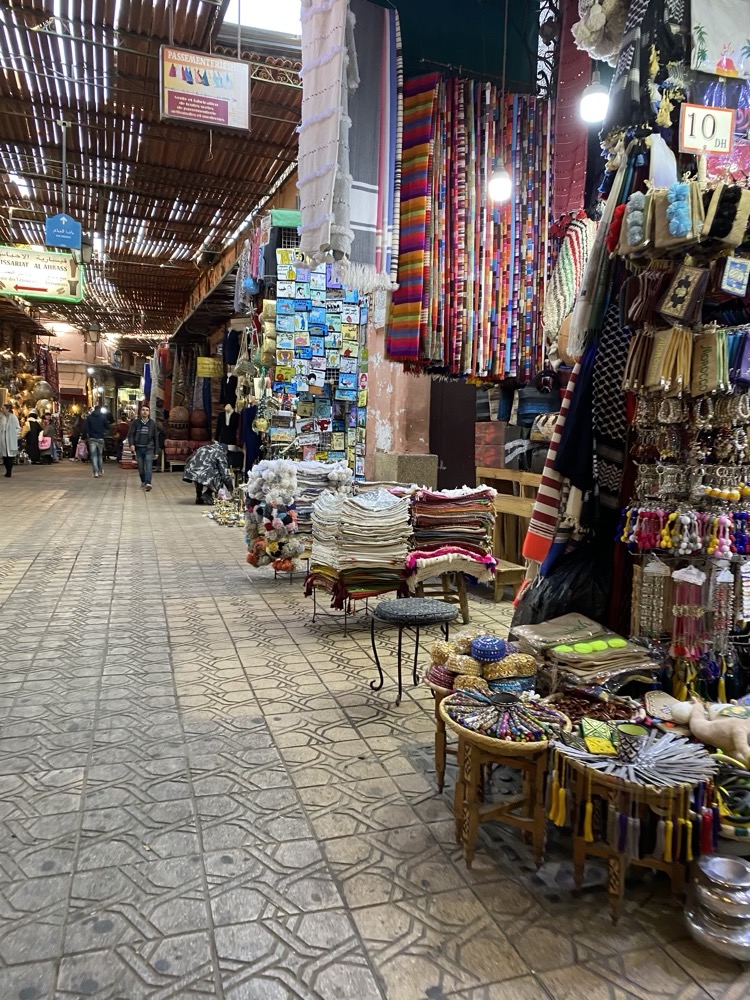 Guess what Dr Nick?  I have made it through three weeks in Morocco surrounded by gorgeous pashmina and haven’t bought a single one!  Not even under the pretence that it’s a gift for someone else… who would have thought such a thing could ever happen!  🙂 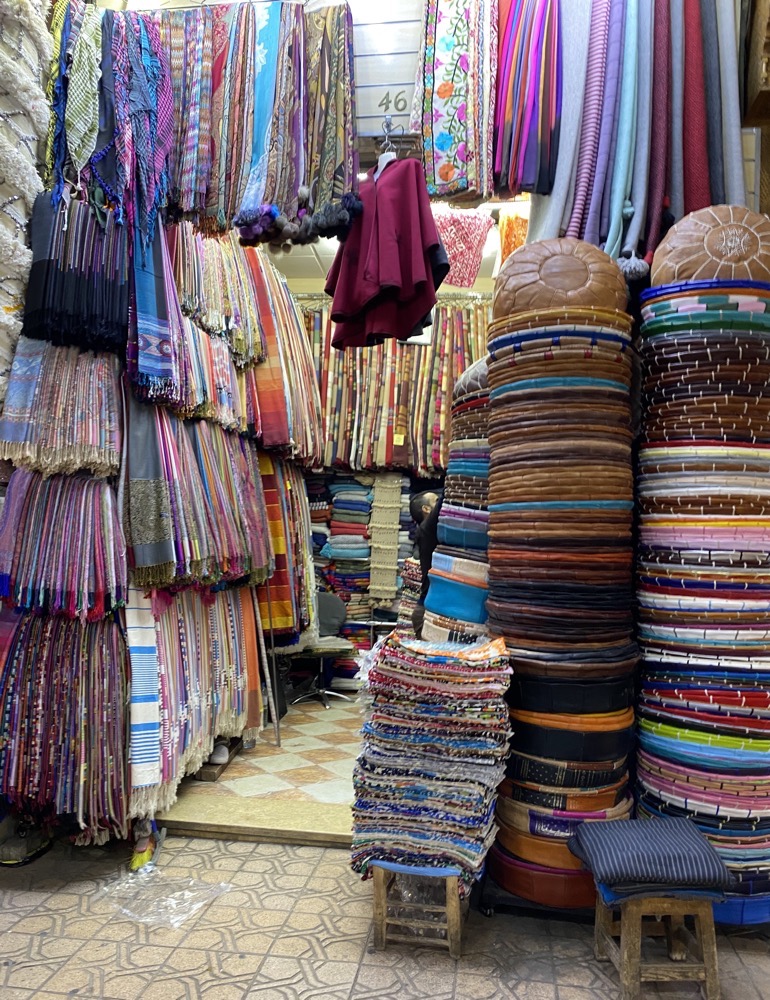 After our rather quiet (and I have to admit, pleasant) trip into the medina, we went to pick up some laundry and do a few errands before it was back to the hotel to play Tetris with the luggage – that’s always my job.  Making it all fit in.  We normally make sure we don’t buy things that need to be declared when coming back into Australia – it always just reeks of too much effort when you’re shattered from the long haul, but the handicrafts here have defeated us and we have several things that need to be declared, so I have carefully packed those for easy access at customs.

Saw this sign and remembered that I have failed to mention that Morocco still has barber-surgeons… you go to the barber for your haircuts, shaves and basic dentistry etc.  Yeah… you first. 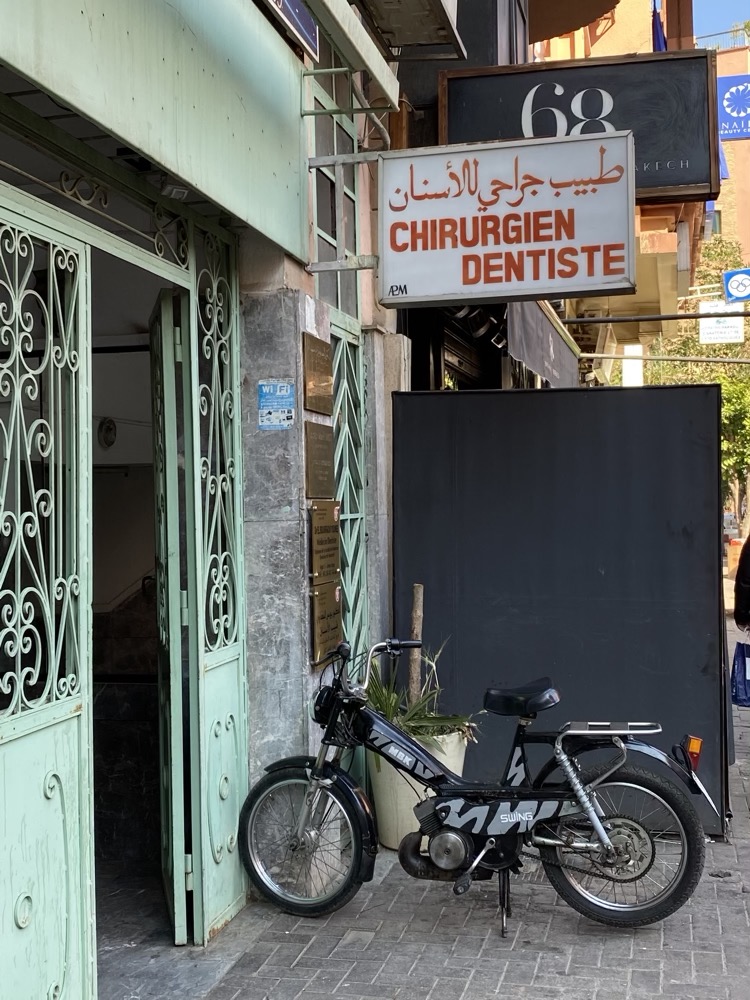 Spent the afternoon getting some work underway and packing.  After that, though, we were too stuffed to go out to hunt and gather for food.  So this is what we ordered from room service at our hotel – a Scillian pizza (with way too much capsicum and missing the requested anchovies), a kefta tagine (which was very tasty) and some Moroccan goats cheese and herb briouats (little filo pastry pies).  It was extremely tasty.

I’ve found a nice looking recipe for a kefta tagine that I’m going to have to try out when I get home.  https://tasteofmaroc.com/moroccan-meatball-tagine-tomato-sauce/ 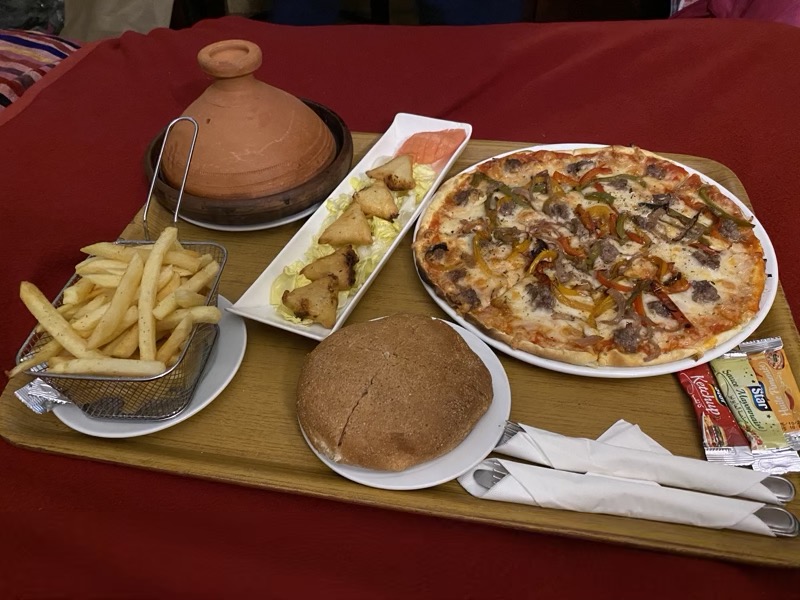