Saguenay (Sag-a-nay) is town only recently created in 2002 when several little municipalities joined together to create one bigger city.  The area was originally settled in the 1840s and on the Saguenay River as a natural trade route for the First National peoples who lived in the area.  Then in the 1600s the French established a colony here that was primarily involved in the fur trade and subsequently lumber and paper pulp industries.  It has more recently become a major tourist destination with it’s proximity to the Saguenay Fjord National Park full of glaciers, dramatic scenery and varied marine life, including four species of whales which live in the area. 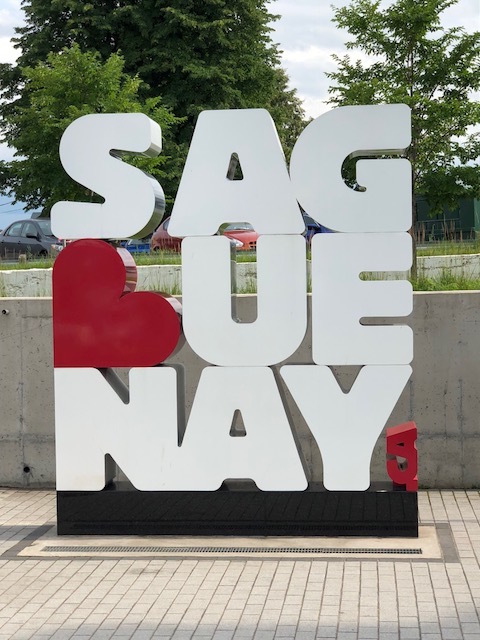 Our ship received a lively welcome to the area by a group of acrobats, jugglers and performers on stilts who were whooping it up and posing for photos on the port. It seems Saguenay is known for it’s hospitable welcome to cruise ship passengers and they make a bit of a festival of it for visitors. 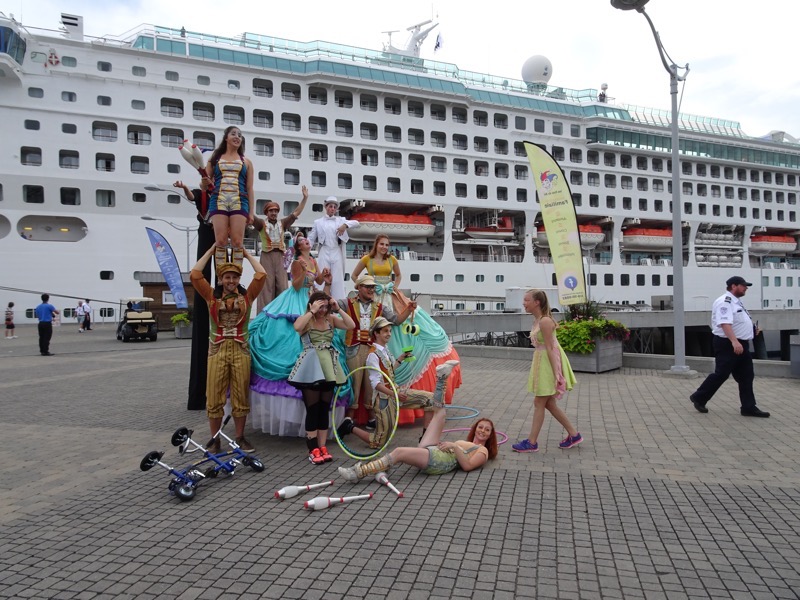 Mermaid statue near the Musee de Fjords on the Baie des Ha ha.  ‘Ha ha’ in this case doesn’t relate something funny but rather means ‘an obstacle’.  The bay freezes over for several months of the year so it becomes quite the challenge to enter or leave the port.  Once the ice is 30cm thick, the locals all set up little ‘streets’ across the entire bay and put down their ice fishing huts, create an ice rink and other entertainments out on the bay.  The whole area can see snow 2-3m deep every winter and yet today while we are here, it is 29C and about 90%+ humidity. 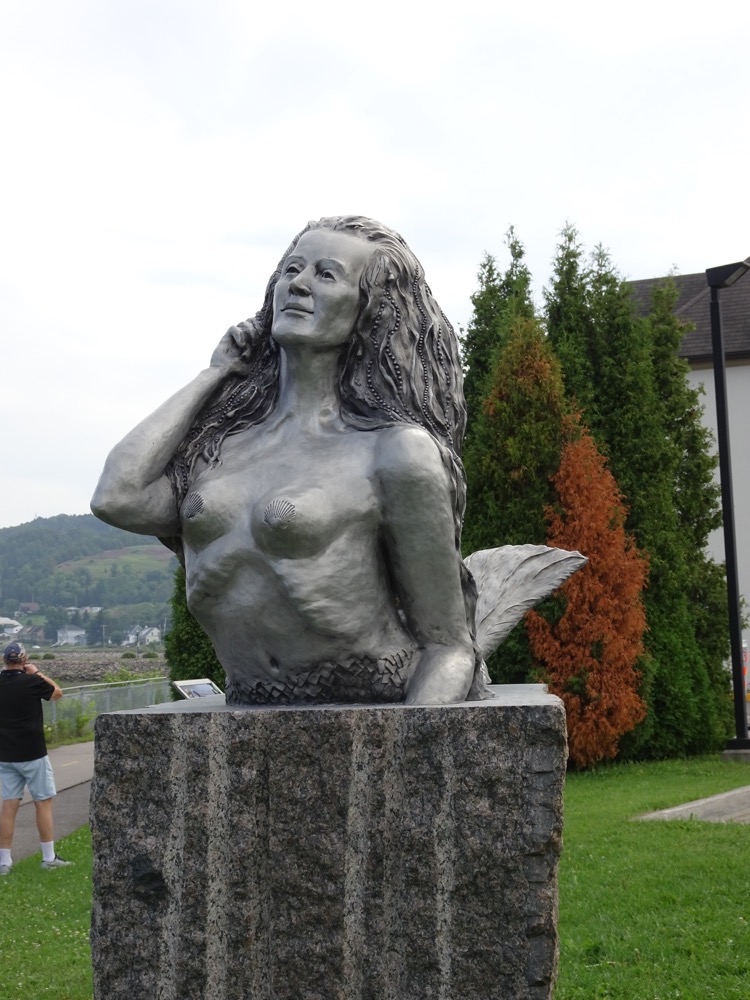 Not far from the Musee de Fjord is the Touverre Glassblowing and Gemstone cutting economuseum.  It is the workshop of a local glass artist, Guiseppe Benedetto who does glassblowing demonstrations and creates plenty of glass art pieces for sale.  Lots of whales, marine animals, some large colourful plates and drinking vessels etc.  We had a quick look through on our way to the Ha-Ha Pyrimide. 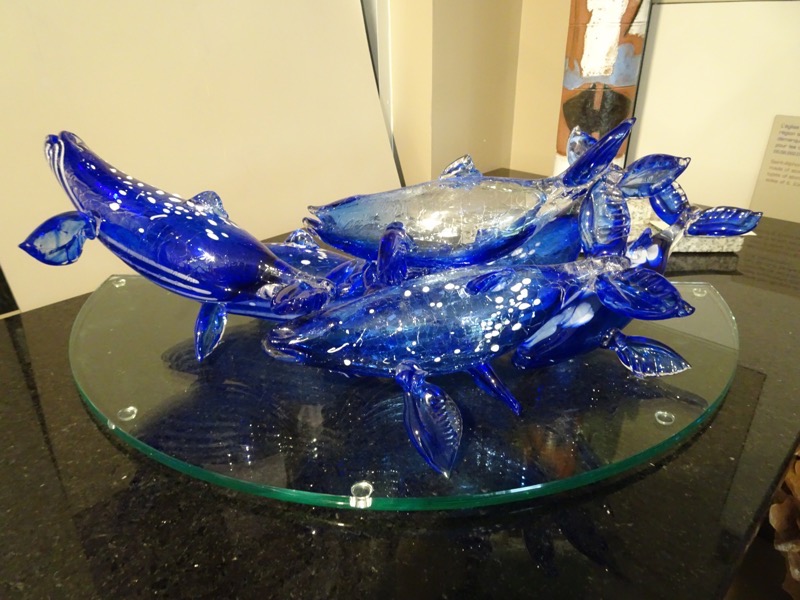 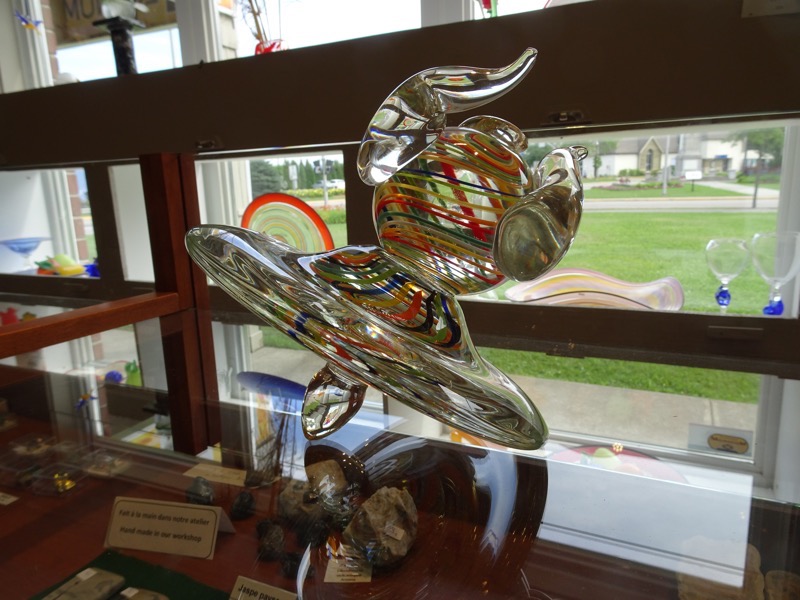 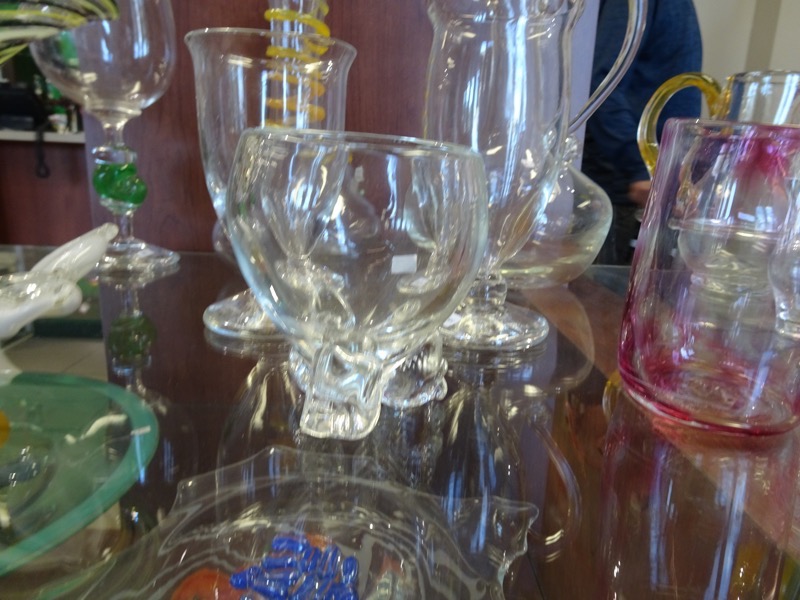 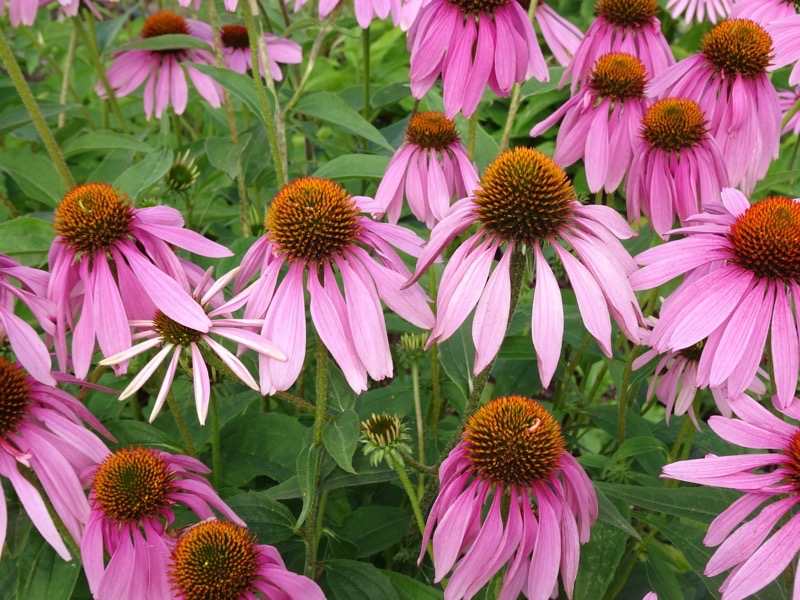 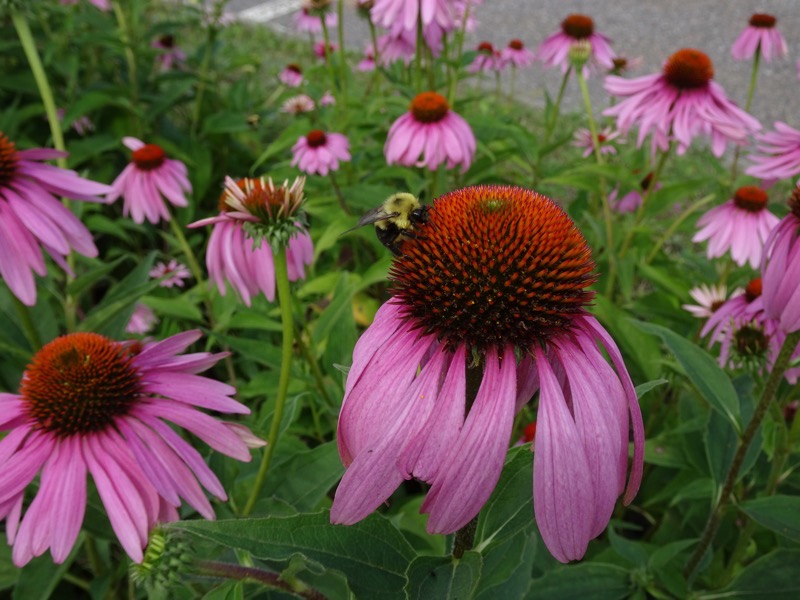 In 1996, a major rain depression event resulted in 260 mm of rain falling over only a 48 hour period across the Saguenay-Lac-Saint-Jean region. The ground was apparently already oversaturated after an unusually rainy few weeks and none of the excessive rainfall could be absorbed by surrounding areas completely overwhelming the Saguenay River basin.  This resulted in a disastrous flood which has been commemorated by this art piece created of over 3000 reflective yield (give way) signs, called the ‘Ha Ha Pyrimide’.  It’s very striking and distinctive, but stands out like dogs balls among all the historic buildings and more traditional monuments in the area. 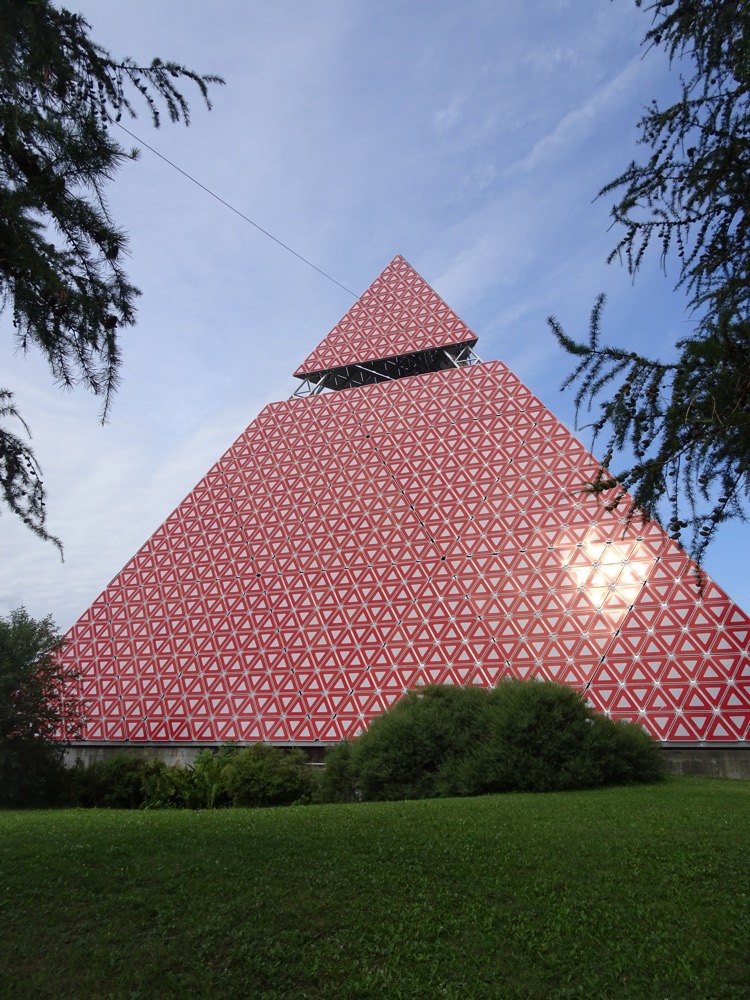 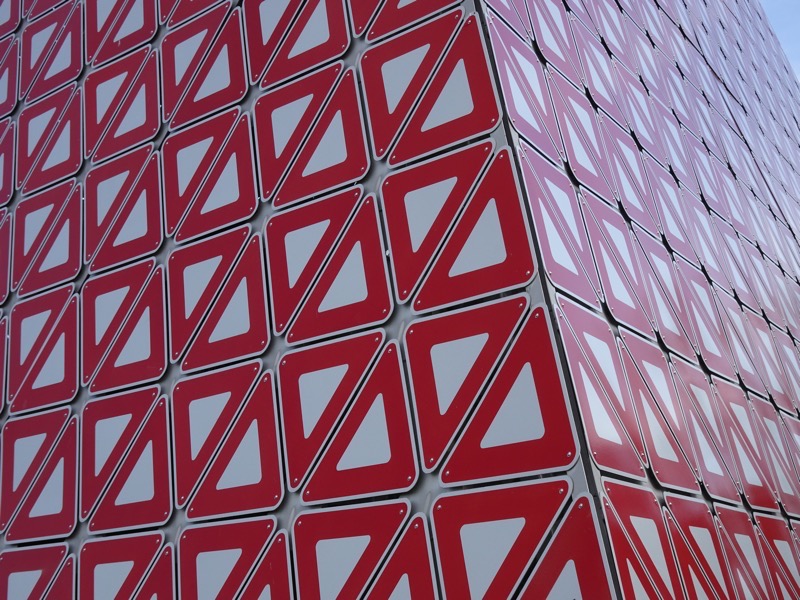 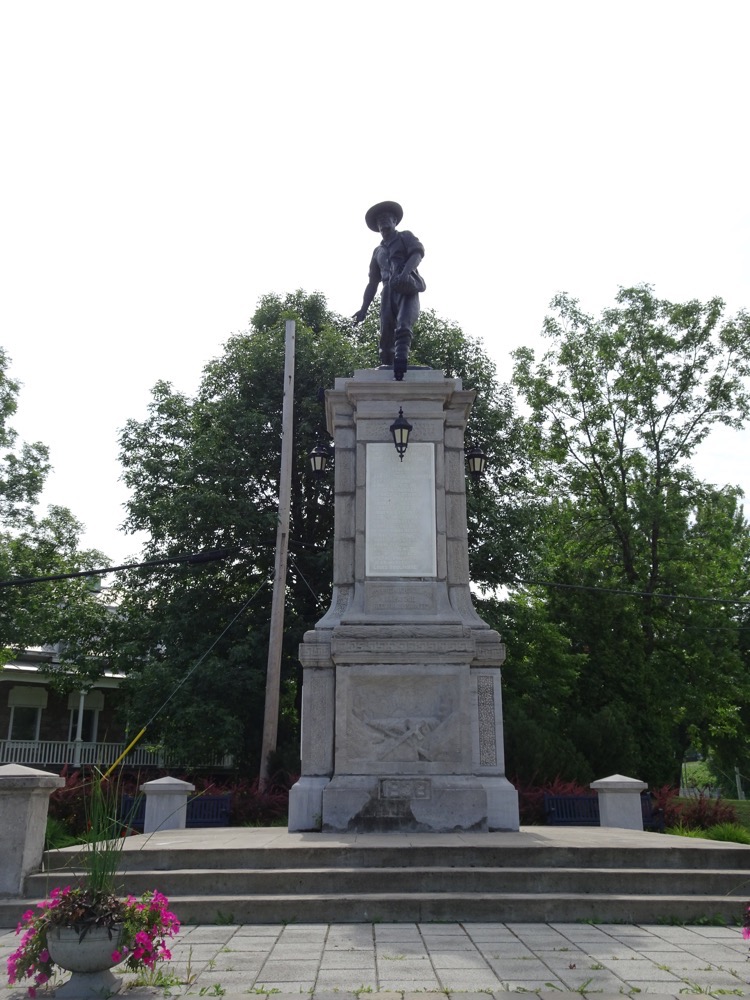 After we left the Baie de Ha-Ha area we headed towards Chicoutimi, another of the seven municipalities that has been rolled into the city now known as Saguenay.  Chicoutimi was once a fur trading post and would later be primarily known as a pulp and paper manufacturing town. 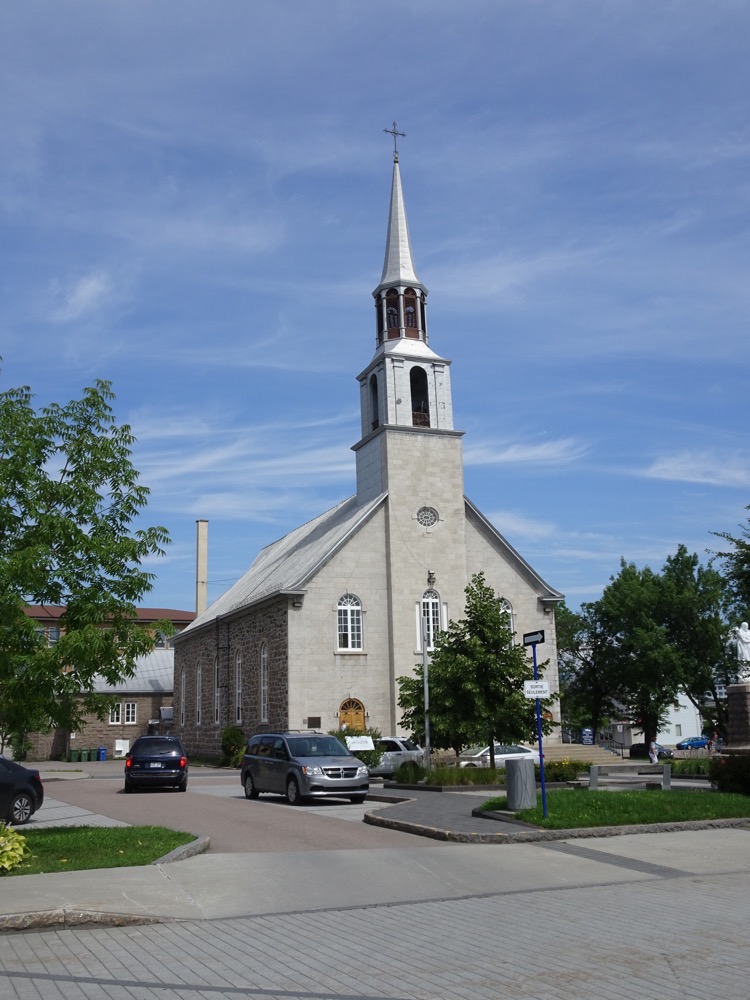 While in town we stopped for some lunch at a nice French bistron called Summum to suck down some free wifi, some delicious Mystique ciders and of course, to try some more poutine!  This serve was completely different to the last one – the fries were maybe a bit overcooked or something, and the curds in lumps so big, they squeaked on your teeth like halloumi 😀 but the gravy was a definite improvement on yesterday.  I guess we will just have to keep hunting. After lunch a little more sight seeing on the way back to the port.

La Petite Maison Blanche (The Little White House), is renowned as the only home to survive when the Chicoutimi River overflowed it’s banks and flooded the region in 1996.  This humble little house is built into the rock and survived the torrential floods, giving hope to the residents as they rebuilt the town.  It has become a symbol of perseverance… completely understandable when you look at the geography of where it stands and the unlikelihood that it would survive. The Chicoutimi River and Spillway Back at the port once again.  Saguenay is a lovely area and surrounded by what we believe are amazingly beautiful national parks.  Being barely 180 miles from Quebec, I definitely think we will be back here one day to do a land tour to see more of the area. Sail away down the Saguenay Fjord, the weather had come in considerably and it was raining quite heavily in patches, but gave a gorgeous impression of the rugged countryside nonetheless.