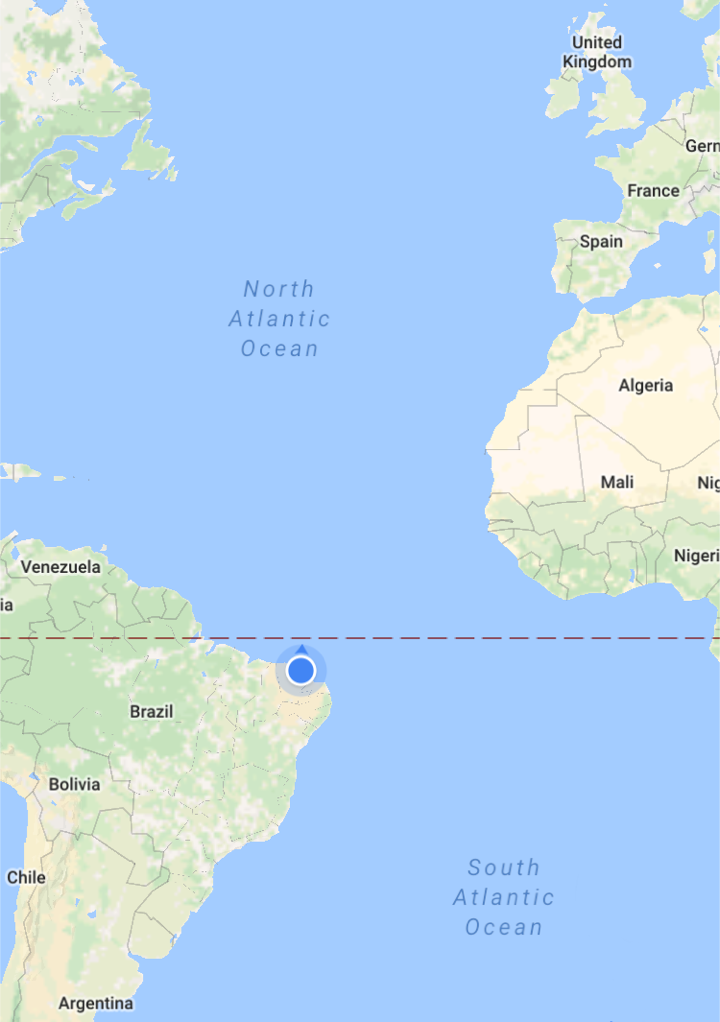 Fortaleza is the capital of the state of Ceara in the northeastern region of Brazil.  We are not fare from the equator here and it is hot and humid. While the actual ‘fort’ was established by the Dutch around the 1650s,the region was already a well established stronghold of the Portuguese empire since 1550s.  It is now the fifth largest city in Brazil with a population of 2.6 million people.   Looking at a map, I had no idea how close this region was to Africa, and Europe… probably something to do with the fact that most maps I’ve grown up with have Australia in the middle and depict Africa to the west and the Americas to the east and you don’t really think about how close the other continents are. 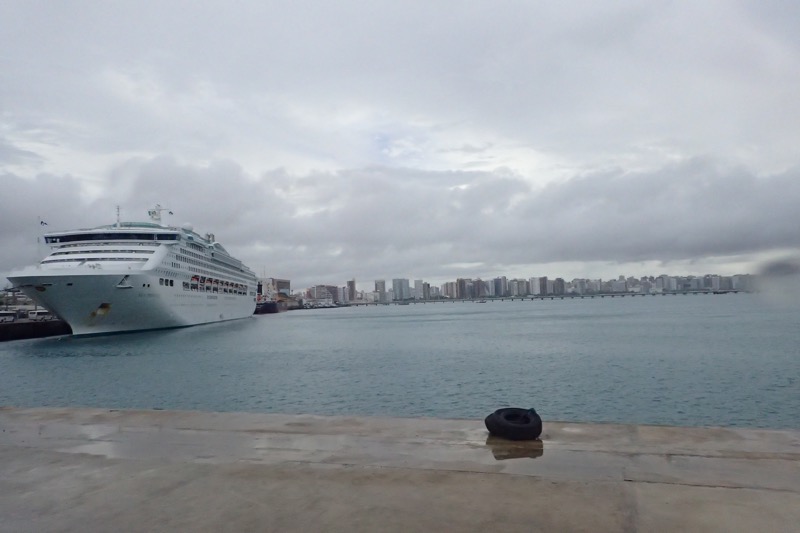 To quote the (rarely) useful port guide that the ship provided for us:

“For centuries, histories have debated the claim that Spanish explorers Vincente Yanez Pinzon was the first to step foot in what is now known as Fortaleza; however, recorded history begins wth the arrival of Portuguese navigator Pedros Alvarez Cabral who arrived in 1500 and formally claimed the area for Portugal.  The Dutch invaded in 1630 and built a fort on the coast but just 15 years later, the Portuguese expelled the Dutch, seized the fort and named it Fortaleza de Nossa Senhora de Assuncao – Fortress of Our Lady of Assumption.”

I have a feeling that is the shortest version of that particular history you’ll ever see.  :/   It continues…

“Fortaleza became an important port and agricultural centre in the 18th century but its fame flourished 200 years later when Brazilians discovered the city’s quaint charm, abundant sunshine and sprawling beaches.  Today, this bustling port is a welcoming haven to travellers from around the world seeking relaxation.” 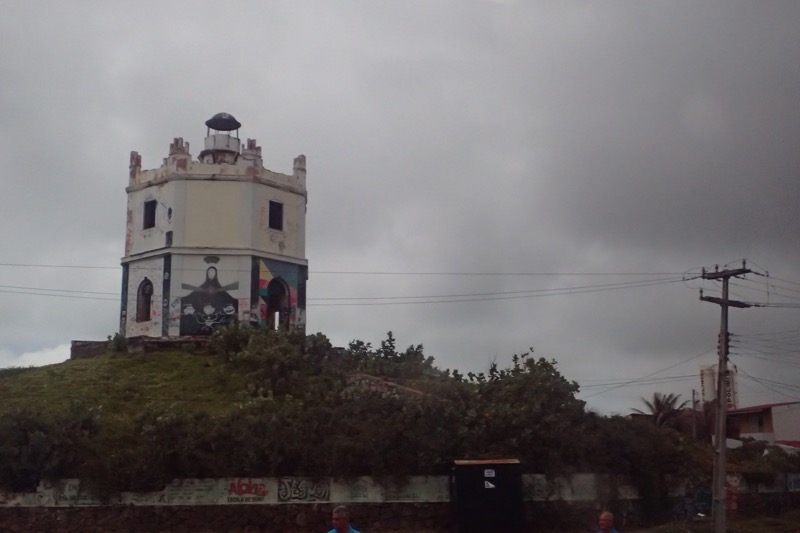 Fortaleza was probably the dirtiest city we have visited so far, with the most obvious evidence of poverty, homelessness and a genuine sense of ‘don’t walk off the tourist routes, this place is not safe’. 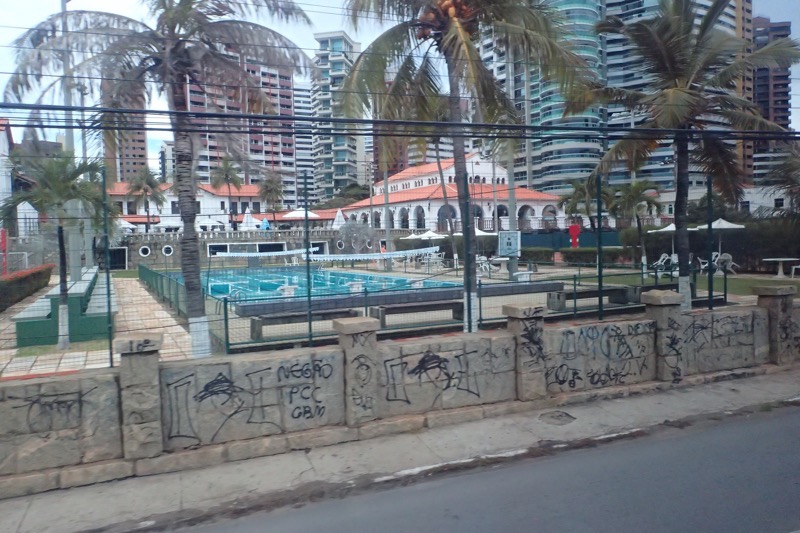 We were on a ship tour today, our first so far this cruise, and unfortunately we were held up nearly an hour late in leaving the ship due to a 3m swell in the HARBOUR.  The ship was swaying back and forth against the dock, meaning the gangway was rolling back and forth making it very difficult for people with mobility issues to navigate.  We know this sort of thing can tends to make the tours a bit rushed, and today was no different – we were given a very glossed overview of Fortaleza.

Never mind, we eventually disembarked, and were met by a large Brazilian guide named Marcello – who had a good command of English, but who also possessed the the most dreadful monotone.  He explained to us repeatedly that there was as significant wealth gap in Brazil, and it was no where more obvious that in Fortaleza.  Apartments on the waterfront were extremely expensive and only available to the very wealthy.  The average income was somewhere around 980 Brazilian Reals PER MONTH.  That is little over USD$300 a month.  To live ‘well enough’, a family needed about 2000 or 3000 Reals income per month, so that means that the bulk of people here, are living below the poverty line.

Our tour took us through an area called ‘Future Beach’, which sounds like it was largely purchased by speculative investors some 30 or 40 years ago, however the future that ‘Future Beach’ promised never came to pass.  No major developments occurred here and the area is largely low set, private dwellings belonging to the lower socio economic demographics of the city. 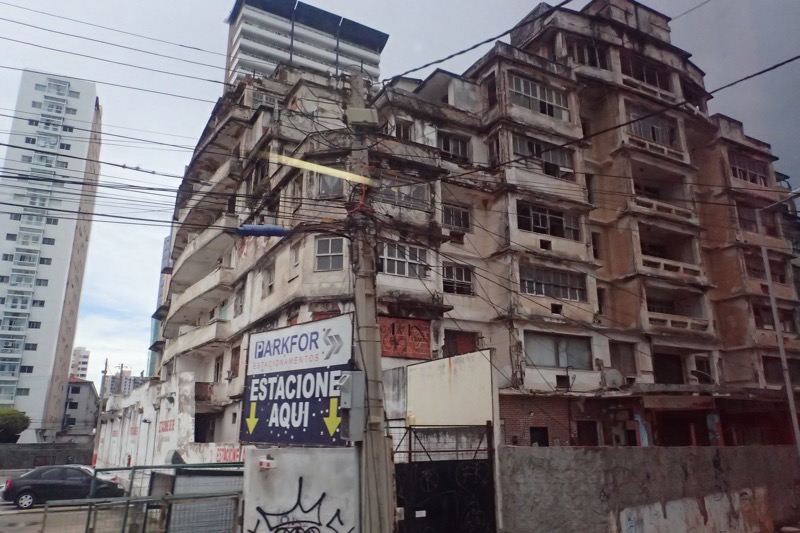 Across the city was the Cathedral Metropolitana de Fortaleza. Built in 1978, it is built in a high gothic style reminiscent of many European cathedrals.  The Cathedral was to be our first stop in the city, unfortunately, due to Carnivale being on, the Cathedral was closed and we were unable to go inside… it is an impressive enough building, but in sore need of some restoration work to clean the stonework. 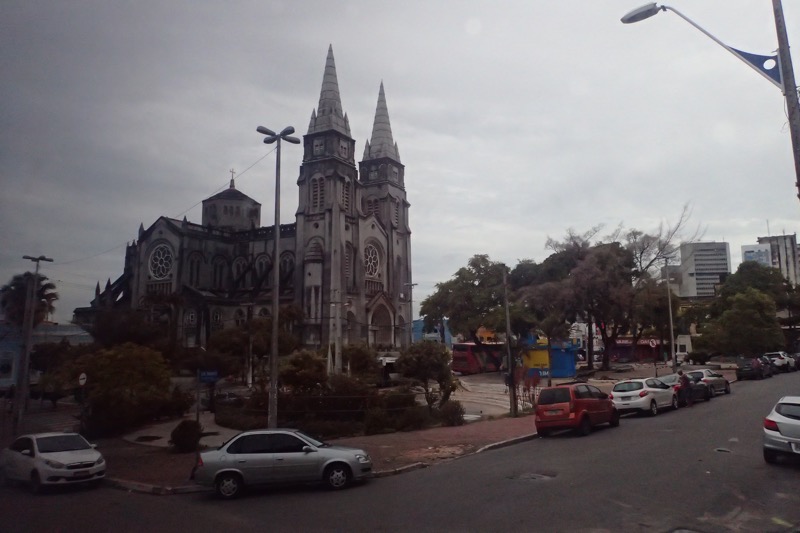 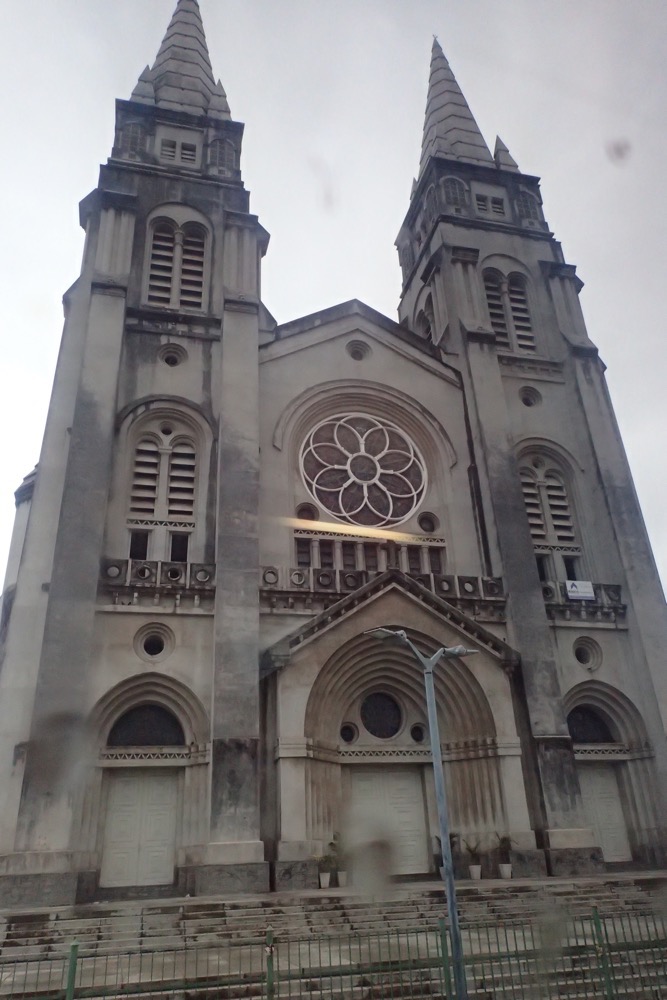 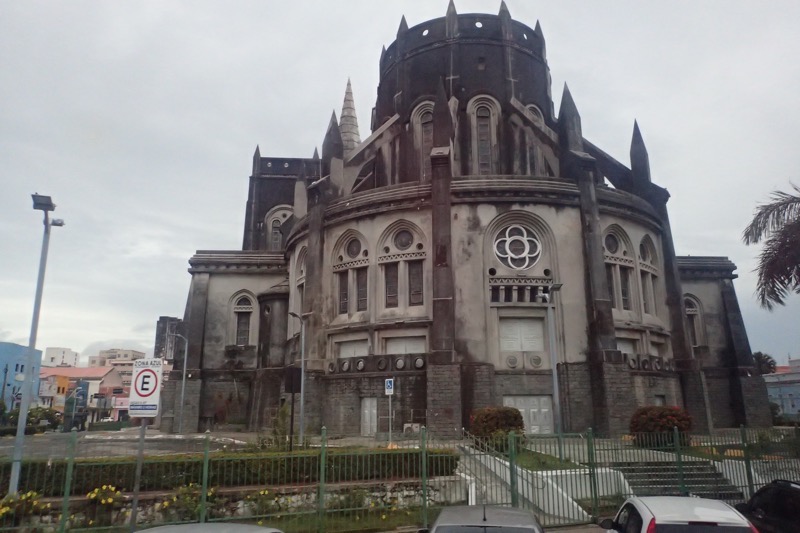 Nearby is the large and chaotic Mercado Centro.  The Central Market is a four storey building crammed with stalls of people selling local handicrafts – lacework, leatherwork, carved timber, souvenirs and exotic tropical fruits and local food.  We wandered around the market for about 45mins… it was hot, humid, packed with tourists (foreign and domestic), and so noisy.  Aunty Mary found a nice top, but other than that we didn’t hang around. 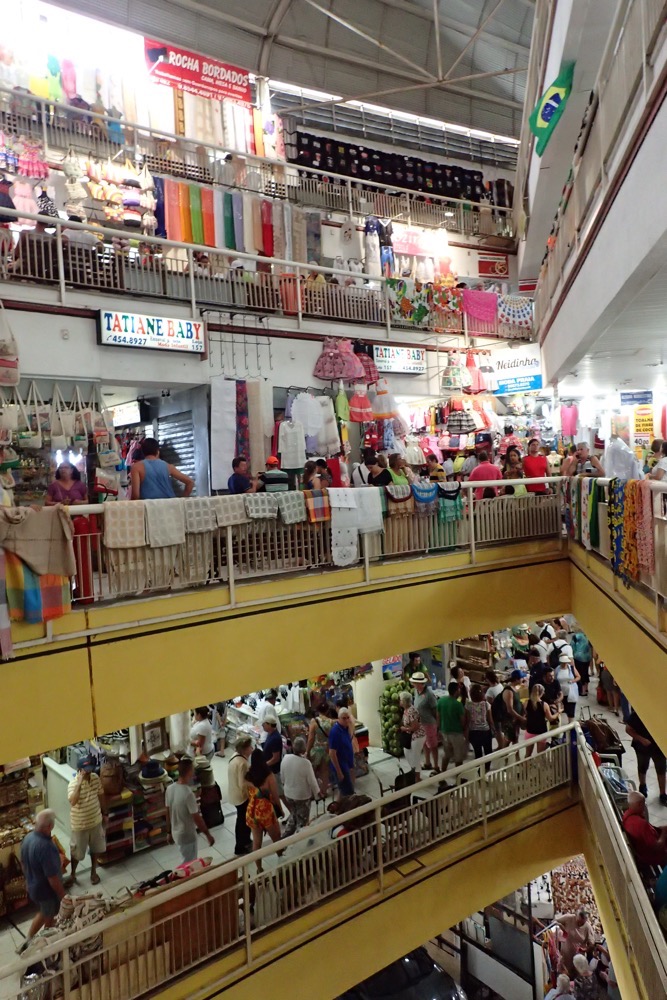 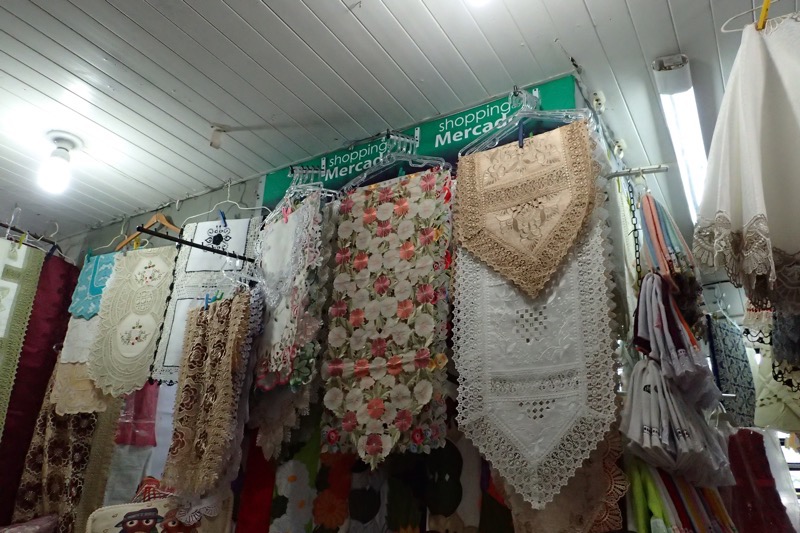 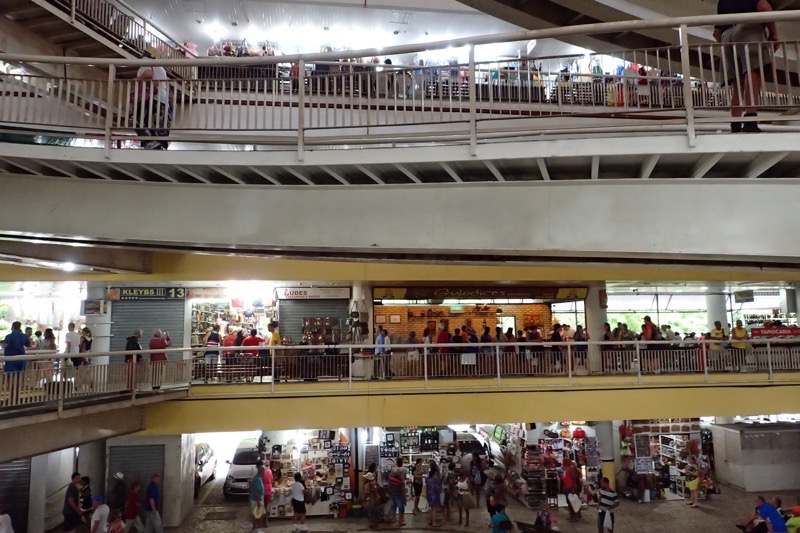 After the Markets, we went to the famous Theatro Jose de Alencar.  This particular famous theatre is a three story Art Nouveau style theatre with an intimate space for 800 patrons.  It has an interesting front foyer building with a salon that seats 120, and a courtyard between the foyer and the theatre.  It is a lovely little theatre and I imagine there is not a bad seat in the house.  The theatre was opened in 1896 and has a lovely garden space attached, and for some reason it is important to note that the steel in the ironwork came from Glasgow in Scotland?! (though I have no idea why on that last bit).

The Theatro is lovely, but it’s seriously at risk… a place like this should be air conditioned for temperature and humidity control – the timber and the ironwork are well looked after, but the frescoes are receiving too much light and the humidity are going to eventually destroy them.

Drove past the old prison – right in the centre of the city. After this we went down to Fortaleza Beach Front.  Fortaleza has many sea breaks built far out into the ocean to preserve their beach areas.  Leaving large expanses of sandy beaches perfect for recreating on.  The beaches were nice… though being on a ship tour, we did not really have any time to enjoy them. 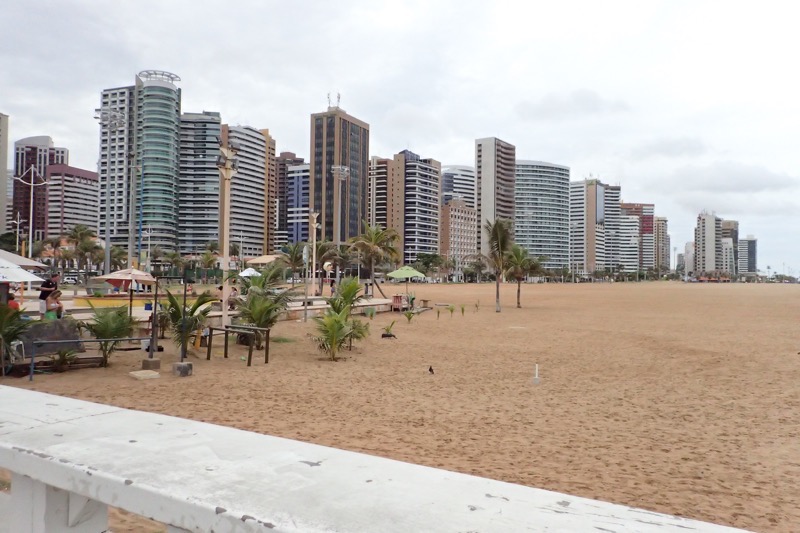 This could be quite a nice play to holiday… and it is apparently very popular with domestic tourists, as well as foreign ones. And after this we drove on back to the ship via a famous shopping district that was also all shut up for Carnivale .  It was a bit of a flat day out really.  Fortaleza probably has many beauties, but with the Cathedral and most of the town all shut – some white sand beaches are not really going to pique the interest of a bunch of Aussies.

The main shopping street… over 500 retail stores, mostly fashion, shoes etc.  None of it open.  Felt like a ghost town. I have a feeling that Fortaleza could be a lovely place to visit – lots of cultural offerings, lots of seaside restaurants, but as a day trip destination, and in the middle of Carnivale when everything from the shops, to the museums to the cultural centre is all closed up.  Probably not.  Sorry Fortaleza, but you’re not one of my favourite ports on this trip… perhaps I’ll return one day and gain a more favourable impression.