It’s now Monday, and I’ve finally resigned myself, that I am feeling as good as I am going to get regarding our tour to Iguazu Falls on Friday.  So I thought I had better write something and post some photos before we move onto Rio tomorrow.  Getting to the Fsalls involved being picked up from the port by a local driver (NB: not a tour guide) to take us to the airport, and flying from Buenos Aires to Iguazu.  Then being met by our actual guide, and going to the Iguazu Falls National Park in the Argentine province of Misiones which borders the Brazilian state of Parana.  As anyone who has read my previous post is already aware, this was (on this occasion) far easier said then done!

We ended up arriving at Iguazu about 4:30pm giving us limited time in the park itself.  The upside of this late afternoon visit, is that there were not many people there; the late afternoon sun also made for good photography conditions.  The downside of a late afternoon visit is that we did not have a lot of time to spend exploring the area, and were only able to walk around the lower falls circuit track. 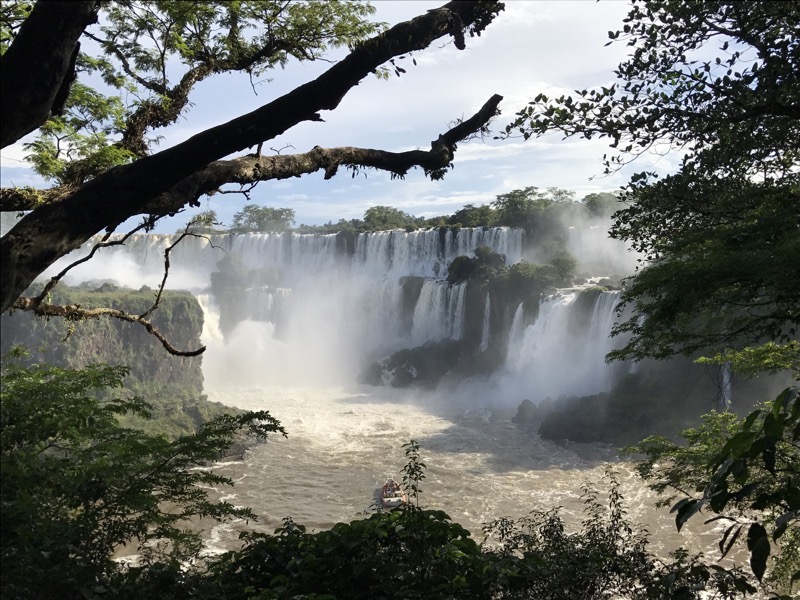 Diego, our guide, informed us that the name ‘Iguazu’ comes from the Guarani or Tupi (local indigenous peoples) words for ‘y’ meaning ‘water’, and ‘uasu’ meaning ‘big’.  So they are literally called ‘Big Water Falls’. 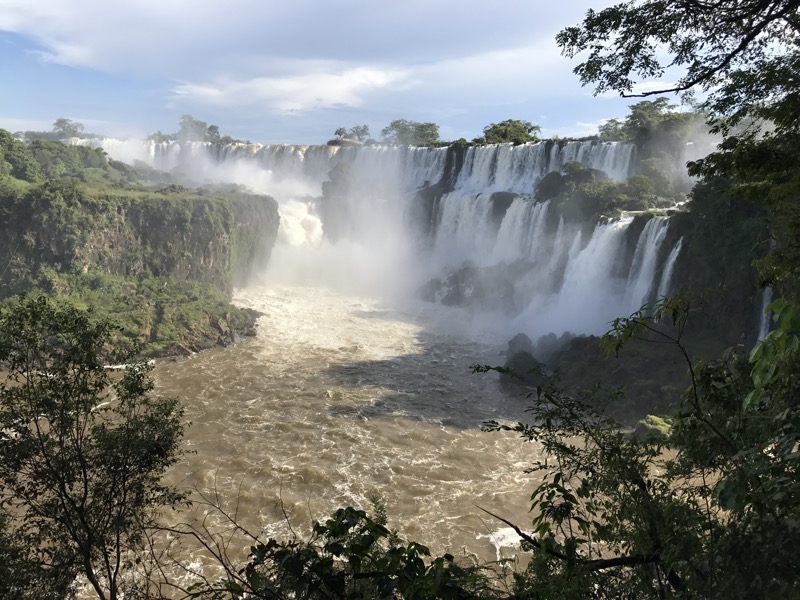 According to local legend, a god planned to marry a beautiful woman (they’re always beautiful, yeah?), who jilted him for her human lover, and in a canoe they attempted to escape down the Iguazu River.  In a fit of rage, the god destroyed the river, creating the waterfalls and condemning the lovers to falling in the water for all eternity… or something like that.

There are 275 separate waterfalls within the cataract area, with drops between 60 and 80 meters, with the highest drop being 82 metres (that’s 269 feet in the old money). The falls run right along the border between Brazil and Argentina, which crosses through the Devil’s Throat – the widest and most impressive section of the falls.  On the right bank is Brazilian territory and on the left side is Argentina.  Approximately 80% of the falls are on the Argentine side of the border. 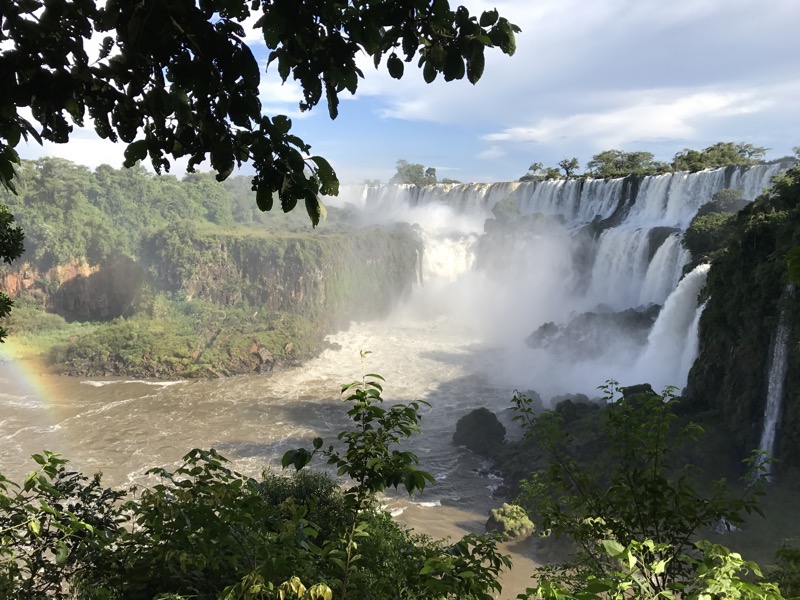 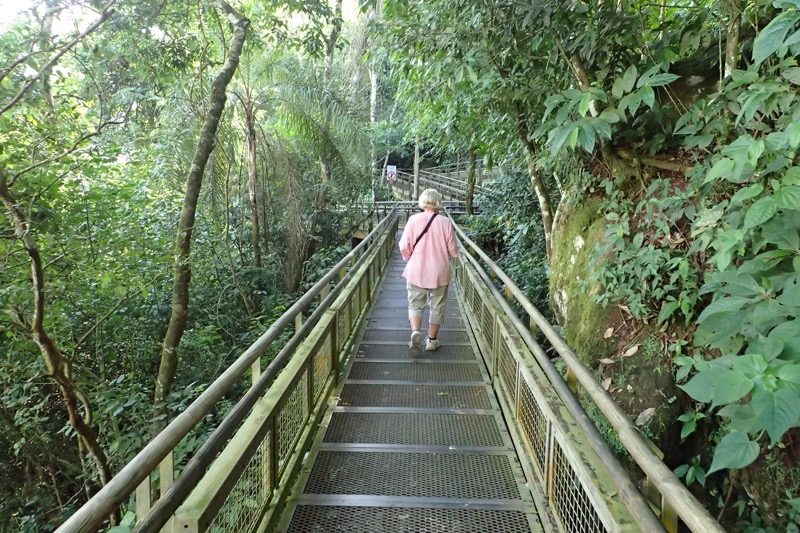 The falls were very impressive, but to me, walking through the rainforest overlooking this wonder of the natural world, just did not feel worth it at all. I felt as though I was forcing myself to smile and participate, and I couldn’t not stop thinking about the people in our group who were left behind. I just felt awful all afternoon.  I wished I had not come and that someone more able to shake off the incident had come in my place. Anyway, we are ‘trying not to talk about the war’, three days later, and so far; success = minimal. 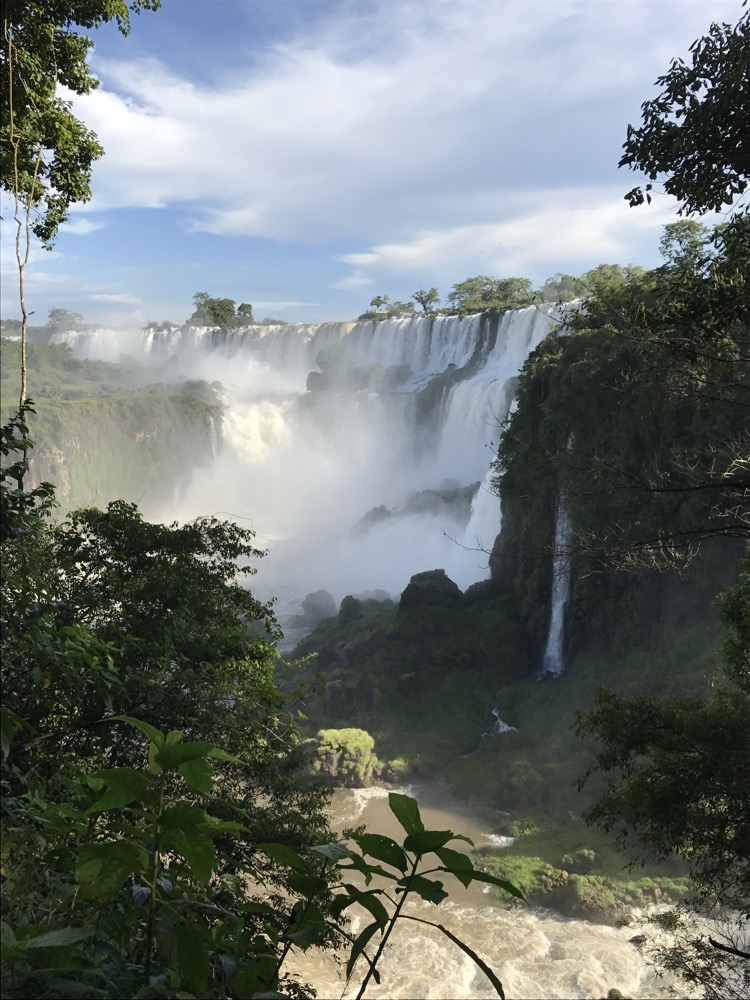 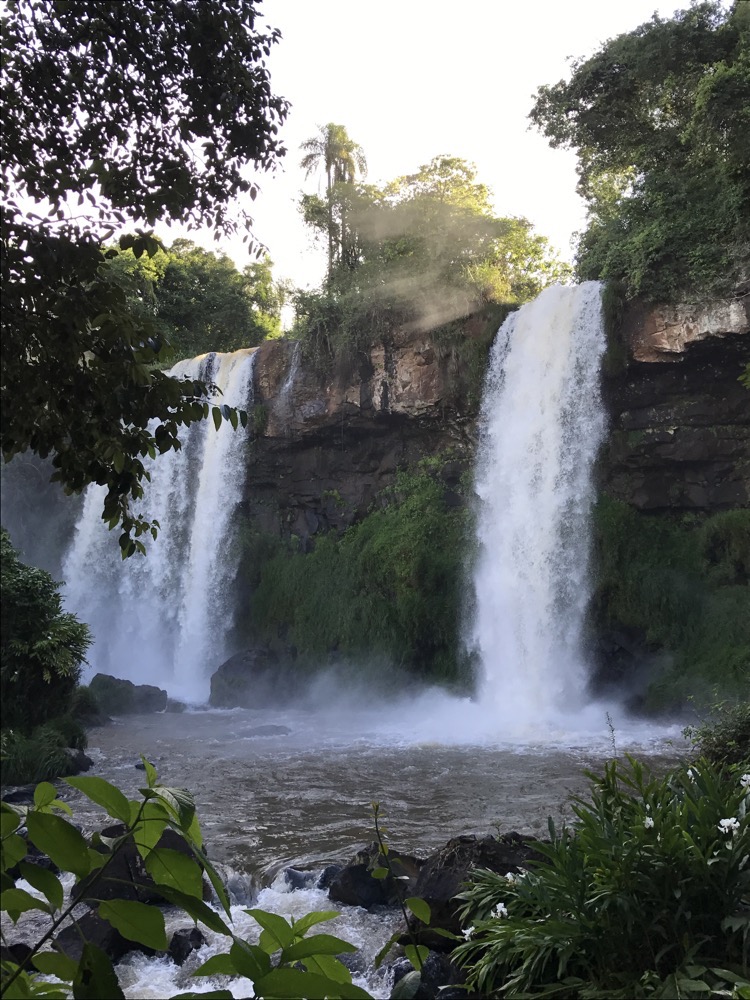 On another note, we saw wild toucans in the rainforest and it was the first time this trip that I cursed leaving my heavy and cumbersome DSLR with its L series lenses, at home. Most of the tours we had done involved either vast sweeping Patagonia vistas or getting up close to the wildlife, so I hadn’t really missed it until that moment. After we saw the falls, we went to check into our hotel, got cleaned up a bit and then went to a place called ‘The Landmark’.  The Landmark is a local hang out place where you could sit and drink mate, enjoy the company of neighbours and watch the sunset.  This beautiful look out point allows you to see the convergence of rivers that marked the boundaries between three different countries – Paraguay (on the left), Brazil (on the right) and Argentina, which was where we were standing.  It is a very unique spot. 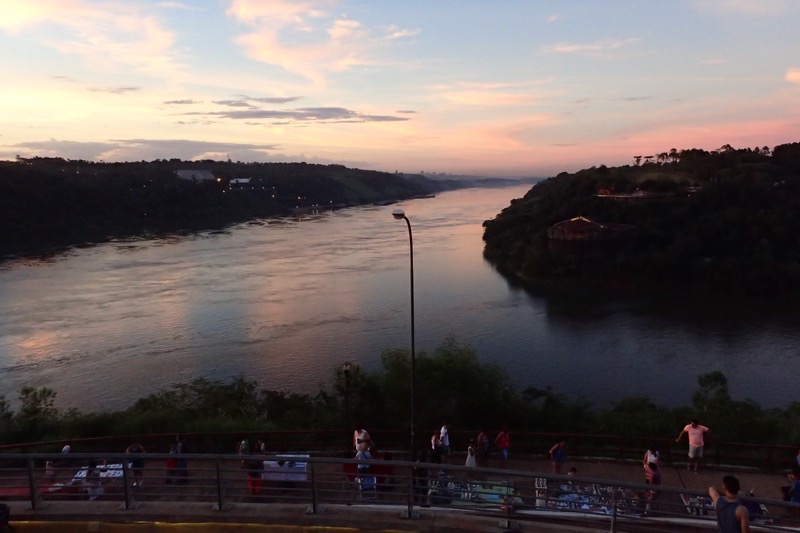 Following our stop at The Landmark, we collectively opted to go to a very touristy local Argentinian Barbecue restaurant, called El Quincho del Toi querido, for dinner – complete with noisy folk music and later, a tango show.  The food was plentiful and quite nice (in spite of it being tourist prices, and there being lots of offal in the BBQ), but there was plenty of wine and thank god for that. 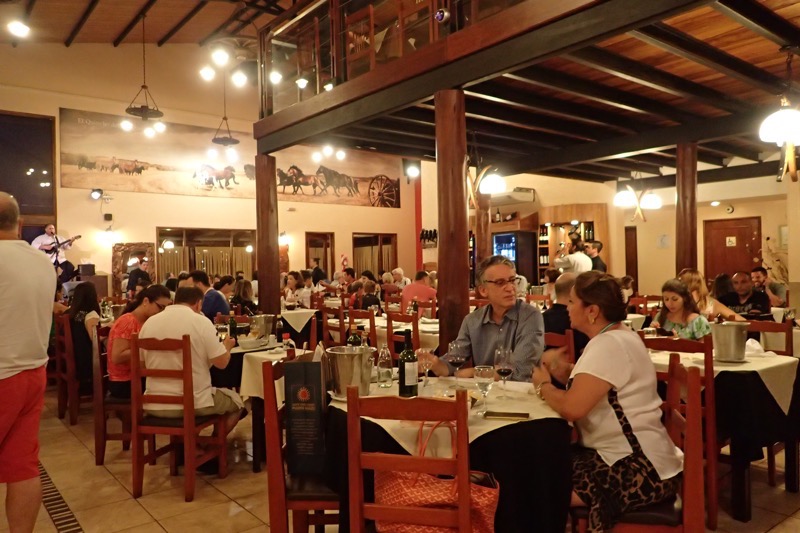 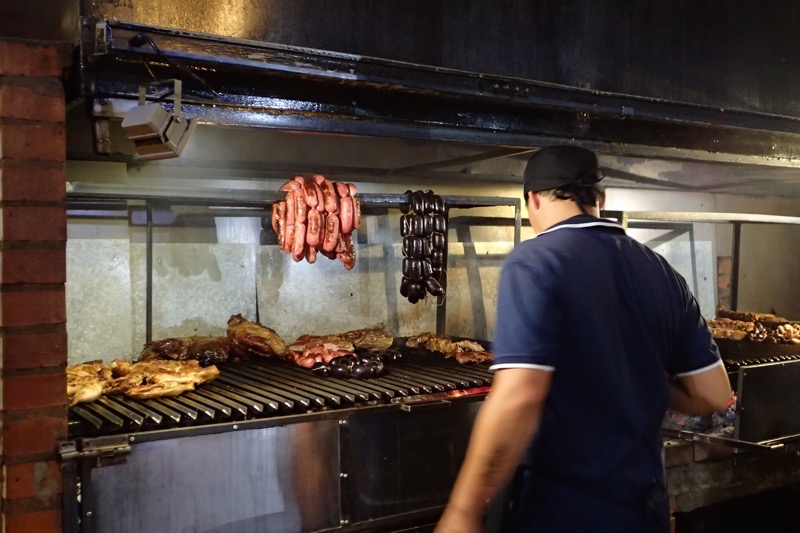 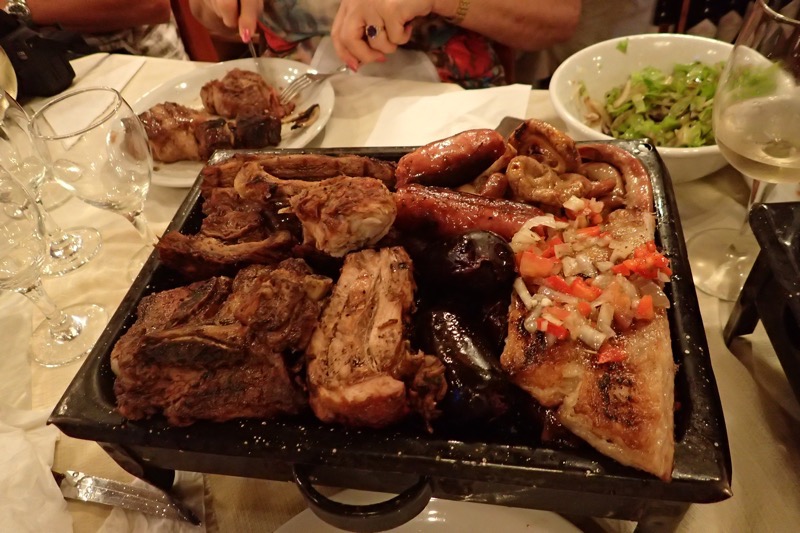 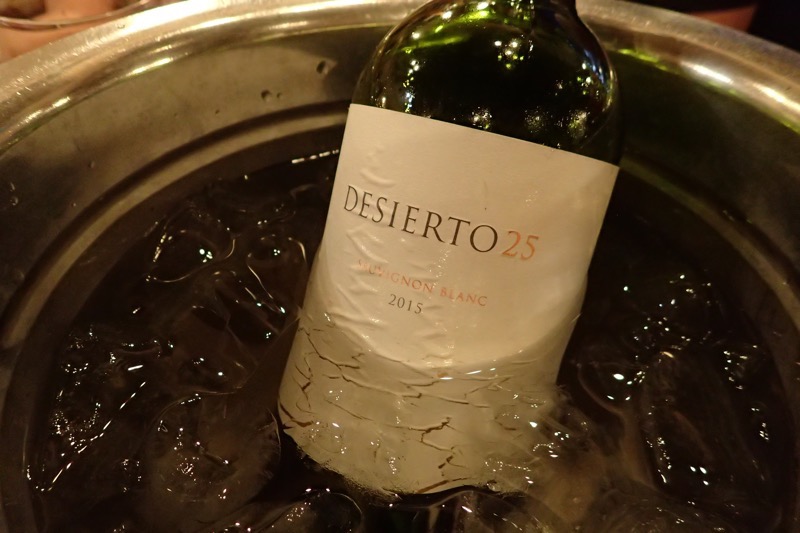 I eventually stopped feeling like I was going to be ill, at about 8pm… which is probably around the same time as we were polishing off our second bottle of wine.  I picked up a spare bottle of sauvignon blanc on the way out to have back at the hotel, which Aunty Mary and I knocked off sitting by the pool watching the stars.

This tour should have been one of those memorable lifetime occasions, but it had turned into a just downright god awful day, and even the beautiful waterfalls did not recover it for me.  I doubt I will ever look back on today and be glad I came. I’m still trying to just shake it off, but it is proving particularly difficult with everyone on the ship still talk about it, and with total strangers asking me if I am okay.  :/

Diego giving me a supportive hug at the airport… Landscape from the plane…