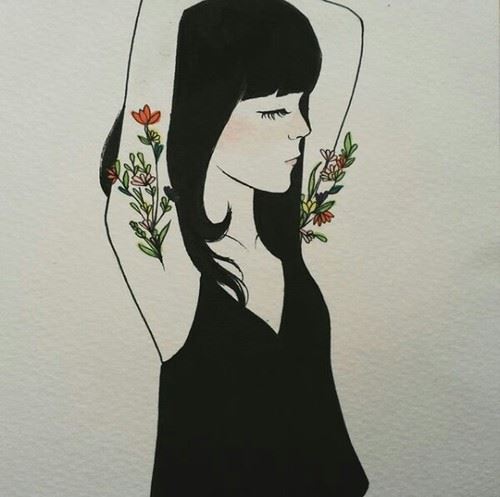 When I was 5, I sat on the edge of my chair with my legs spread. I felt an itch between them, so I reached down to scratch, but my grandma grabbed my wrist to stop me and hissed: “Girls don’t do that!” I asked her why, because I had seen my father doing it, I had seen all the boys in primary school doing it, too. And it itched and I wanted to scratch it. Her answer was: “It’s just how it is. Girlsdon’t do that. Also, don’t sit there with your legs spread like that. Girls don’t do that, either.”

When I was 6, I spent a day on the beach with my family. I was excited about the new bikini my mum got me, but confused as to why she asked me to keep the top on when I went for a swim. She hadn’t made me wear it the years before, but suddenly, she was very fussy about it. “Look, I’ve got one on, too.”, she said to me. And I thought I understood: Women had to cover their breasts, because they were bigger than mens’. But I wasn’t a woman. I was a child. Later, I overheard a talk she had with my dad. “I don’t want old men to stare at her.”, she whispered. I interrupted them and asked her why she thought old men would look at me. Her answer was: “It’s just how it is. It’s because you’re a girl. And men do that.”

When I was 9, I got in a fight with my best friend. I went home and complained about it to my grandma, who lived with us. She told me I should have seen it coming. “That’s how girls are.”, she said. “A friendship between girls is always also a competition. Girls are jealous, manipulative and backstabbing. You can’t trust them.” But I had never fought with my best friend before and I knew we’d forgive and forget the next day, anyway. So, I asked my grandma why, and her answer was: “It’s just how it is. Catfights will happen. It’s normal. That’s how girls are.”

When I was 13, I fell in love with a boy from the neighbourhood. I couldn’t hide my excitement. He was on my mind all the time and I caught myself wishing we were together, so I could hold his hand and kiss him, too. I wanted to meet him, get to know him better, and I told my dad about my plan of asking him out. “Don’t do that.”, my dad said. “It’s not appropriate for a girl to ask a boy out.” Though I partly agreed, since I had never seen a woman proposing to the man in a movie, or read about a girl kissing her crush first, I still didn’t understand what would be so bad about being an exception, so I asked my dad why I had to wait for a boy to show interest in me in order to be allowed to openly requite it. His answer was: “It’s just how it is, darling. The man makes the first move. It’s always been this way. Boys like to conquer, and girls love being chased.”

When I was 17, I was part of a large group of friends. There was a boy who fancied me. I didn’t like him back, but I wasn’t used to anyone crushing on me, so I enjoyed the attention. He’d always tell me I was special. One of a kind. Different. “You’re not like other girls.”, he said. “You’re not a bitch. You’re funny, laid back, intelligent. You don’t just care about your nails or your hair. You get my sense of humour. You’re not like most girls. You’re my best guy friend. But with tits.” I was flattered in the beginning, but soon, I started to wonder if his compliments were any at all. I began to feel disgusted with him. I didn’t want to be his best guy friend with tits. So I asked him what’s so good about a girl like me, a girl unlike what he called a typical one, and his answer was: “That’s easy to explain. A pretty model type of girl is good enough to jack off to, but in the end, a guy wants some drama free pussy. You’re an exception. The majority of girls is superficial and slutty. The kind of girl you fuck, but dump when you’re ready to settle down. Or they’re just plain boring and prude. This sounds harsh, but it’s just how it is.”

When I was 19, there was a boy I regularly had sex with. It was nice. Not the breathtaking kind of passionate, ecstatic fucking I had dreamed of; maybe we lacked chemistry, maybe it would have been nicer if we had been in love; but I was alright with it. I adapted, obeyed and swallowed. Of course I did. In the beginning, he really put an effort in giving me what I gave him. He really tried. But his attempts at putting his tongue to good work quickly faded into halfheartedly rubbing me dry and at some point, he said: “I’m giving up.” I asked him why. His answer was: “It’s so hard to get a girl off. You women need ages to cum. It’s so exhausting.” I laughed and told him I needed about two minutes when I did it on my own. “Then stick to that.”, he said. “I’ve got a cramp in my wrist. Women are so complicated. It’s just how it is. I’m sorry.”

Why can’t I sit with my legs spread? What’s so shameful about what I keep between them? Why must I cover my breasts? Why am I being sexualized long before I’m even told when sex is? Why am I being taught to mistrust other girls? Why do I have to compete with other girls? Why am I only a good girl when I’m not like most girls? Why do I have to keep quiet about the way I feel? Why am I not allowed to show affection like men do? Can’t I conquer a boy’s heart, too? Why must love be about conquering, anyway? What if I don’t like being chased? What if it scares me? Why do boys scare me, anyway? Why do you make me feel inferior to them? And why do I have to like a boy in order to be liked? Why am I being shamed for being a “slut”, them shamed for being “prude”? Why am I expected to adapt, obey and swallow without praise when boys who return the favour are considered grateful, dedicated lovers, heroes, almost ,because to the majority of them, it’s not fucking understood that if I make them cum, they should make me cum, too? Why am I exhausting to be with? Why am I complicated?

I’ve asked them. And they said yes.

“It” is that context, is a never ending circle of resigning acceptance of the circumstance that girls are being raised to disrespect their own gender from their childhood on. I was, and am, expected to accept the fact that being female automatically makes me inferior, and that I should be thankful for being treated equally, because that’s not the standard. I was, and am, expected to appreciate and take it as a compliment when people tell me that I’m not like other women. Because I was, and am, expected to look down on women even though I am a woman myself. But I refuse. I refuse to adapt, obey and swallow. I refuse to accept that “it’s just how it is”. I refuse to take this as an answer, and I will not stop asking why. I won’t ever stop asking why. Not because I want people to give me a proper response, but because I want them to question themselves, too. I want them to start wondering. Want them to start doubting the concept of the role I’ve learned to stick to before I knew how to spell my “typically female” name. I want them to think about it, lose their sleep about it, until they ask, too: “Why?”

In order to eliminate misogynic stereotypes, we must unlearn to understand them. We must refuse to accept “It’s just how it is” as an answer, until we forget what “it” stands for. Keep asking why, until nobody knows an answer anymore. “It’s just how it is” is not an answer. Neither is “It’s cause you’re a girl”. Or “That’s how girls are”. Because girls can be everything and anything they want to be. That’s how it really is.

—Mia Morgan, I REFUSE! A rant on how my female identity has been shaped by excuses and lies.