Woke up this morning feeling tired and exhausted (a combination of too many port days in a row and sleeping on NotMyBed), and with an 8 hour organised tour ahead of us that was meeting at 7:30am  :/  I am so not a morning person anymore.  The weather looked beautiful, if a bit hot – 34C and 35% humidity – and I was looking forward to seeing how much had changed since I was last here in 1995.

We debarked the ship around 8am and hit the road from the port in Piraeus, heading straight for the Acropolis – in the vague hope of beating both the crowds and the heat.  We managed to beat the crowds pretty effectively – but the heat?  Well, that just proved inescapable today.  The Acropolis and the Parthenon are one of the most spectacular monuments of ancient civilisation, so of course I came here on my last visit to Greece, and I remember very strongly what struck me most about the city on that trip… it wasn’t the ancient monuments, it wasn’t the incredibly detailed and interesting history, it wasn’t the famous hospitality of Greeks – it was the god damn smog!  Athens was so horridly polluted back then, that the entire city looked like it was covered in a greasy brown unpleasantness, that came with an equally queasy awareness that you were breathing that shit in! 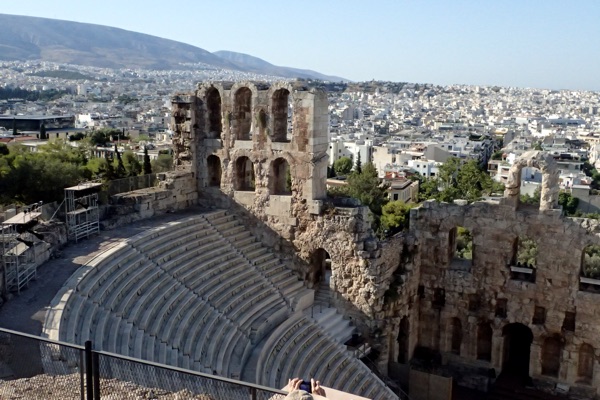 The amphitheatre – designed to hold approximately 45,000 people, the Acropolis amphitheatre is very impressive and with it’s restored and reconstructed seating, it is a popular place for modern concerts still. 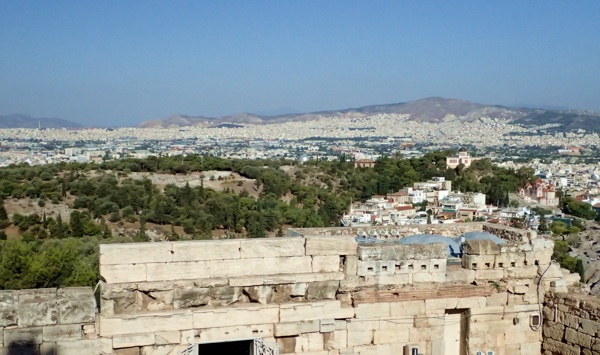 Look at that view – no smog at all… clear all the way to the port and the mountains in the other direction.  I was seriously impressed at what a pretty city Athens is now.  And all the buildings so low – no high rises.  I think part of me expected it would have gone the way of many other large cities and be dotted with ridiculous 50 storey buildings, but the average building height is 4 to 6 storeys only. 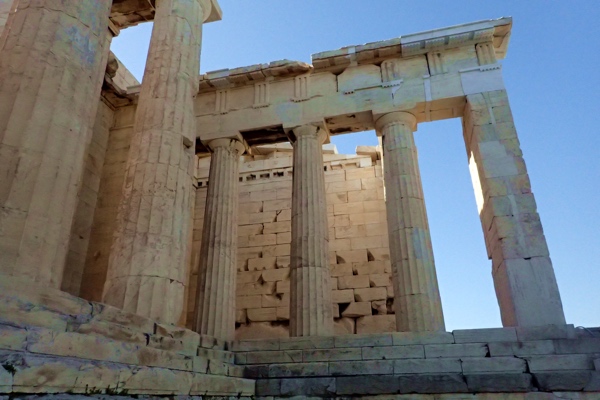 After climbing 80 steep and slippery marble steps, you reach the main west entrance gates, called the Propylaea, to the right of that is the Temple of Nike – goddess of Victory. 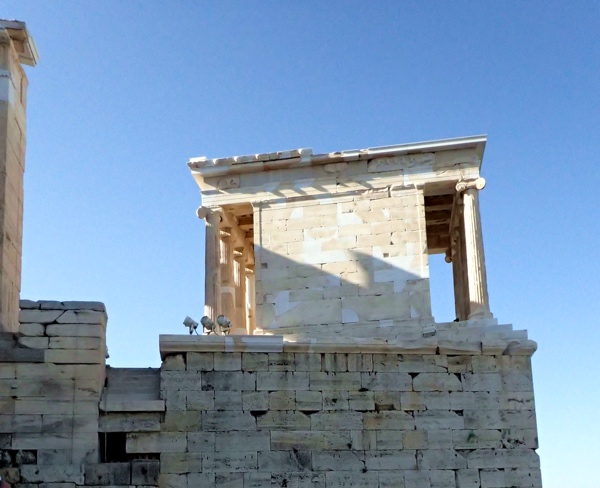 Of course, we climb to the top and find the west face of the Parthenon under scaffolding, and it is the nature of touring these ancient sites that the restoration process is never ending, so while it is always disappointing to see the scaffolds, it is good to know that they are preserving these monuments for future generations. 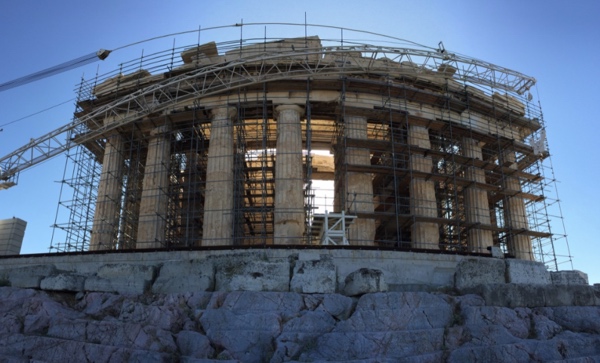 But were very pleased to see that conservationists are obviously doing things one end at a time and the east face looks splendid. 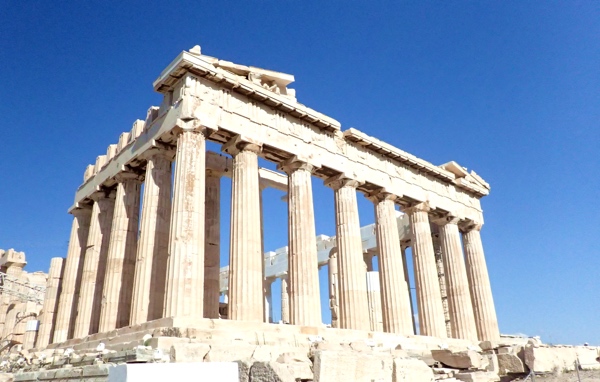 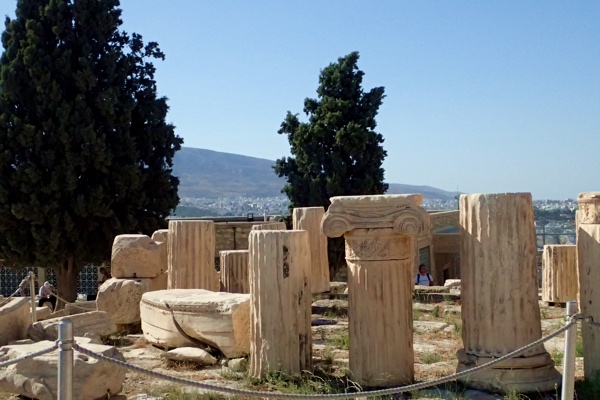 If you look carefully under the edge – you can see what looks like Lego brick markings…?  What’s that about? 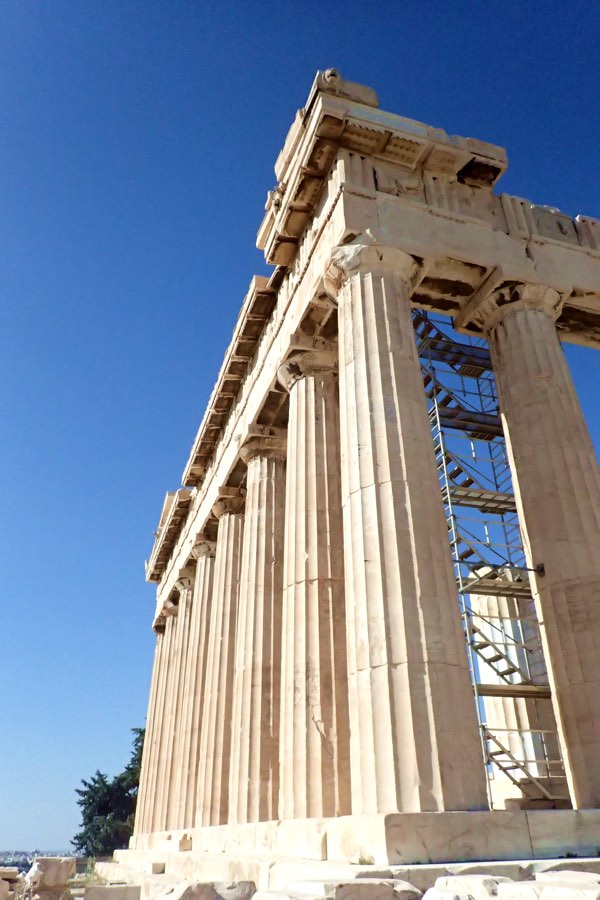 Porch of the Caryatids. 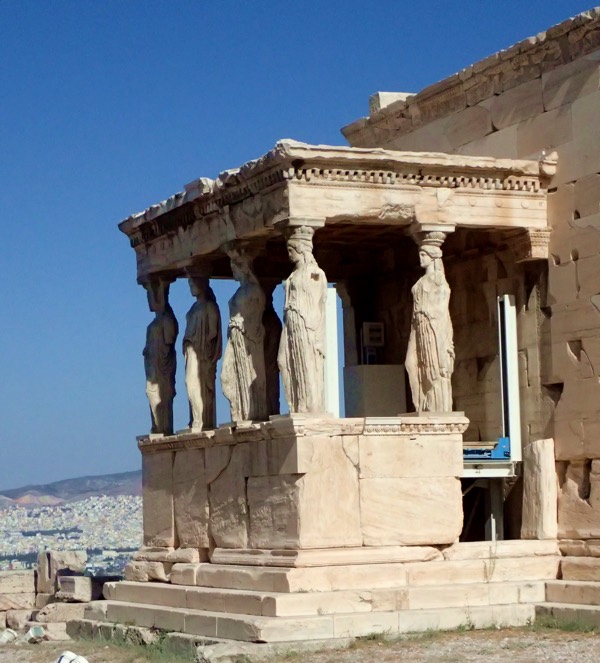 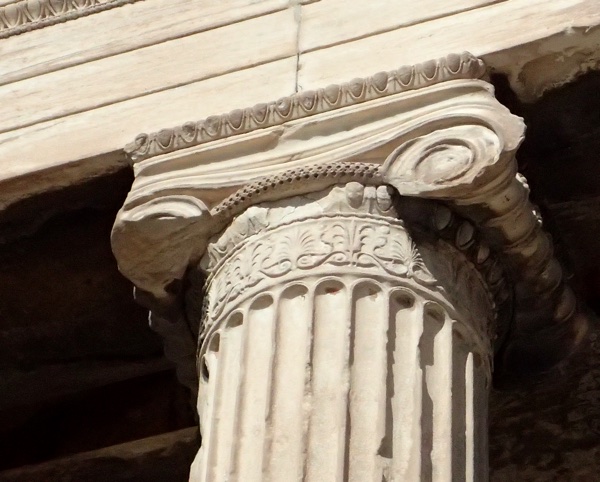 After we left the Acropolis, we did a drive by stop at the original Olympic Stadium that was built to host the competitive sports of 1896, and is where the Olympic torch passes for every modern Olympics. 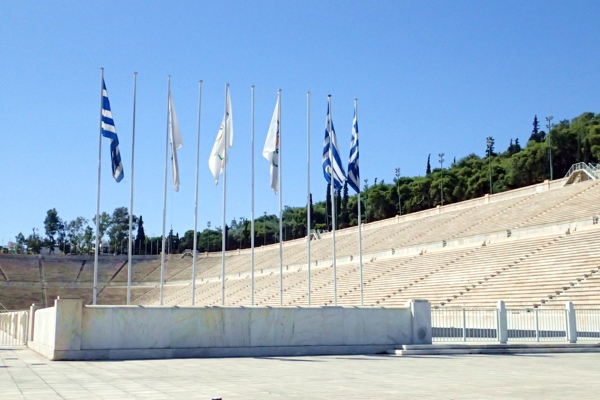 It was quite a beautiful stadium, but we were unable to go in, so from there we went to the Temple of Zeus which we had seen from the Acropolis.  The Temple of Zeus originally had 100 of these enormous columns holding up an gigantic roof, but now only about 17 remain.  It is not hard to imagine how impressive this building would have been with it’s large number of columns (even taller than those of the Parthenon) and large indoor space. 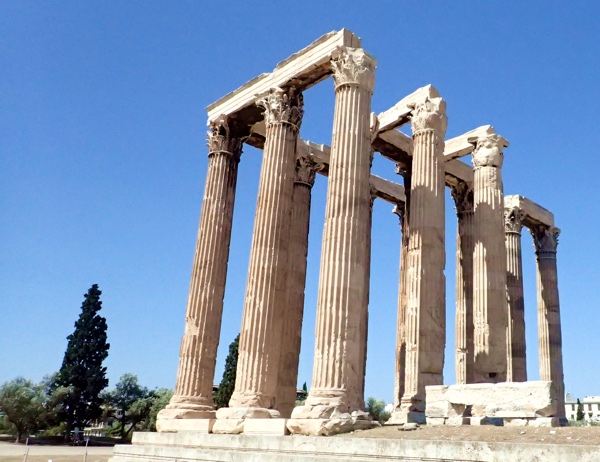 The kids were getting a bit restless with all this stuffy old history – so I asked them do build us a cheerleading pyramid.  🙂  On short notice, I think they did great! 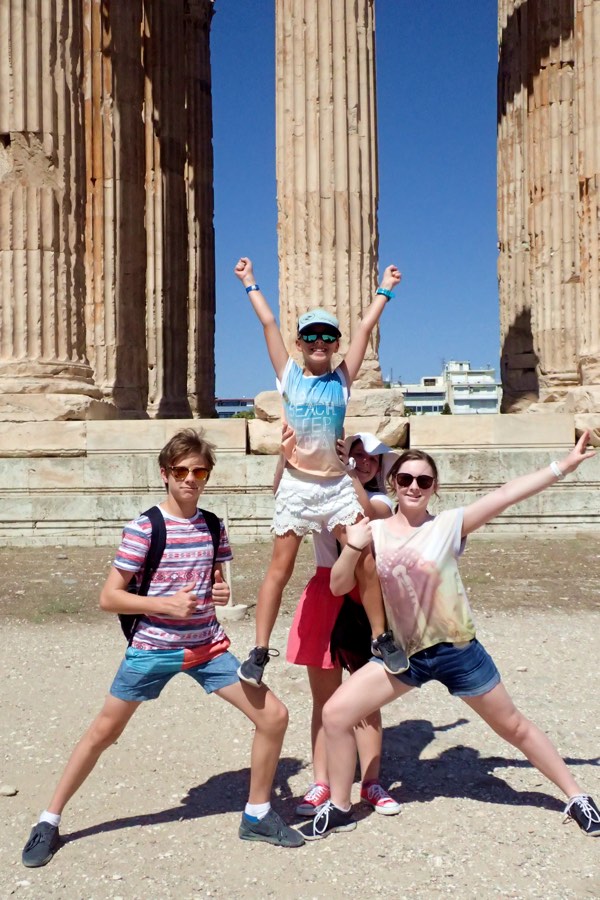 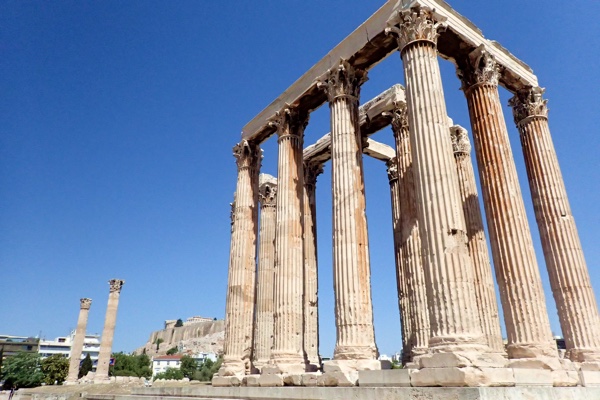 One of the columns was on the ground in broken form, which was in itself very interesting to see.  From photos you can’t always tell how the columns are constructed, and as one of the kids pointed out, they had always thought the columns were in one big piece of stone, but here you can see how they are carved to fit together and taper correctly for stability.  It was interesting to see this deconstructed column laying down, looking very much as if it were left where it had fallen. 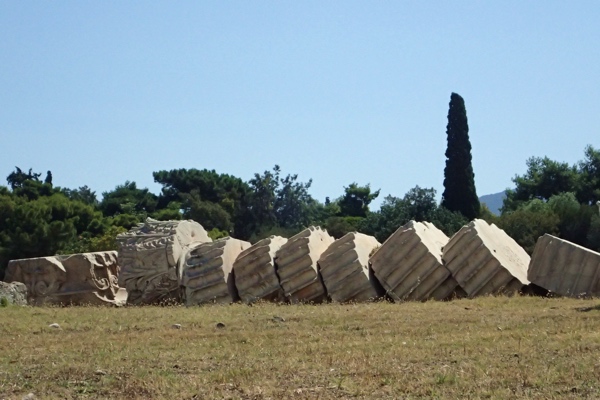 After this a quick drive around Constitution Avenue to see the guards at the Tomb of the Unknown Soldier – complete with funny be-pom-pom’d tap shoes.  We were on the half hour, so saw them perform their little routine.  It is a cross between the US Marines doing a change of the guard at Arlington Cemetery and Monty Python’s Ministry of Silly Walks.  Seriously.  Google up a Youtube video – you’re sure to find one, they look very odd. 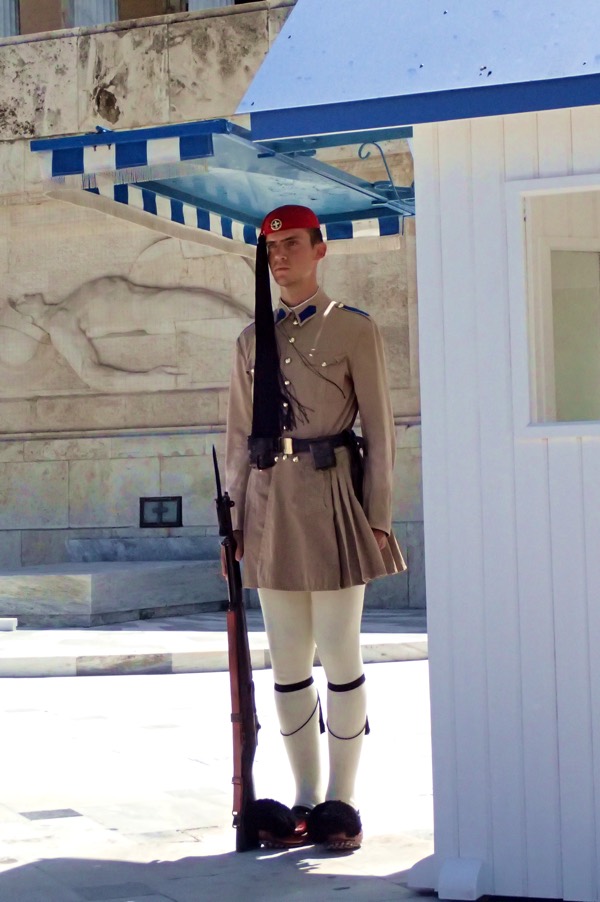 From there we went to the Agora – which represents the old Greek marketplace (late used as a Roman forum) where trade and commerce would be executed in the city centre.  There is spaces for worship, spaces for commerce, spaces for retail and trade.  There were also places of regulation here – someone to regulate coinage and stop counterfeiting, someone to regulate weights and measures, someone to regulate even the size of tiles made for construction.  Obviously since time immemorial, retailers and merchants have been trying fun and interesting things to rip off their customers, and vice versa! 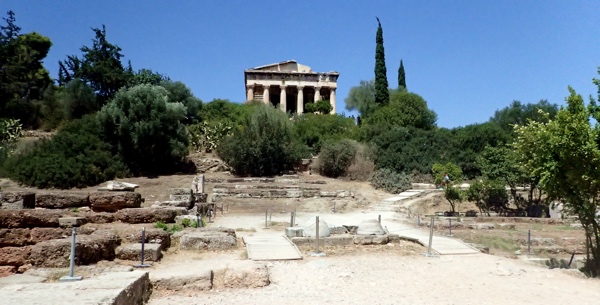 After all our traipsing about, we found ourselves having a leisurely lunch of way too much good Greek food – salads, mixed grilled meats, various tasty entrees, and we were served up so much food, we literally had an entire plate of meats left over that were probably going to end up being fed to local dogs.  Seriously – I thought American portion sizes were huge, they seem to have copied their ideas of ‘reasonable’ serving sizes from the Greeks! 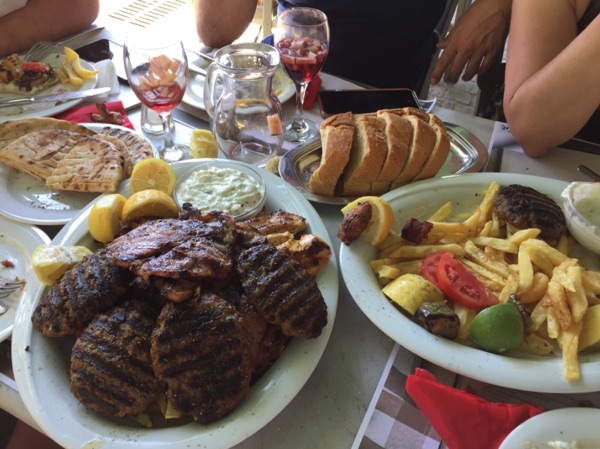 Lunch all tidily squared away we head off to the Plaka Markets for the afternoon.  My memory of the Plaka Markets was a vibrant quarter of the town on the south side of the Acropolis with loads and loads of souvenir shops, clothing stores, jewellery stores and all sorts of exotic delights.  We got there this afternoon though, and things seem to have altered dramatically.  Gone were all the stalls and over-friendly shop keepers chasing after you insisting you have broken their heart by walking on past their shop… and in their places seems to be cafe after cafe after cafe and a few spares shops thrown in.  And mostly tacky shopping at that.  This once living shopping district now seems to feel the best way to extract $$$ from tourists is through their stomachs.  So sad really.

I also noticed that Athens has changed in other ways too.  While the city seems cleaner in the air, and on the ground (didn’t see a single mattress or toilet cistern on the side of the roads!), high youth unemployment has yielded an inordinate amount of graffiti on nearly every building.  There is so much graffiti, that it would appear the authorities have given up on attempting to remove it.  It is seriously sad to see beautiful old buildings covered in painted tags.

All up we had a marvellous day out in Athens, though we are all foot sore, hot and tired at the end of it.  Tomorrow – hopefully we can set a slightly slower pace.  🙂