“I have never been in any rich man’s house which would not have looked the better for having a bonfire made… of nine-tenths of all that it held.” – William Morris on why the rest of us shoudl not give up our day jobs and become interior decorators.

Went out the the William Morris Gallery today in Walthamstow somewhere, and found a wonderful little free gallery that illustrate Morris’ art, his life, work and influence. Naturally I was very interested to see the works, but somewhat worried for my credit card as there was bound to be a bookshop and giftshop full of lovely reproductions of William Morris’ designs (I LOVE the Compton design on just bout anything) where I would surely buy some truly beautiful, but enormously expensive scarf, that I would never wear back in Brisbane … but I needn’t have preemptorily panicked as the gift shop was modest and filled mostly stationery and small knick knacks, and both myself and my credit card got out un-scarfed and unscathed respectively!

The exhibition has many printed, woven and embroidered fabrics, rugs, carpets, wallpapers, furniture, stained glass and painted tiles designed by Morris himself – as well as items painted and designed by his Chums from the Pre-Raphaelite Bortherhood – Edward Burne-Jones, Philip Webb, Dante Gabriel Rossetti, Ford Madox Brown, and others.  Together they eventually borrowed some moey from Morris’ mother to create the firm of Morris, Marshall, Faulkner & Company in 1861… eventually Morris & Co.

There were pleny of outstanding items on display including, Morris’ medieval-style helmet and sword that were made as props for the Pre-Raphaelite murals at the Oxford Union.  I also saw the original design for the Trellis wallpaper (the first of many Morris’ wallpapers).  They also have the gorgeous and famous Woodpecker tapestry woven at Morris’ Merton Abbey workshops, the Beauty and the Beast tiles and the Labours of the Months tile panels.  As well as works printed at Morris’ Kelmscott Press such as his own writings and the Poems of William Shakespeare and The Works of Geoffrey Chaucer.

They also have a substantial collection of furniture, textiles, ceramics and glass by Morris’ contemporaries in the Arts and Crafts movement, (the height of which was about 1880 to the 1920). Among those represented are Arthur Heygate Mackmurdo and the Century Guild, May Morris (Morris’ exceptional daughter who turned household embroidery into a thriving artform), William De Morgan, Ernest Gimson, Sidney Barnsley, Selwyn Image, George Jack, C. F. A. Voysey, Harry Powell, Henry Holiday, and Christopher Whall.

Much of the collection of is complemented by the Brangwyn Gift – Sir Frank Brangwyn was a former student of William Morris who collected many paintings, drawings and prints by Morris and the other Pre-Raphaelites that were later donated to this collection.

Upon leave the Gallery, I had the most unusual encounter in Walthamstow High Street… a good looking young man in a well fitting suit approached me and said, very amiably, “Hello. Have you had a good morning?”, to which I felt free to reply, “Why, yes.  I have thank you.”  He then proceeded to ask me if I have internet at home.  Ah, the penny drops, “Yes, I do, but at home in Australia.”… then the poor lad incapable of letting go of someone willing to reply to his innocuous opening questions starts asking me if I would consider changing providers.  I had to stop, look him dead in the face and say, “As I said, I live in Australia… I strongly doubt your company wants to solicit customers that far from their network.”  He then said, “Nooo. You’re not Australian, you don’t sound Australian at all… c’mon, where are you from?”  I had to flash him my passport before he would believe me.  He walked off very confused, and I wished him better luck with his next potential customer.

After this I head back to Covent Garden to have a look around the shops and find some lunch.  I have to admit, Covent Garden is nothing like it used to be… it used to be filled with heaps of fancy stores on the inside and surrounded by market stalls – the type you’d find in any market – nearby.  Now it feels like the market stalls are overtaken by people who are probably on Etsy selling over priced crap that no one needs. Not a hat stall or glove stall in sight and loads of custom printed aprons, over priced handmade silver jewellery, and 3D printed plastic London monuments. Mind, you could still get a bobble headed Queen so maybe I was over thinking that ‘too classy bit’, too much.

On my way back to the flat, I stopped at Marks and Sparks for what turned out to be another unusual encounter.  I’m off on my cruise tomorrow, so I decided to buy a bottle of Shiraz to take with me.  As I am going through the self service point, the register sets off an alarm for a store attendant to come check me out, I guess because alcohol is a restricted product and they want to check you’re not 12.  The store clerk comes over to me, and logs into the machine, and say “You’re right aren’t you?  Over the age for alcohol.” I laughed and said to him, “I’m 43, how much more ‘right’ do you need to be to buy a bottle of wine.”  He looks at me and says, “No, you’re not!  Can I see your ID please?”  I was a bit taken aback… carded at Marks and Sparks!  But not because he didn’t think I was over the legal age, but because he didn’t I was as old as I was claiming to be!  *scoff*  Weirdos.

Tonight I caught up with Stephola for a few pints at the Prince of Wales in Covent Garden before heading out to the most amazing dinner at a lovely place called Sarastro with Stephola. 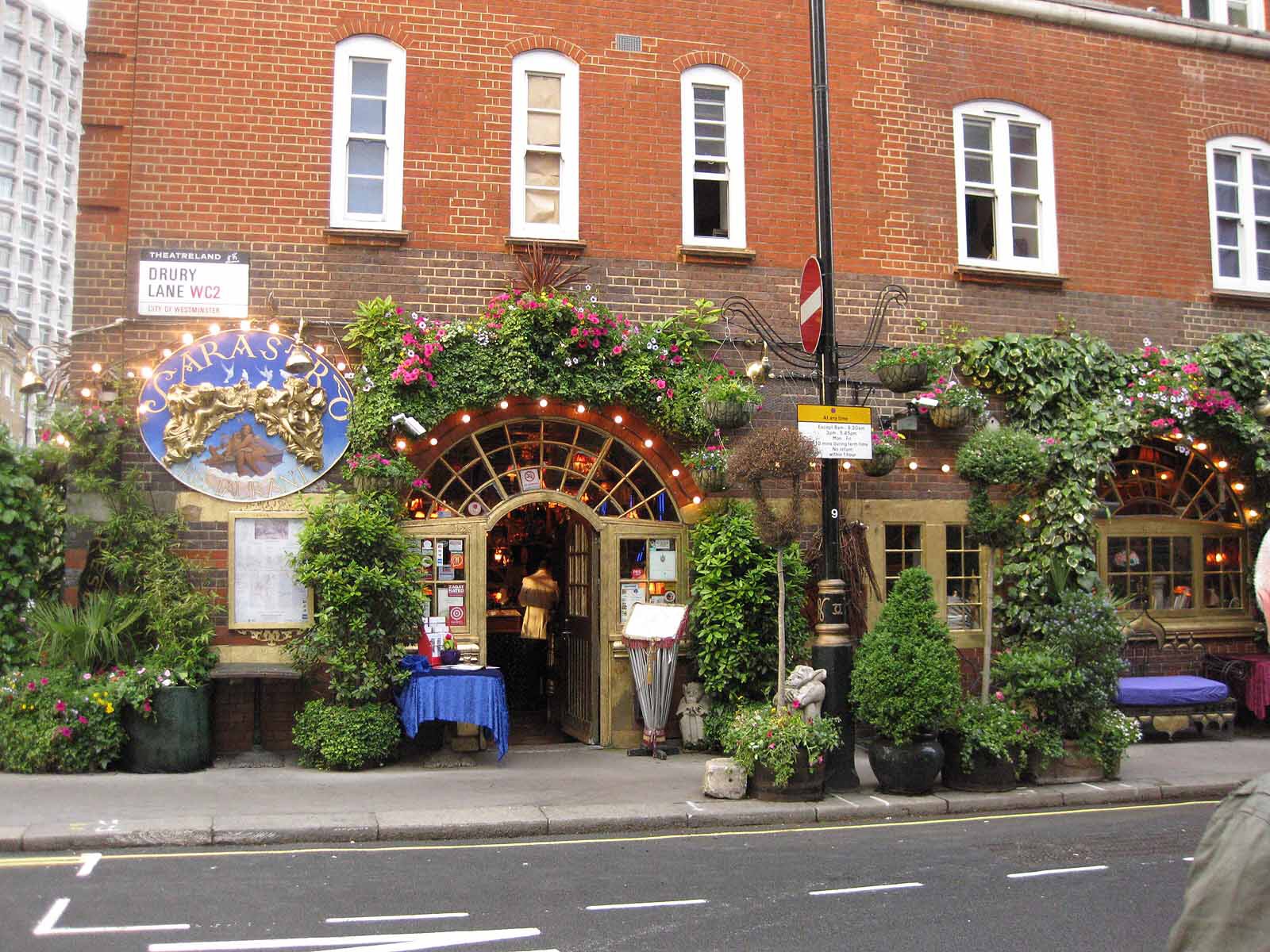 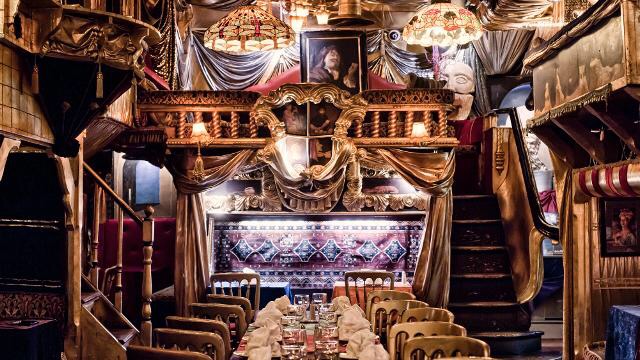 Sarastro has the most crazy and quirky decore. Outside it is an overgrown cottage garden climbing the walls.  Insider there are delightfully cosy booth spaces and hidden balconette tables amidst a veritable feast for the eyes in an all round fabulous atmosphere and the most delicious Mediterranean inspired food. 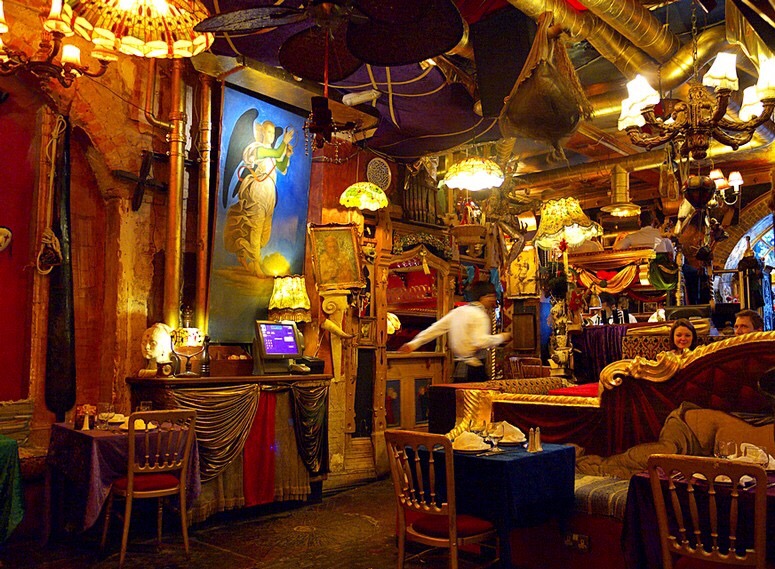 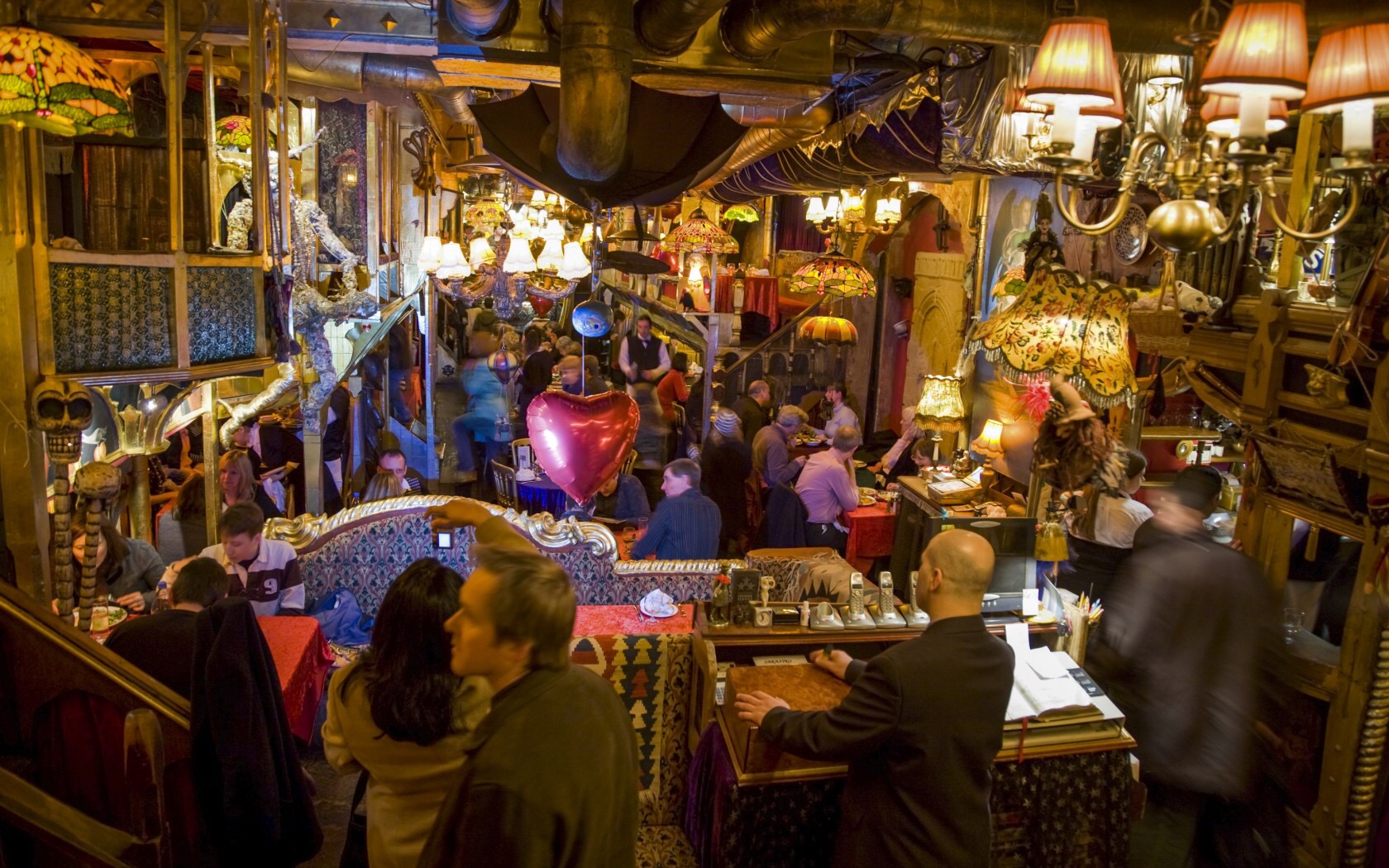 We talked about old times and mutual acquaintances (there surely were plenty of ears burning back in Australia!), giggled like high school girls, and there may have even been a tear or two over lost loves, lost family members and the sadder dramatic moments of our lives.  It occurs to me that I am truly blessed to have friends like these – ones that I may not see for years, but when you do get together, you realise how much they mean to you and how much they have your back should you ever need them… and thanks to the Internet, the miles just melt away.
I had ever such a lovely evening, and if it weren’t for the hideous 30 hour transit, I’d suggest we meet up and do it every year or so!