Information on what to expect at the Gion Festival (Gion Matsuri), IN ENGLISH is really kinda sparse, and often quite contradictory, so we had no idea where we should go or when to check out the festitivites.  We knew that the Shijo-dori St.would be closed to the public on Wednesday and Thursday night, and our host kindly told us that there would be food stalls and games set up… from 6pm. 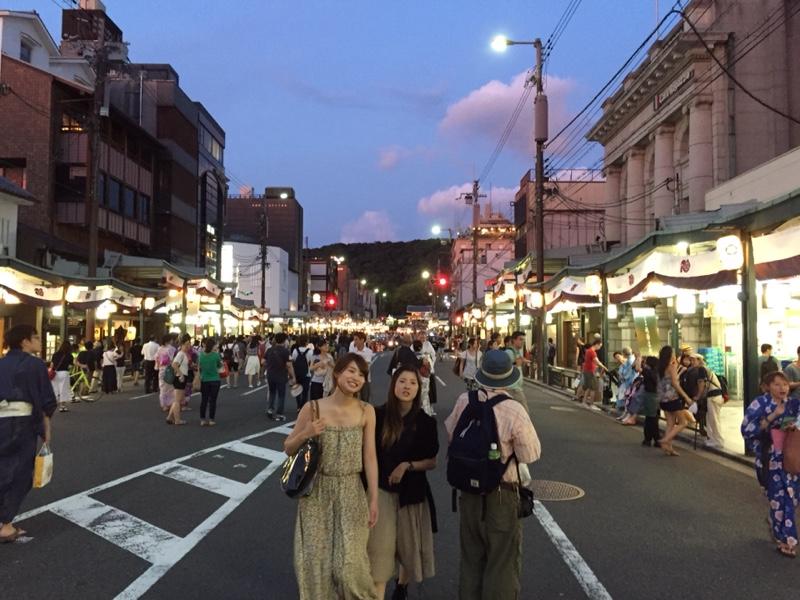 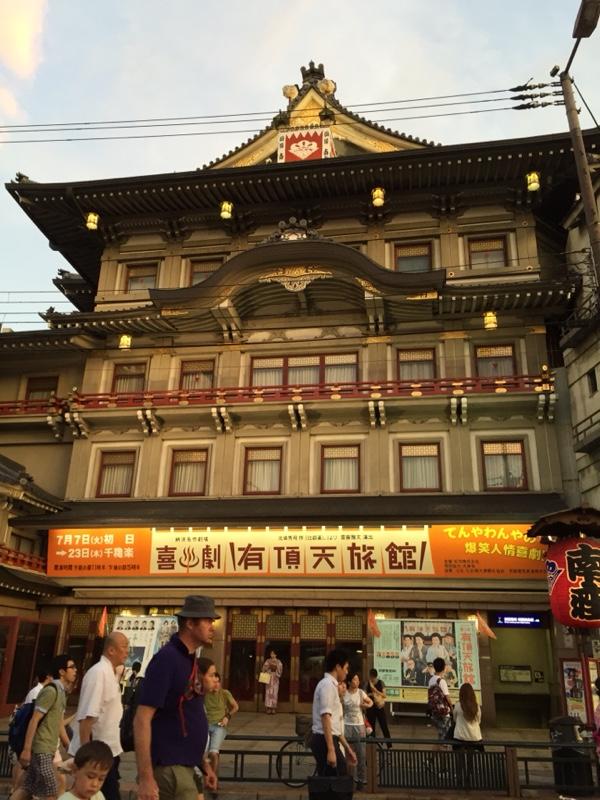 So we head down to Shijo-dori St, Gion at about 6pm and look around wondering how they are going to pull this off?  There is plenty of traffic making it’s way down the street and it doesn’t look anything ilke a street at home would if it was being pedestrianised for a market environment. Eventually police emerge from who knows where and start directing traffic around the area and the street closes down, however… as we anticipated, no stalls emerge.  We pottered around doing a bit of shopping and looking at all the lovely ladies walking around in their kimono, you don’t see that much in Tokyo.  And I have to admit I was tickled by all the young girls in their lovely traditional kimono shopping to their hearts content at the dedicated Hello Kitty stores!  I have the impression they are mostly Chinese tourists getting into the swing of the festival. 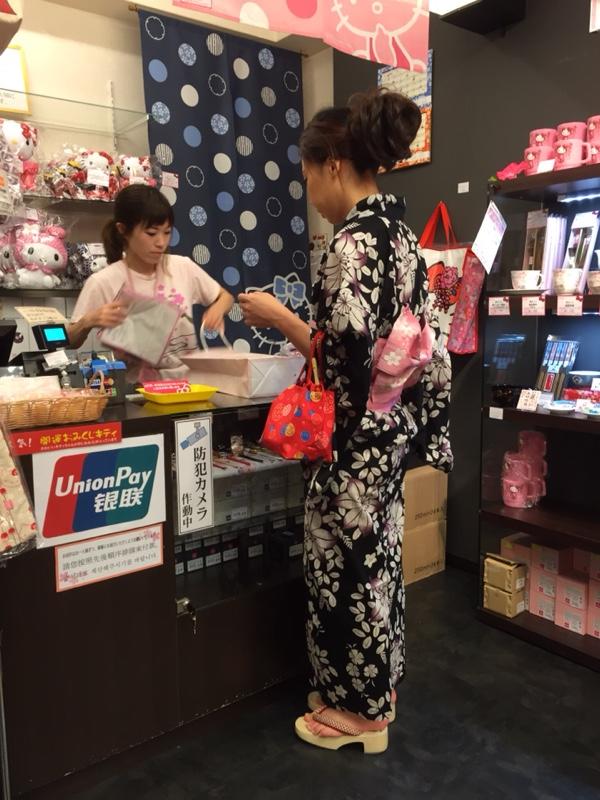 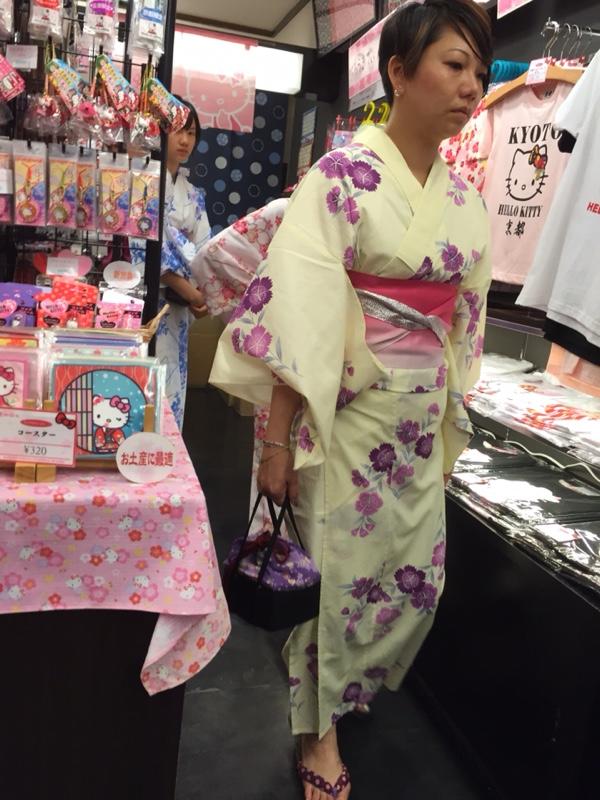 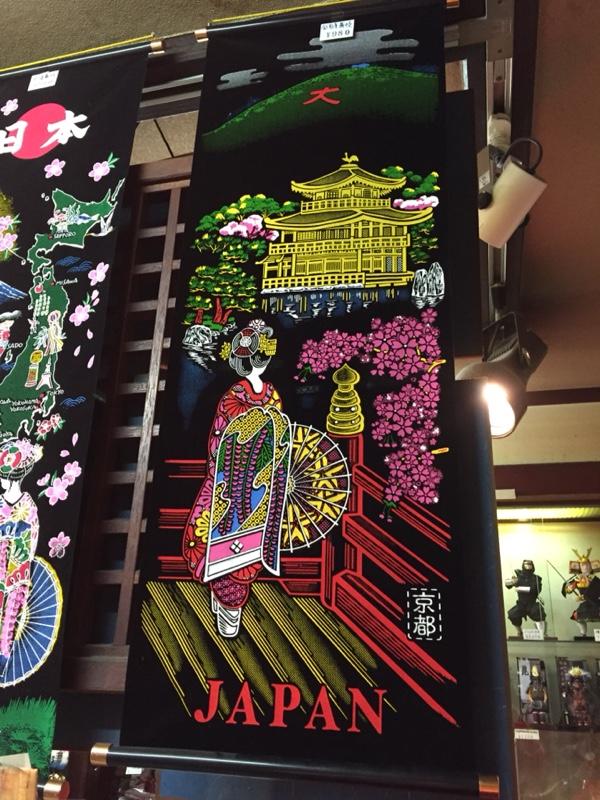 Eventually we decide to go have some dinner and wait for the stalls and things to be set up.   So we stop in for some mystery donburi bowls, volcanically hot curry bowls and suprise noodles and emerge to a street with people walking everywhere but… no maket stalls?  We made our way all the way up Shijo-dori St towards the Yasaka-jina Shrine… where we found markets!  I have no idea why they have closed off the street – there are plenty of people around, but it’s not busy enough to warrant closing off a major four lane street?  Yes, the footpaths would have been a bit of crush if they hadn’t, but it still seems kinda odd. 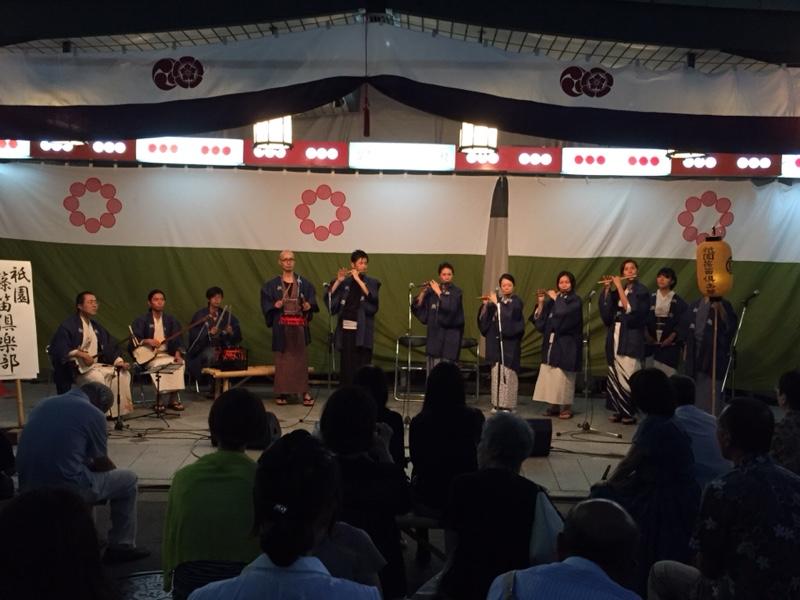 It was all up around the Shrine that we encountered the markets.  The walkways around the shrine are wide enough for a car to drive through and give berth to pedestrians, but when you put a market stall on both sides and add hundreds of people, it was a little squeezy.  Thankfully with this Typhoon Nangka heading our way there is a bit of a breeze up (yes, did I mention that our host messaged us to let us know there was a typhoon coming and we should be careful?) else it would have been quite disgustingly hot and sticky. 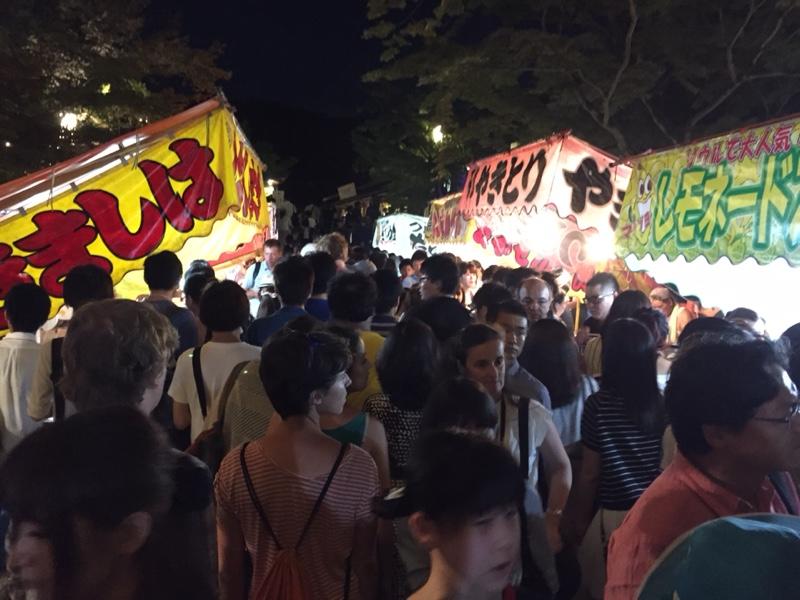 So we found the meat-on-a-stick festival – crab-on-a-stick, chicken-on-a-stick, beef-on-a-stick, confectionery-on-a stick, and had a few things to eat.  Should have tried the takoyaki, but was full up of crab-on-a-stick considering we had already had dinner!  Love the hand operated ice shaving machine making far superior frozen drinks than what the Frozen Coke machines at the cinemas have been making back home lately.  🙂 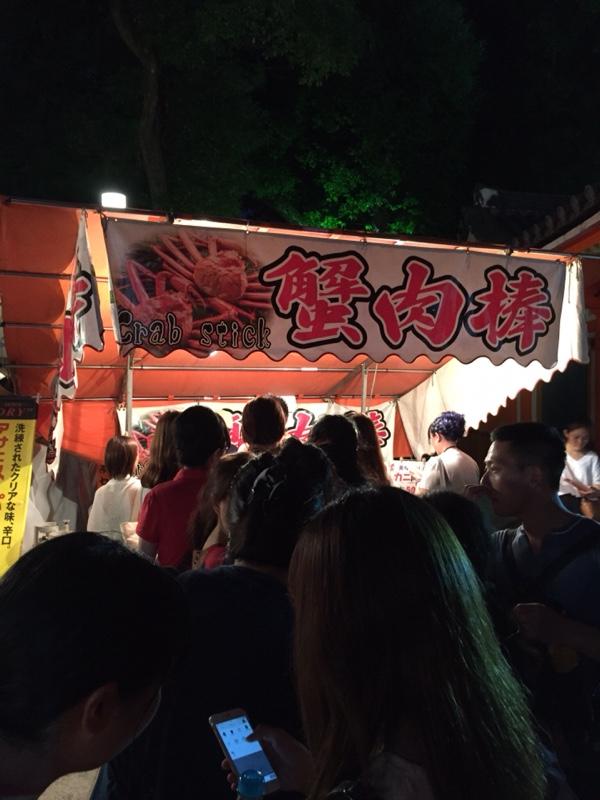 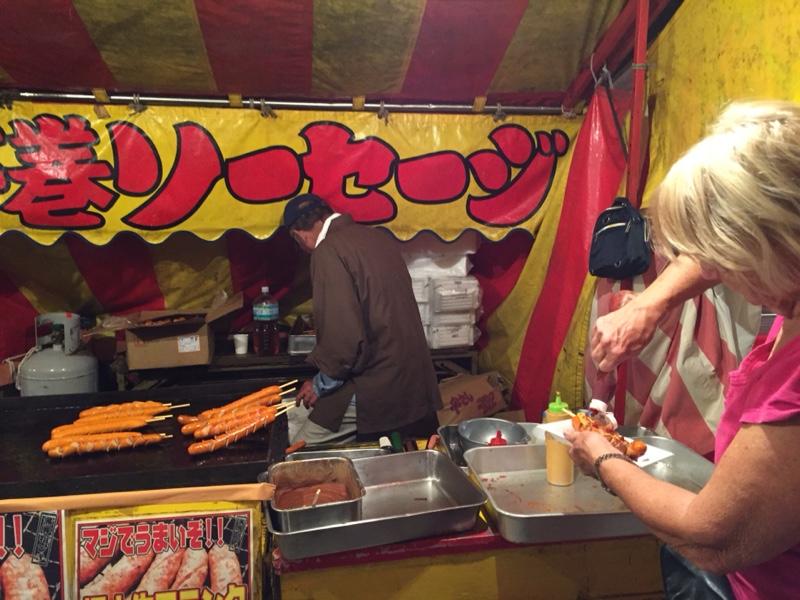 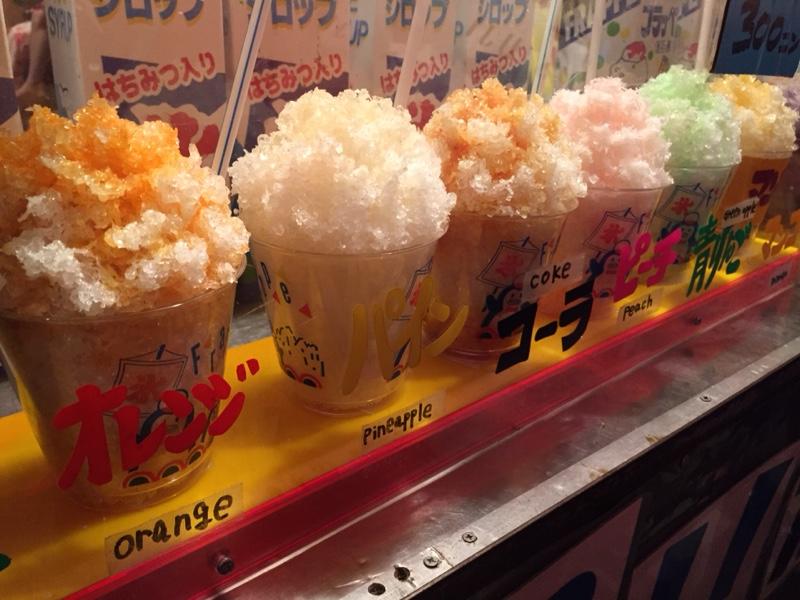 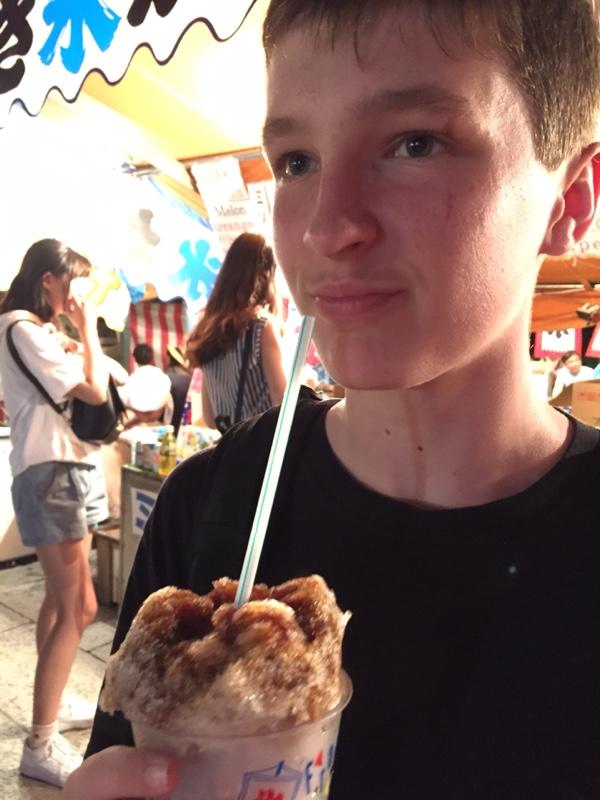 The Yakaka Shrine looked very pretty all lit up at night, there were policemen around stopping people taking photos – here are the few I took.  The golden portable shrines you can see in the centre were not there a few days ago, so were out on display for the festival.  We understand tomorrow night there is supposed to be a show of some sort, a performance? happening here… but the typhoon outlook does not look good, and we may find ourselves prevented from coming back out Thursday night.  Friday from 9am is when the big parade is scheduled to happen… but we’ll be back on the bullet train heading for the ship by then. 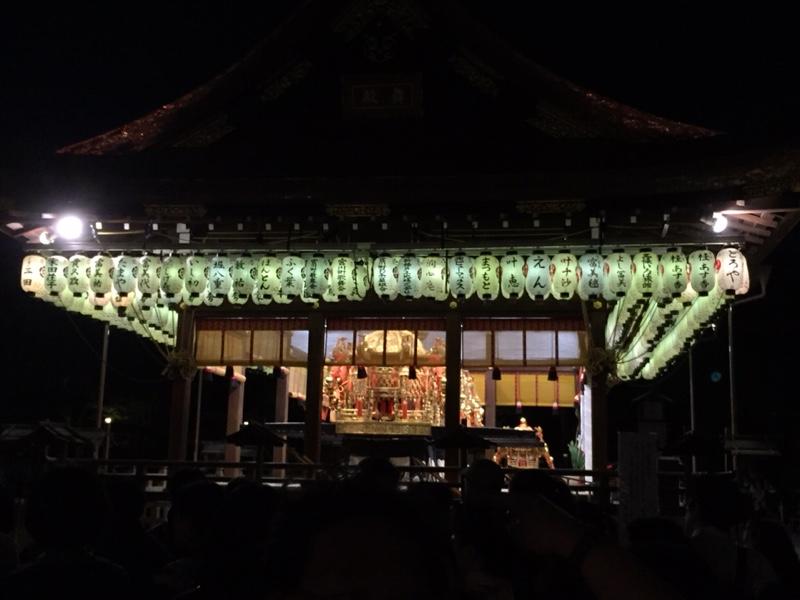 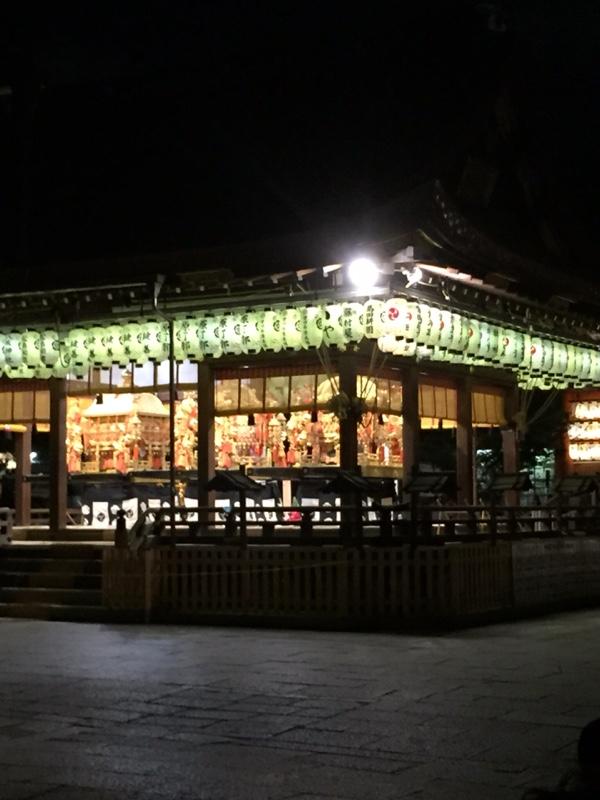 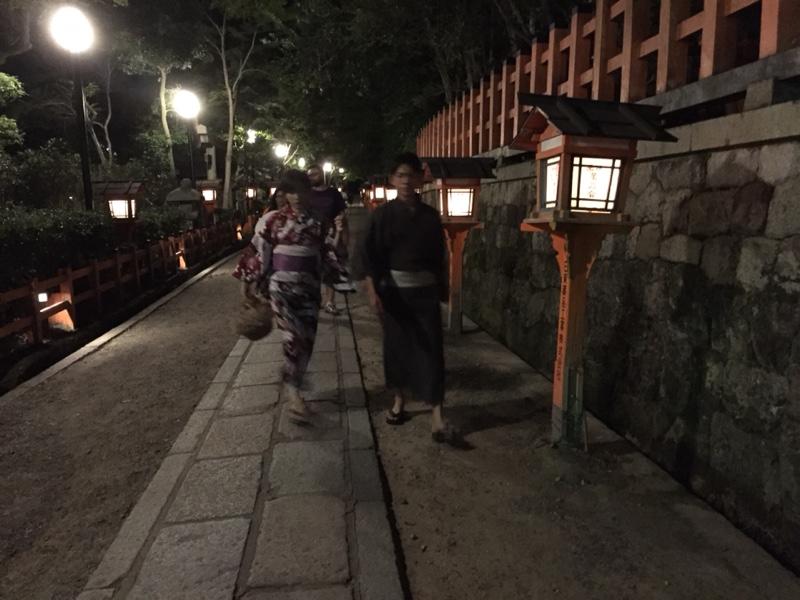 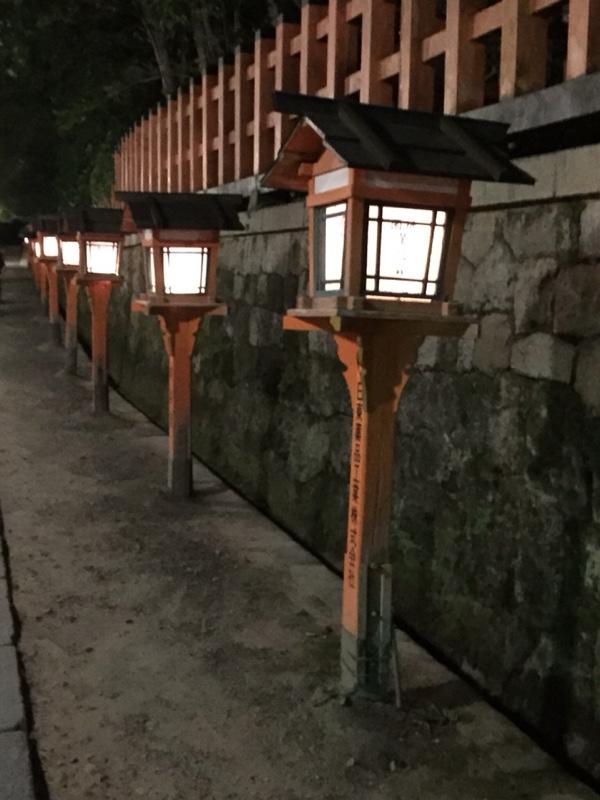 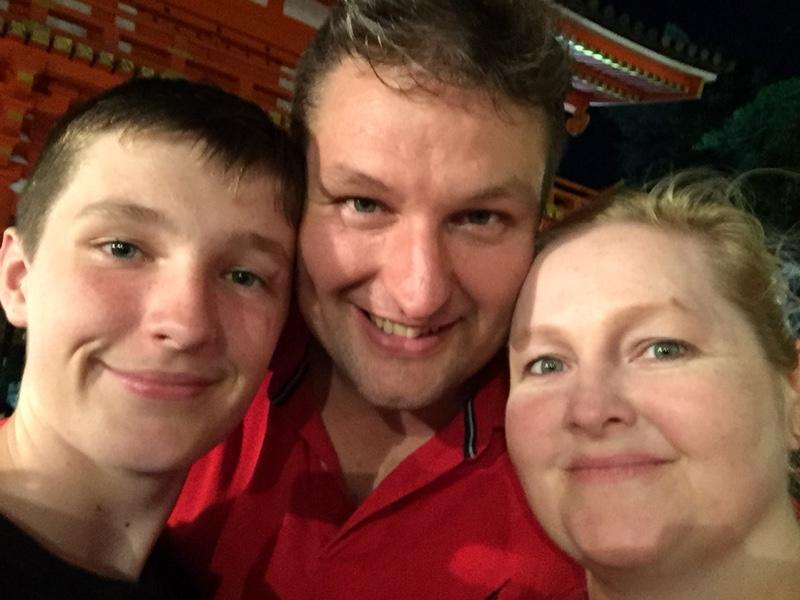 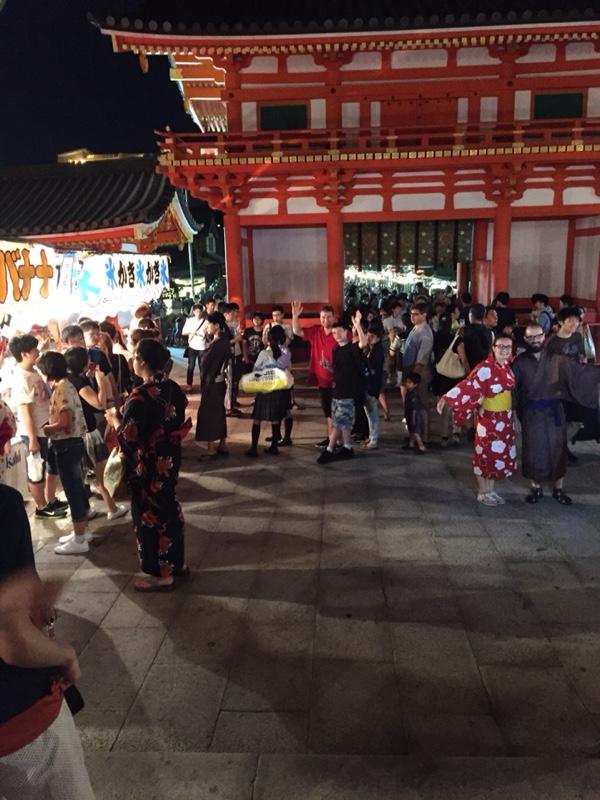 UPDATE:
The big parade is apparently on Friday – IF, and that is a big ‘if’ apparently, Typhoon Nangka behaves itself.  It is headed our way and likely to cross the coast tonight somewhere towards Osaka, so we’re battening down the hatches.  It’s a Cat 2-3 at the moment but should down grade a bit, they hope.

The Gion Festival takes place every year in the Gion District of Kyoto and has done since 869AD.  The parade, which is the finale of the festival, was originally a religious purification ritual designed to appease the gods that were believed to cause fires, floods and earthquakes.  People suffering from plague and pestilence was also attributed to the rampaging deity Gozu Tenno who was also to be appeased by the parade.  At some point, the Emperor Seiwa ordered that people pray to the god of the Yaaka Shrine (named Susanoo-no-mikoto) and 66 stylized and decorated floats were made representing each of Japan’s 66 provinces.  The ritual of the parade was done whenever large scale fire, floods or earthquakes or plagues appeared.  Some time around 970AD, it became an annual event.  Over time the wealthy and influential merchant class have made the parade, and the entire festival, more elaborate and by the end of the Edo period… Edo period, Edo period… Ah! Here it is 1603-1868), the elite used the parade to display and increase their status.  So it’s been going on for a very, very long time.

Anyway, we were back down in Gion today and managed to get a glimpse of people building the parade floats for the big parade whenever it ends up scheduled for.  They are really tall and look very traditional, with lots of timber, fine fabrics, and fresh hemp rope used in the construction.  No doubt will look amazing when the parade kicks off on Friday. 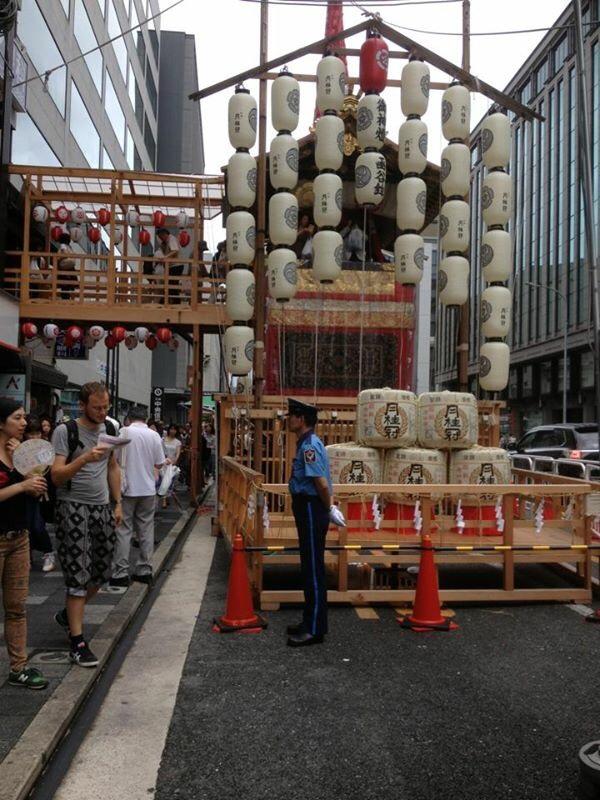 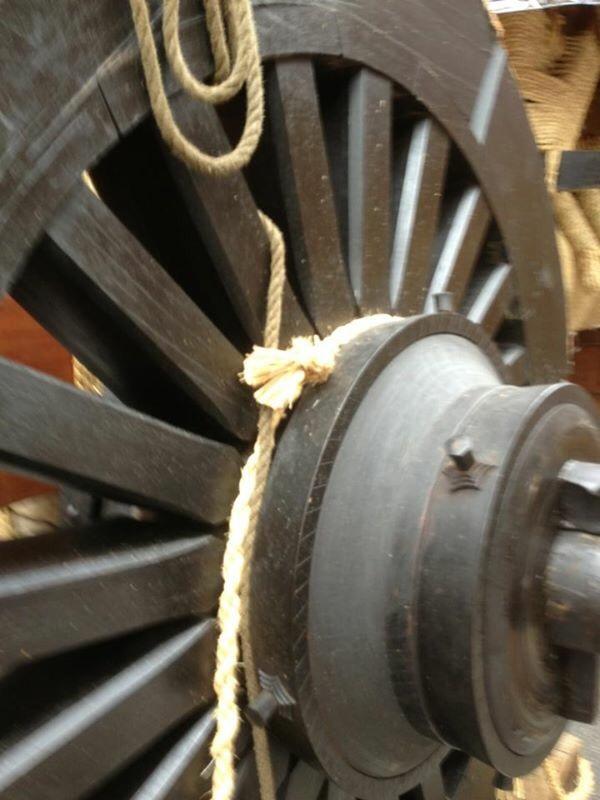 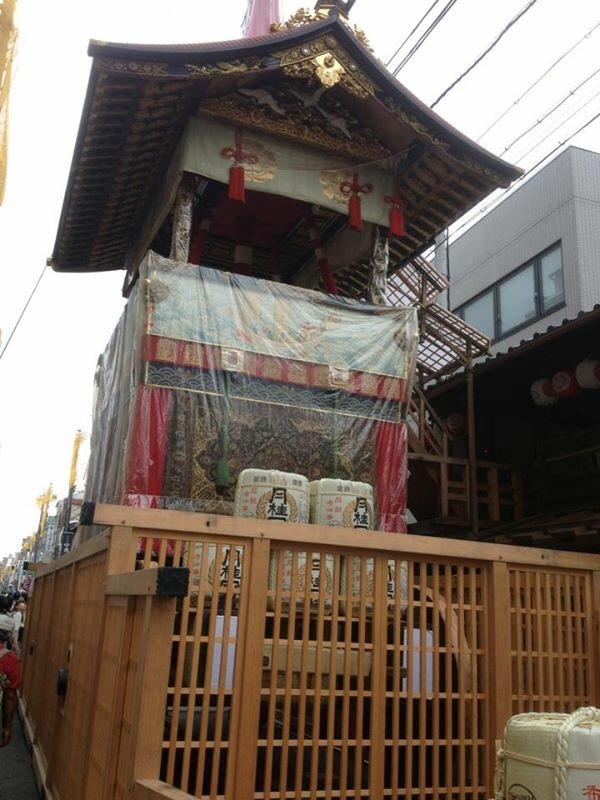 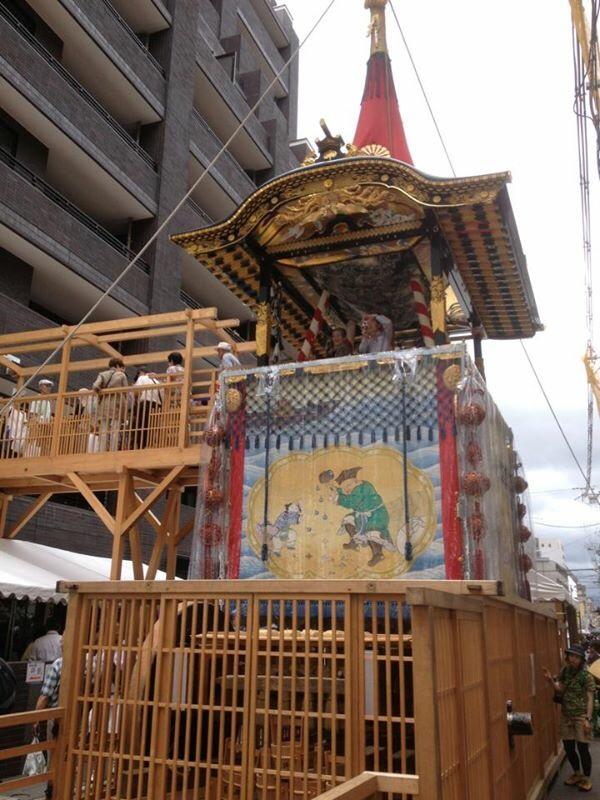 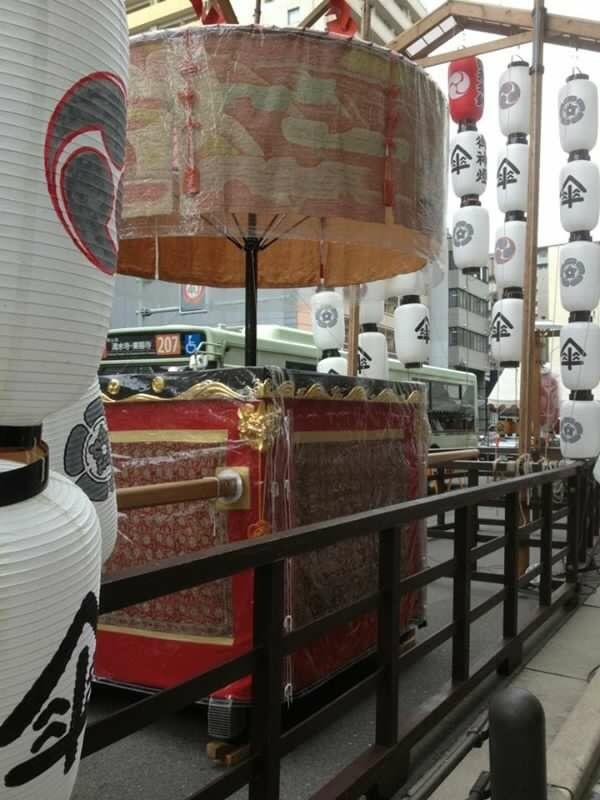 Oh and I should mention that unlike Mardi Gras in New Orleans where floats are either converted vehicles or pulled by tractors, these floats are pulled by people.  Which in this heat and the length of the parade route must be quite a feat of stamina.