One of my favourite words in the English language is ‘defenestrate / defenestration / defenestrating’… the act of throwing a thing, especially a person, out of a window!  Latin – ‘de’ meaning ‘from’; ‘fenestr’ meaning ‘a window’ – awesome word, fabulously vivid concept.  But I’ve no sooner started writing and already and I’ve digressed from my purpose, because all I was wondering is if there is an equally vibrant word to describe the ‘coming out of one’s shell’?  Because that is what we are seeing here with out little foster charge, Alaska.

And my, oh my, is it an extremely slow coming out of one’s shell that we are watching.  She’s progressing at about the same rate as the pitch drop experiment at UQ I reckon.  Which is why I’ve been keeping notes… this way if I notice the little things, they look like leaps and bounds when we refer back to how she was at the beginning.

Friday, August 23rd 2013 at 9:43pm
Alaska has had a good couple of days, it’s been a week since we had any snappish behaviour from her and she stole one of my shoes and took it off to her crate with her!  I know it sounds like no big deal (and even something that you might normally get cross with a puppy about), but it meant that she had come out of the bathroom, gone down the hallway (about 5m), crossed the kitchen (another 6m), traversed the lounge room (a huge 7m of open space), past the entry hall (2m more) and into the master bedroom to find a shoe and steal away with it back to the bathroom!  Huge day of exploring for the gorgeous little girl.  I was so proud that she had ventured out of her comfort zone (read: crate) and gone looking for treasures to take back with her.  We have since seen many socks end up in the crate too.  Yay for Alaska!  Sally forth and explore little miss, there’s no need to be so shy! 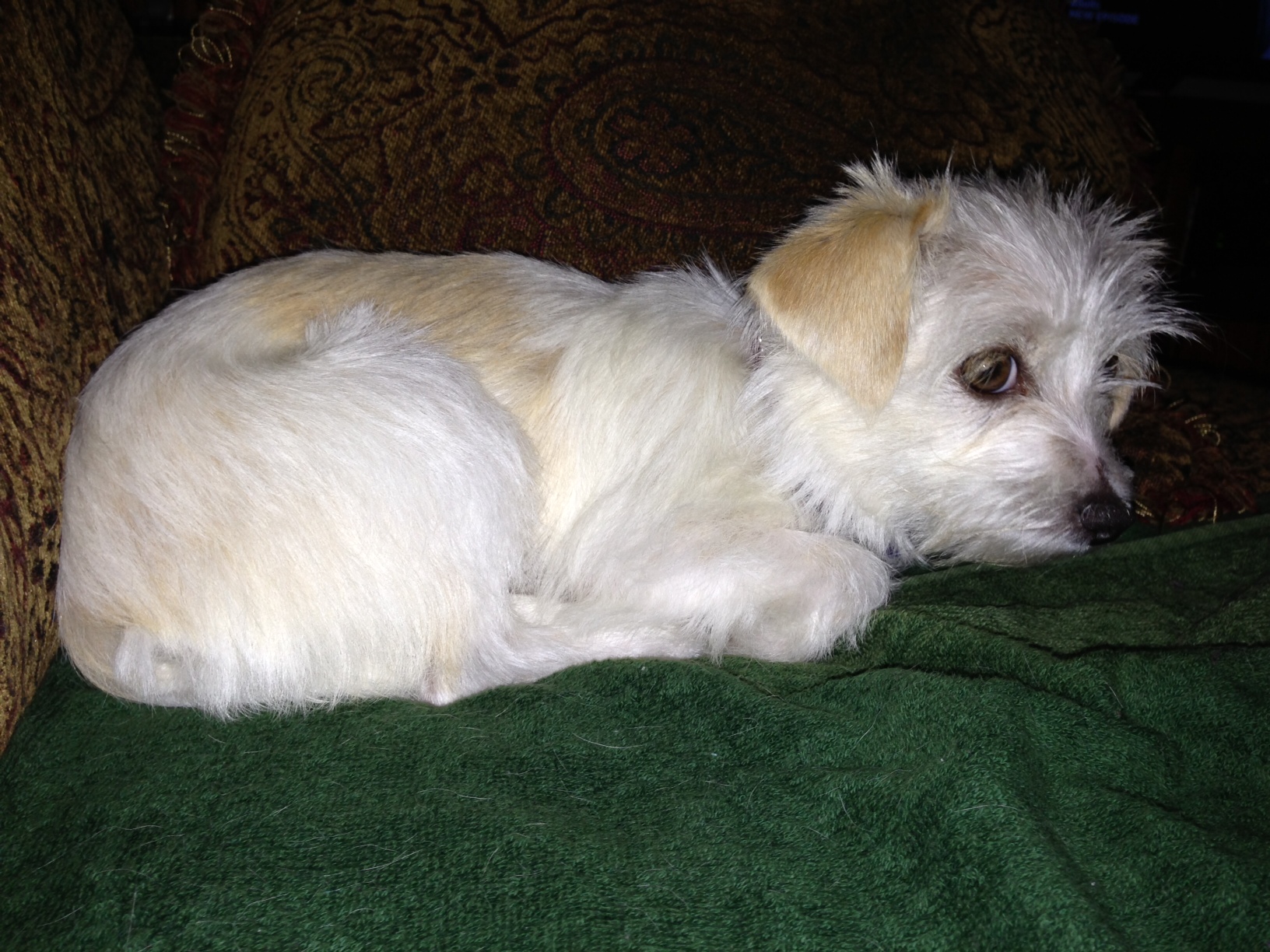 Sunday, August 25th 2013 at 11:20pm
I’ve been away all weekend on a course, so Alaska has been hanging out with Mr K and the Small Child.  She’s had a relaxing time hanging out in the study at Mr K’s feet and sitting on a pillow in the sun, and just hanging out with boys.  She’s getting less and less frightening of everyone and, while she is still flinching at our hands, she is getting used to being picked up and handled.  She and Dixie are forming an uneasy friendship.  Dixie is getting used to the fact that she isn’t missing out on treats that Alaska gets, that they are evenly shared out and Alaska is less frightened when Dixie gets exuberant and wants to play.  Big kudos all round for moose and squirrel… (terrier and terrier sounded kinda boring). 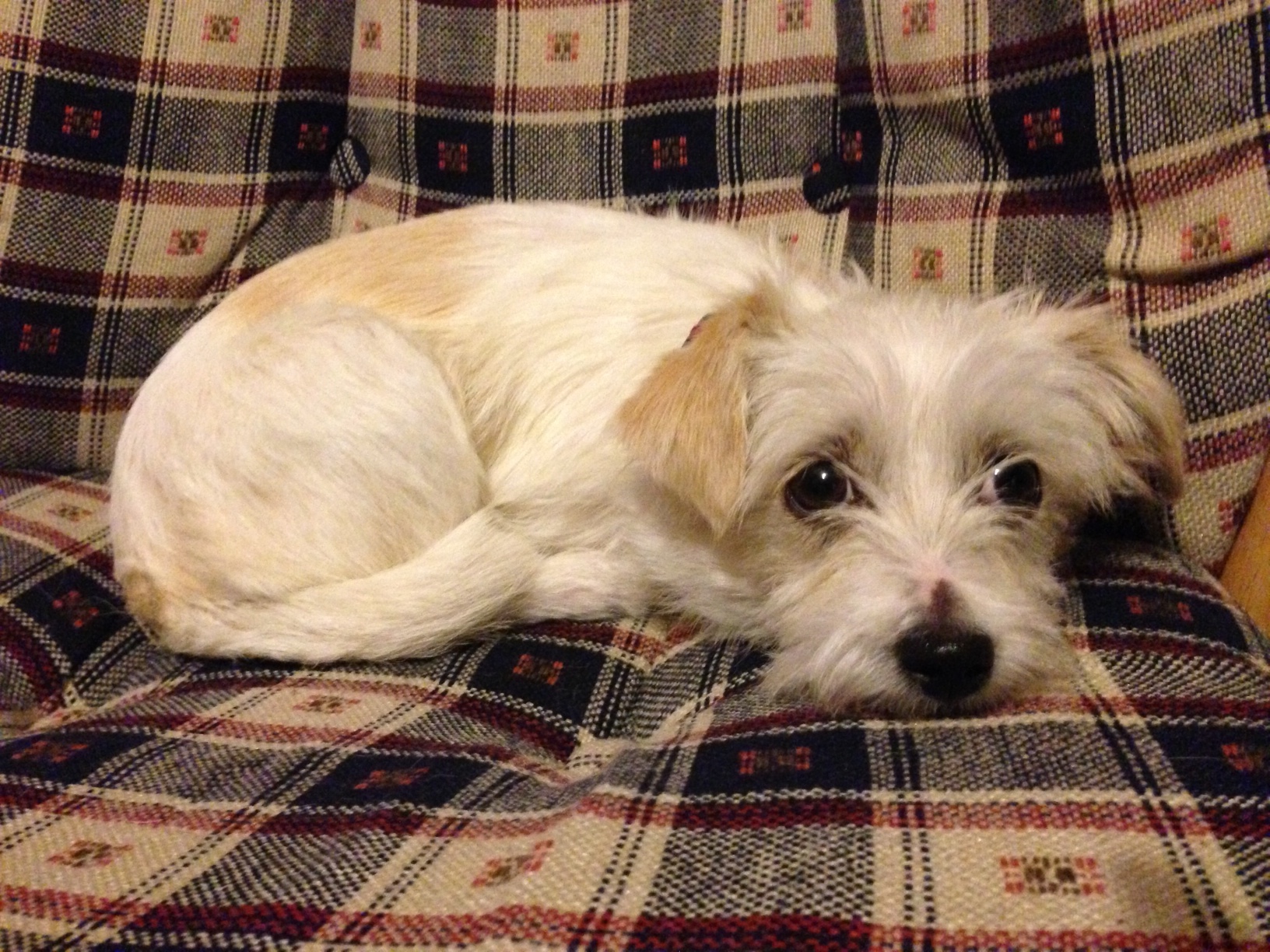 Tuesday, August 27th 2013 at 6:30pm
The gorgeous little girl has been coming out of her room to investigate the yummy smells at dinner time when I’m in the kitchen.  For her efforts she’s been rewarded with some tidbits of mince meat and some diced lamb over the last two nights.  She seems to come shyly around the island bench and stands back trying to vocalize that she’s interested.  I’ve heard her growl and snarl but never heard her bark yet… but this is different, it’s a kind of… “I’m over here, I don’t know what you have or what you are doing but I’m interested, so don’t ignore me, please!” noise.  It’s a very cute, unusual sound for a dog to make and it it reminds me of the noises that the red, bald Futurama character with the crab claws for hands makes – like a wobbly uncertain wibble noise. 🙂  I’ve made sure to keep giving her treats directly from my hand which causes her all sorts of angst… she wants the treat but doesn’t want to get close enough to get touched/caught so she prances and dance lightly around on her feet making this noise until she works up the courage to come close enough to get the treat.  As the days go by we are getting less dithering at a safe distance and more ‘advance, retreat, advance some more’ type of movement before she comes in to steal her treat away as swiftly as she can.

I’m discovering it’s awful hard to chastize a puppy for toilet training purposes, when you’re doing your absolute best to let her know that people aren’t to be feared and trying hard to gain her confidence.  We don’t want her learning bad habits, but we don’t want to be rousing on her and making her more fearful of us either – bit of a catch 22 that one.  So tonight, she when peed in the hallway, I didn’t get cross at her at… all the Small Child thought it was adorable that she peed a love heart.  :S 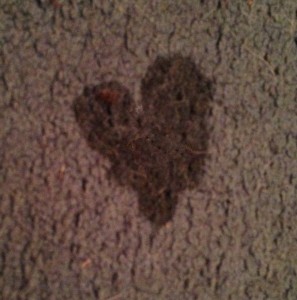 Wednesday, August 28th at 8:35pm.
I’m writing this with a cute little Alaska holed up in my jumper!  That’s right, not only has she become okay with sitting in our laps and having cuddles and pats for extended periods, tonight, she was wrapped up in my jumper and stayed close and happy for the length of two Suits episodes!  Gorgeous little thing seems to be not only getting used to being close to people, but to enjoy being close and is starting to show signs of enjoying having us around.  We have seen more and more tail wagging going on when she is excited – mostly this is from a safe distance when we are playing and cuddling with Dixie.  She moves a ‘safe’ perimeter and watches us playing with Dixie, making the same “don’t forget about me” noises that she makes in the kitchen for treats but still not sure enough of herself to come in close and just get herself some cuddles too.  She’s much more relaxed being handled and petted now compared to even this time last week. I’m really pleased that she is coming along, though it is still disheartening to see that as soon as she is left to her own recognisance she retreats to her crate post haste.  But bundled into the jumper – she sure was cosy and happy and is definitely getting used to us and is much less fearful than she was.  🙂   Slowly but surely. 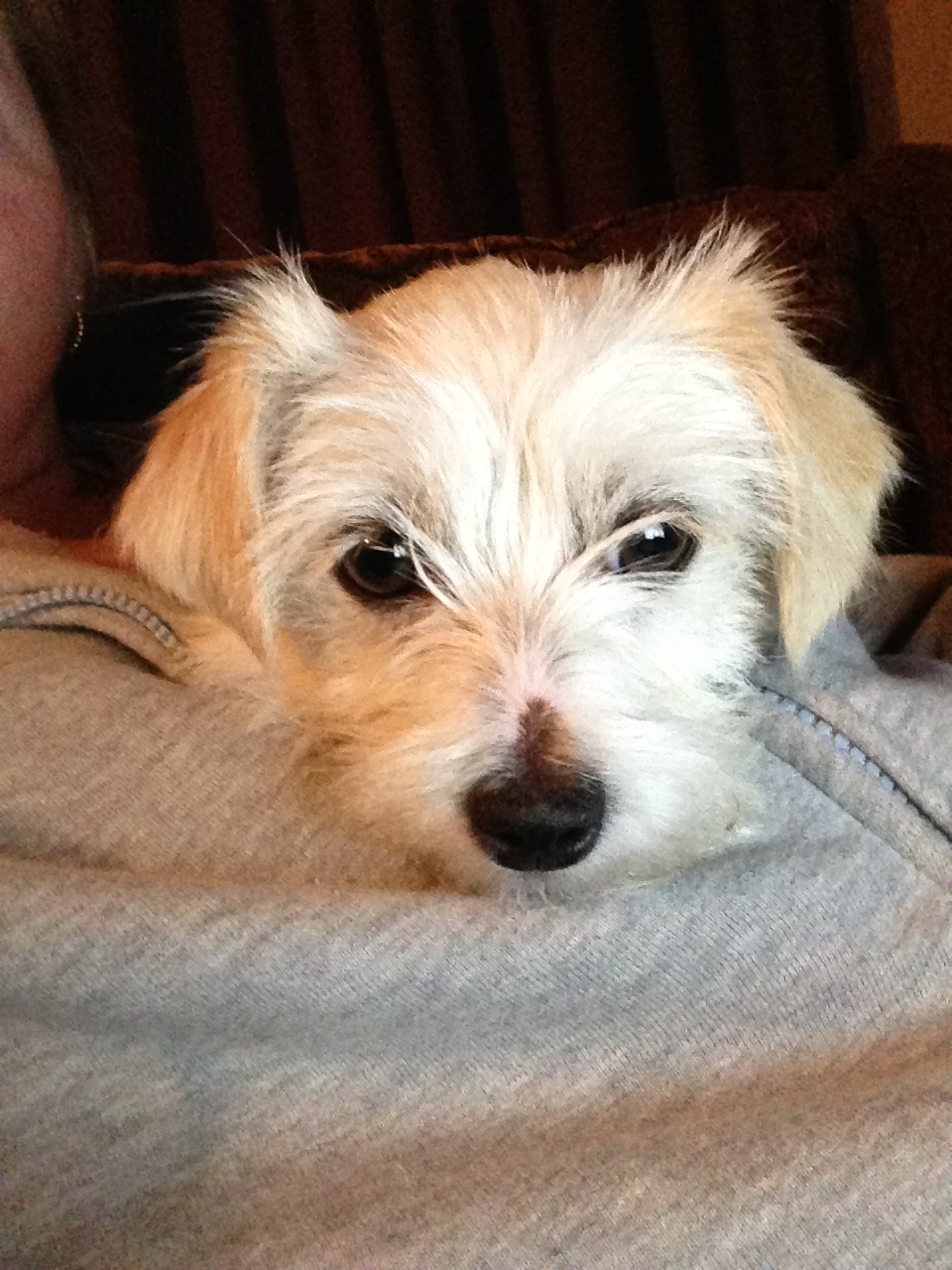 Thursday, 29th August 2013 at 9:03pm
We have had a fabulous day!  Amazingly Alaska has finally started following me around the house and interested in what I am doing.  She’s keen to see what’s happening in the kitchen and has been happily sitting beside me in the living room while I work on the laptop.  She’s even been trying to nudge Dixie out of the way a bit so she can get the closer spot next to me, which is awesome.  I’ve seen more tail wagging today than I’ve seen all week and tonight, she let me roll her onto her back for about 20 mins for a big tummy rub!  I never thought we’d get to proper relaxed tummy rubs so quickly after the way she has been acting, but it was awesome.  She was even relaxed enough to stretch back her head and not be still looking around warily.  We loved it.  We had a nice visit with my Mum and Alaska was very shy of her at first but warmed to her readily after the initial reluctance.

After that we have spent the afternoon having cuddles and coming to take treats from my hands … still with the dancing routine, but she’s getting braver every day.  This evening I went into the study and saw that she had jumped up onto a chair and made herself comfortable.  Which is so awesome… she was just curled up on the chair having a rest there instead of in her crate!  🙂  So here is a pic I took this evening where she is starting to look like the little puppy that I think she could be… her posture is changing entirely – she’s more upright and not cringing or trying to blend into the furniture or the walls, and she’s finally showing us that she is starting to come out of her shell (totally promise she won’t go out a window!). 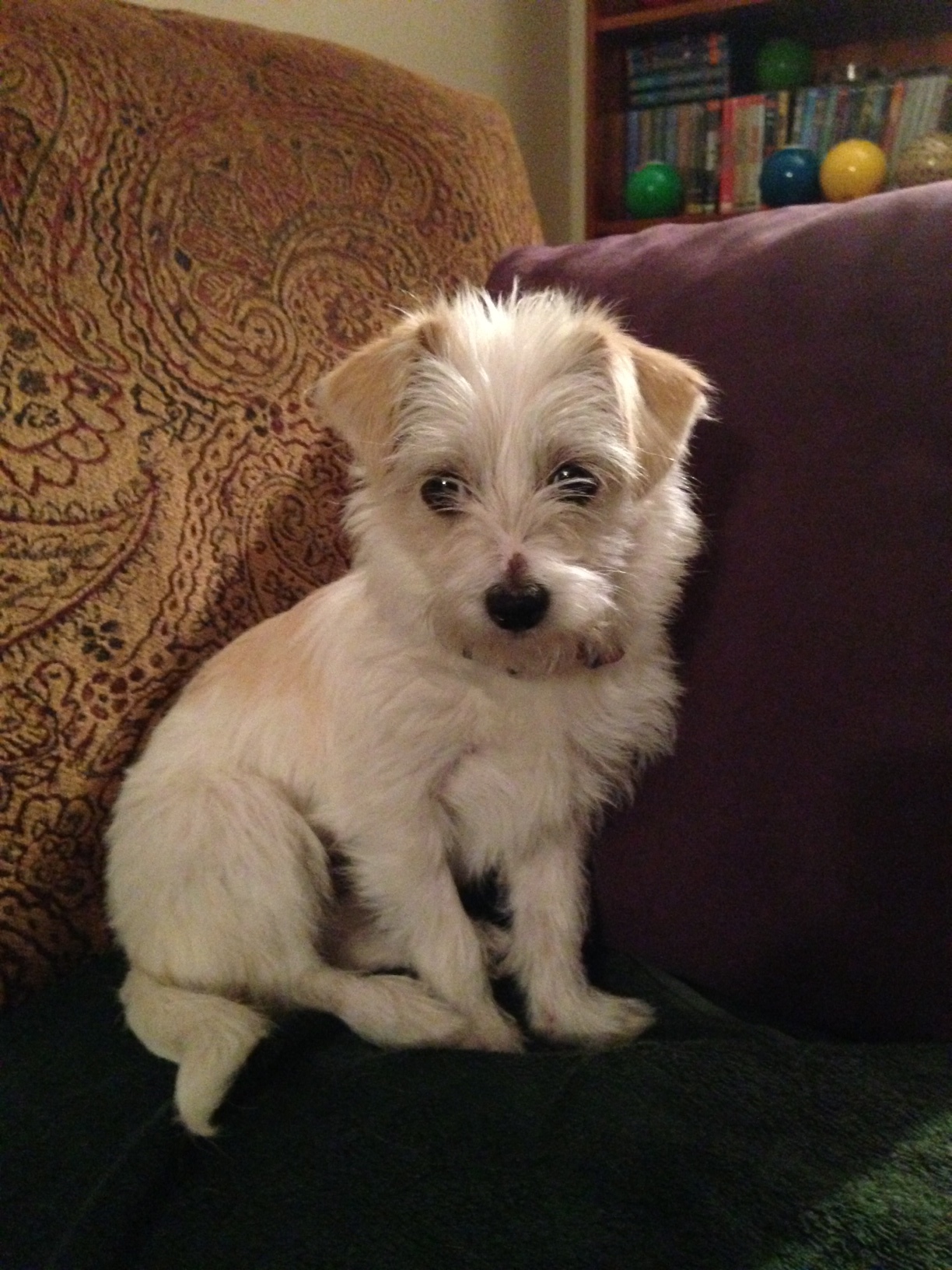 Futher update:  Friday, 30th August 2013, at 11:20pm
Alaska has had a great day today.  She has been coming readily to hand for yummy puppy kangaroo treats – still some dancing about with uncertainty before closing in, but definitely gaining in confidence. She and I spent several hours throughout the day cuddling and hanging out… she is getting used to being handled more and more every day.  I’ve seen heaps of tail wagging and she’s starting to show more and more curiosity in the things around her.  I’ve collected four socks out of her crate today… she’s venturing further and further when no one is watching which is awesome.  I’m hoping that trend continues until she is running about underfoot all the time just like Dixie does.  At one point today, I had to grab her around the middle to stop her from escaping and instead of turning on me with teeth bared like she would have a couple of weeks ago, she just froze and waited warily to see what was going to happen – which was lots of cuddles and tummy rubs so she was all good with that.  🙂

Tonight I had both puppies on the floor with me and some treats and I was making Dixie ‘sit’ or ‘drop’ for her treats.. and Alaska who I thought wouldn’t get much by way of training when we can’t handle her readily, was watching Dixie and TWICE actually ‘sat’ on command for a treat!  She sat down extremely briefly so she could make a quick get away if needs be, but I’m taking it!  I can’t believe how exciting these little things are, but when I compare them to how she was when she arrived – we are certainly making improvements every day.

Saturday, 31st August 2013 at 7:03am
I’ve just gotten up and grabbed a cuppa and a quiet Alaska has come out to greet me with tail wagging!  She actually chose to jump up on the couch beside me and was licking at my hands.  Then when I went to give her a bit of a scratch behind the ears… she slowly rolled half over so I could give her a belly rub.  I’m so proud of the little girl.  She’s still got a long way to go… but just look at how far she has come already!