According to the polls, the LNP is going to win the upcoming Federal election.  Is no one watching what has just happened in Queensland?!?

Can’t Do Campbell Newman got into office having promised ZERO public service cuts and well, as we have seen, he fucking LIED. The Qld LNP Govt has sacked 14,000 permanent public servants (that they are owning up to) and an estimated 6-7,000 temporary staff and contractors who didn’t were let go at the end of their contracts. He promised no ‘front line services’ would be affected, then swiftly redefined what ‘front line services’ are, so that nurses, healthcare workers, counsellors, aged care employees, rural fire services and communities and families officers were not considered ‘front line’, so out the door with them!  Who needs health, aged care and preventative services in the community anyway?

Newman promised ‘no forced redundancies’, but many people were angled into positions with very limited options and very bleak outlooks, so had no option but to take redundancy packages and leave. Services in Queensland have been severely affected, across both metropolitan and rural areas.  Then there’s the flow on effects… Brisbane has seen coffee shops, restaurants, retail and service industries laying off staff, and even going out of business, as people have reduced their retail and hospitality spending.  Indiscriminate culling of jobs – and that is what happened here, it was all about the head count, not their functions – leads to higher unemployment in all sectors and a down turn in economic growth. It has also led to a stressed and over worked public service as many people struggled to do the work of their sacked colleagues… and yet there is still a perception among the masses that the ‘public servants DO nothing’ and that ‘none of them work anyway’.  Obviously these people aren’t seeing what I’m seeing – public servants who work 12-14 hour days (with no flex or overtime) who are also spending their weekends working to keep up with the demands of his role thanks to lack of staff!!!

All these sackings also led to some very dodgy dealings.  I am aware of at least one high level public servant who was sacked for his political affiliation NOT because his job was no longer needed, as his position was immediately back filled.  I am aware of at least one situation where a senior executive took a redundancy package to officially lop off a permanent position, but he was back within weeks doing pretty much the same job as a contractor through a third party company.  Fast forward twelve months and that individual is now back in his original job as a permanent public servant doing the same original function he was employed to do in the first place and with a nice fat back pocket for his troubles.

Abbott has said he will sack 12,000 federal public servants to save $5.1bn – though the Australian people will have to wait until the LNP has formed government to see the details. These figures have been already been refuted by the incumbent Finance minister Penny Wong, who claims at least 20,000 people would have to go to achieve that target… Canberra with 20,000 less gainfully employed individuals would see the city’s vibrant hospitality industry decimated, and a forced mass exodus from the region as people flee looking for employment opportunities.  In turn this could flood the market with real estate, and oh big surprise a correlating tumble in housing prices.  And if he says that 12,000 have to go… I’d put money on seeing double that getting marched out the door.

Need more reasons NOT to vote for an Abbott-led LNP?

I could go on, but I really need to consider doing something more productive today than venting on a blog.  Tony Abbott is nothing but stuffed shirt.  The very definition of a political puppet.  The idea of this misogynistic buffoon representing Australia in the international arena is cringeworthy, and yet if you believe the polls, the newspapers and the mainstream media, he’s going to be our next Prime Minister.

The election is looming and I am hoping that people have been watching the cautionary tale that has unravelled before our very eyes, in Queensland… my other hopes are being strictly reserved for anyone who has the lack of foresight to vote for THIS LNP coalition – I don’t mean to impugn people who normally vote for the Liberal party or LNP coalition, but THIS current manifestation of the LNP is a disaster waiting to happen, and it feels like a deadly snake coiled around Australia’s heartland, with the ever present self interested Rupert Murdoch behind it, ready to poke the viper to make it strike the minute the clock ticks over to September 8th.

If you absolutely MUST vote for Abbott and his vituperative, vicious, and vainglorious team… for God’s sake vote for someone else in the Senate to keep the bastards honest! 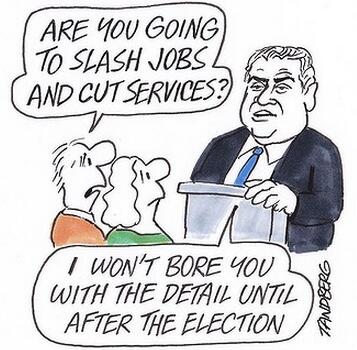