Righto. Another big day of theme park fun for the Small Child. 0730 Checklist:

Which is where our well oiled plan ground to a screeching halt. We had intended to be on the road by 0800 and hopefully beat some of the traffic from LA down to San Diego… at least that was the overarching concept. But, when we were all ready and geared to go – no keys!

And then the sad realization that the last time we had them was when we were in the carpark yesterday getting stuff out of the boot. 🙁 Keys locked in boot is not a happy way to start the day. First, try and hit the valets up to see if anyone would be prepared to break into our car for us – nope all to concerned about insurance and liability concerns (obviously not Australians). Second, call Avis roadside assistance: Welcome to Avis, your call may be monitored for quality assurance purposes. Press one for existing rentals. Press two for roadside assistance. Press two for vehicle lock outs. Enter the MVA (motor vehicle asset) number located on the top of your vehicles keytag… are they fucking serious? If I had the keytag I wouldn’t have pressed two!

Hang up and go through the selections again, this time to get the MVA number associated with our vehicle by digging up the rental agreement confirmation number (have I mentioned yet how much I love trippit.com!). Go through the motions again. Enter the stupid MVA number. Please wait while your call is transferred to an operator.. beep. beep… beeeeep. Fucking thing dropped out on me. Not once, not twice, but four times. (yes, I know, the definition of insanity is doing the same thing over and over again and expecting different results, but there seemed little option at this point). Went through the VER thing again and this time clicked through to new customers and new rental enquiries. Had a rather pointed discussion about the uselessness of their phone system, explained our situation and pleadingly requested to be put directly through to their roadside assistance people.

Eventually got the right people on the phone (well and truly 0840 by now), and the attempted to activate the GPS Starwhatever thing and unlock the vehicle remotely. Well, I could have told them that wasn’t going to work. The vehicle was in a parking garage 3 levels under the Universal City Hilton which itself was under 24 floors of concrete and holiday makers. Oh quelle surprise, it didn’t work. We will send someone out at approximately 0918. Sigh, so much for our early start and missing the traffic. FFS.

Little dude eventually turns up and takes about 15 minutes to break into the car and the trunk to thankfully find keys there – I was worried they were lost in places unknown and then we would have really been in a fucking tight spot. So, some two hours later we eventually hit the road with a two hour drive ahead of us, expected arrival time: approximately 1200… expected mood in the car: somewhat dour.

As we head on down the I5 something became quickly apparently, there was an inordinate amount of traffic, and subsequent delays, for a Saturday morning and there was no way we were going to make it there by lunch time. I don’t think we got up to the 65mph speed limit once the entire journey, and yet there was no road works, no accidents, no fucking problems whatsoever other than weekend drivers who couldn’t or wouldn’t merge politely and caused huge slow downs in traffic every time one highway was joining or leaving the I5. Finally got down to the Mile 21 turn off somewhere around 1400.

Already exhausted… we head into the park. :S

First things first, we head for the Shamu Killer Whale show. I noticed in Alaska, they were very careful to keep calling these whales ‘orca whales’, or ‘orcas’… here they were ‘killer whales’ all the way. No idea why, perhaps they think it is more sensationalist for the tourists, whereas up north where they have a lot of them, they have more of a conversationalist bent maybe? Who knows. Either way they were magnificent. Enormous sleek beautiful animals and obviously quite intelligent. We sat in the stupid soak zone and escaped most of the show without getting wet, but obviously that was never going to last and got splashed right before the show finished. There is five or six of them here, including one baby whale that was born in Seaworld in February, and as gorgeous as they are and as wonderful as it is to see them… I couldn’t help but think they needed much more space than they had in those large tanks. 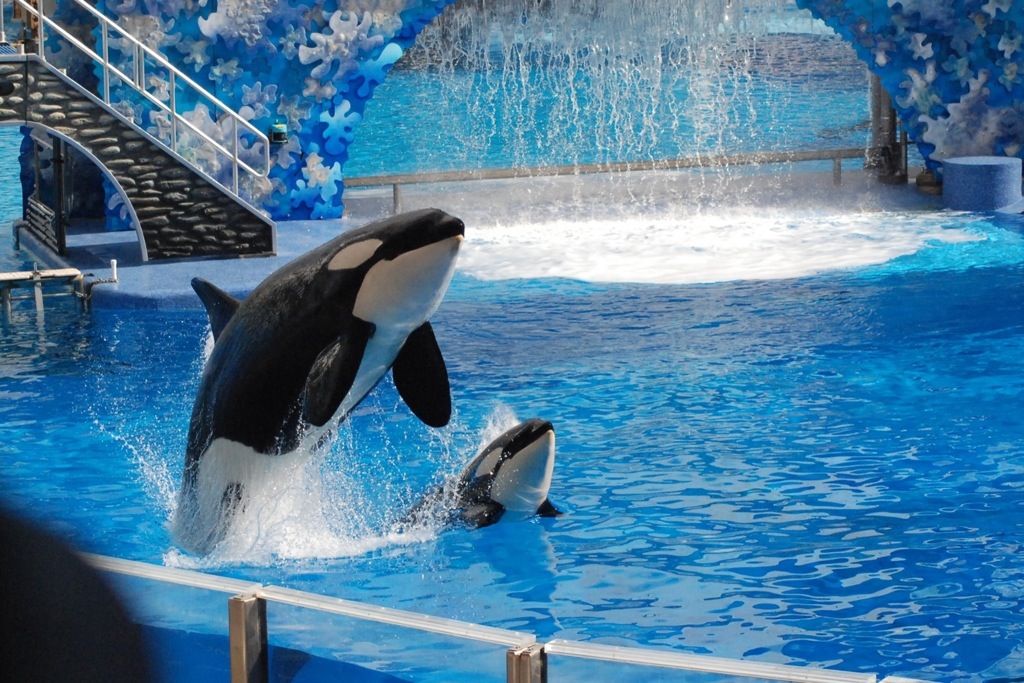 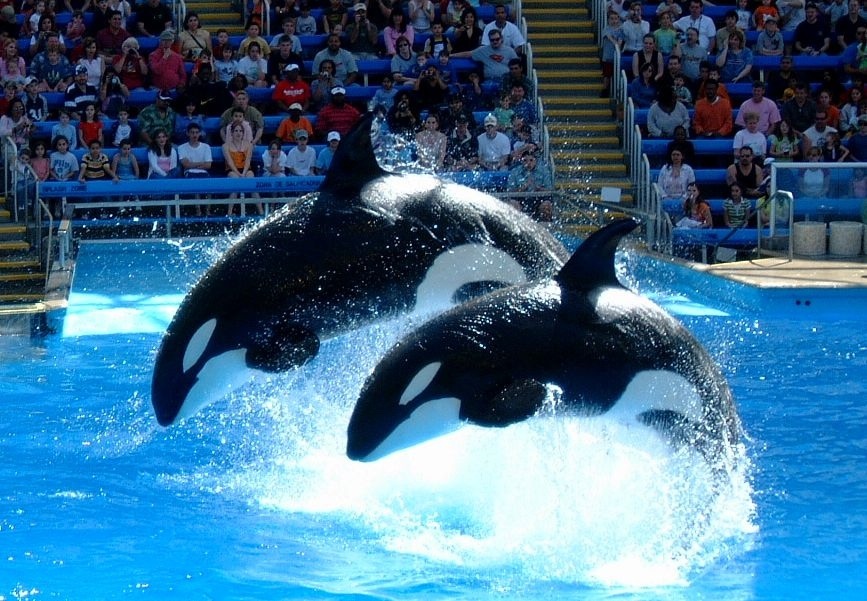 After that we wandered around a bit, the Small Child and the grandparents went on the Manta rollercoaster (no more rollercoasters for me!), and he loved it. So glad he’s over that whole rollercoaster aversion thing. We checked out some of the animals they had there, bat rays, sea lions, giant sea turtles (again with half a dozen of them in a tiny enclosure 🙁 ), flamingos and I must have taken a hundred otter pictures! All with my real camera though, not the iPhone. 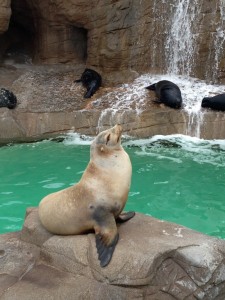 After that we went to a show called Cirque de la Mer, which as you can imagine is a bit of a Cirque du Soleil rip off… similar acrobatics, clown antics, bright costumes and fun stuff like that. Went for about 20 minutes and was well worth watching. I always enjoy that sort of thing, it blows my mind what some people are able to do. 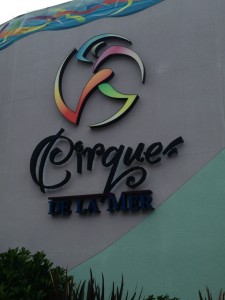 Then the Small Child wanted to go on the Shipwreck Rapids, which we were reliably informed by Aunty G back home was the best rapids ride ever. Hmmm… who wanted to get soaked that late in the afternoon? Not I said the fly. Luckily Aunty Mary came to the rescue and took him on the ride – twice! They got drenched of course but said it was awesome and if the grin on his face was anything to go by, the Kid thought it was pretty damn good too.

But, as evening fell, it was time to say goodbye to Grandpa Doug and Grandma Sue… I still can’t believe they drove all the way from Vancouver to 20 miles shy of the Mexican border to come and hang out with us. It sure was awesome to see them and the Small Child no doubt has some wonderful memories to take home with him of going to Disneyland and Universal Studios and Seaworld with them. But that is still one helluva drive to come do the theme parks!

After our soggy wet goodbye hugs were had, we were all getting a bit peckish and went hunting for some dinner. We found a place that served fish and chips, which seems both fitting and so wrong for Seaworld! Had to photograph their signage… not so sure that this would fly back home in Australia… if it’s not fried, it’s no good effectively? Oi! 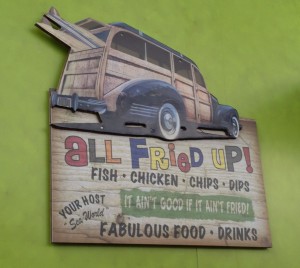 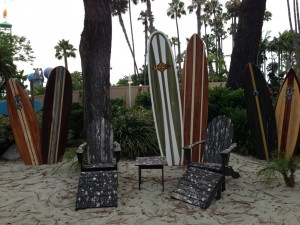 Then as we were wanting to leave, the Small Child wanted to go on the other large Atlantis rollercoaster that was in the park. Grandma was all wet, and I wasn’t keen to go, but offered to take him anyway (yes, stupid I know). We got all the way to the other end of the park and discovered that the rollercoaster in questions is in little boats and you get thrown down a flume ride at the end into the water. Oh no. Luckily, the Kid took one look at it, said ‘You don’t want to get all wet Mum, but I’m already wet, so I’ll go on it by myself.’ Wow… we’ve come a long way from ‘No, no way, I’m not riding that thing’… to ‘I’ll go it alone.’ So off he went! 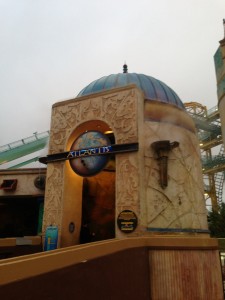 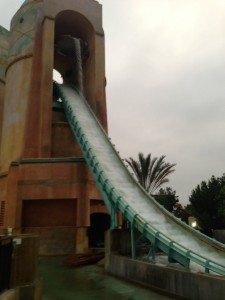 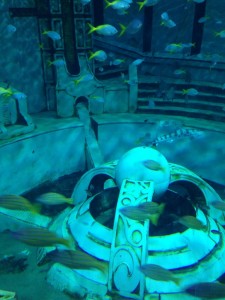 All up another huge day.