OMG. Here we go again. Alarm set for 6:30am to hit the Disneyland Park this time at 7am before the crowds. It’s totally worth doing but getting mighty hard to do, when it hurts to even put my damn shoes on! Grandma makes a sensible decision to stay back at the hotel for a few hours to sort all our luggage prior to check out, and I get the unenviable honour of taking the Small Child, with the over abundance of energy, back into the park to get as much packed in as possible before the stampede begins. 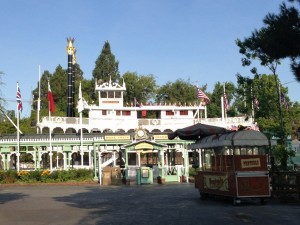 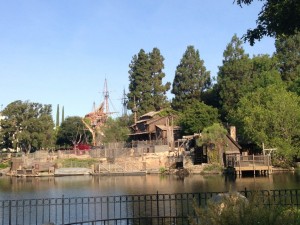 First up, he wants to hit Space Mountain (groan) but at least there was no queue! Still feels like we walked a mile through rope lines to get in though! After that, Star Tours which also had no queue – second time through and got a totally different show which was a fun pod racing thing this time. Then back over to Buzz Lightyears Astro Blasters with no waiting and Mom kicked serious butt on the shooting scores again. Following that we whipped over to the Astro Orbiter jet ride thing. Then walked straight into Splash Mountain in Critter Country to get absolutely soaked to the bone and all before 8:30am!!! 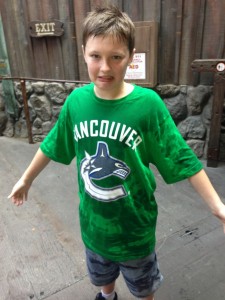 At which point we got a call from the amazing Grandpa Doug and Grandma Sue, who had just spent the last TWO DAYS straight driving directly from Canada to California to meet us. They had arrived and we raced out into the plaza to meet them. 😀

Big hugs all round and I went ‘I’m exhausted. Tag. You’re it.’, pushing the Small Child in their general direction. 🙂 Didn’t really stick though and we all head into California Park for the day. 😛 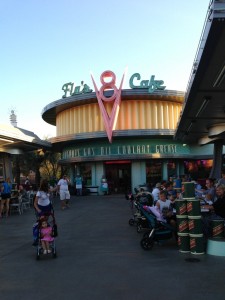 First up – get four Cars Fast Passes (Aunty Mary wasn’t in the park yet), for later in the day and sent the Small Child and Grandpa off to run through the singles queue to Cars to kick off their day! Then we went off, at the Small Childs insistence I might add, to the California Screamin’ roller coaster. Turns out, the ride I had to drag him onto kicking and screaming in the first place, is now his ‘favouritest ride ever!!!’ So we collected Fast Passes for this ride every time we were able to, and kept coming back at the allotted times. Now, as it happened we had five people and that meant five roller coaster Fast Passes every hour, and two people who chose not to ride the roller coaster… which meant that he and I got to ride it twice every hour! (What was I thinking?!?)

In between roller coaster binges we hit other rides in the area… the Little Mermaid Undersea Adventure, Mickey’s Fun Wheel (first Ferris wheel I’ve ever seen that comes equipped with motion sickness bags!), the Golden Zephyr, the Bugs Life cinema (which is so fun and which seems to be pitched at little ones but might be kinda frightening). Grandpa and the kid went on Goofy’s Sky School thing again (I totally stayed away from that neck jerking thing). We had a pretty hectic day going to various attractions and then back to the ‘favourite roller coaster’ (I’m still rolling my eyes over that). 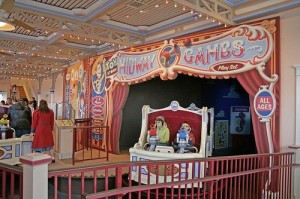 A couple of times we eyed off the queue to the Toy Story Midway Mania but the wait times were always well over 45 minutes. Eventually, I thought if try and pull a swifty and presented my ‘golden ticket’ (that had written on it ‘valid for 3’) and told the Cast Member that we were a party of 5. And disco! Literally two minutes later we were on the ride. This is another one where you’re playing a computer game as you go around in little booths and shooting at some big screens for points. Mom kicked butt in the scores again, even though Uncle Jim did much better last year when they were here (misspent youth responsible for his skills, I think – video gaming and strong repetitive wrist actions required!). 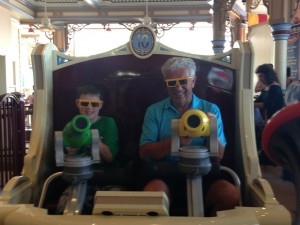 More roller coasters, some lunch, some other attractions and we found ourselves using the last ‘golden ticket’ to all get on the Midway Mania again… so much fun and lots of laughs. The Small Child beat Mum in the scores this time with accuracy completely out the window! 😀 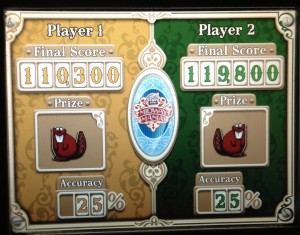 After that it was off to Cars with the four Fast Passes that we had collected six hours earlier! Four passes and five of us. Hmmm… Time for some fast talking. 🙂 I told the Cast Member monitoring the line that I was our official ticket keeper and we had been doing all the rides in a group all day, but that I seemed to have lost one of our Cars Fast Passes… I’m pretty sure it’s the Aussie accent, but the guy let us right on through. Yay! All five of us got in the one race car and yahooed and screamed our way around the track. 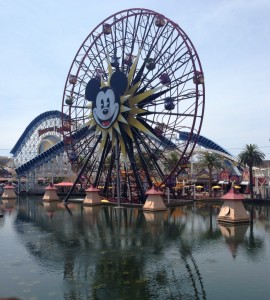 Then guess what – back to the California Screamin’ again for the Small Child. He made it through that thing 8 times! So much for not even being able to he bribed to go on it yesterday! By this time I was grinning and bearing it. The pain levels way up through the roof. Drugs not even making a dent! I had to bail and quick.

We left the Small Child in Grandpa’s capable hands and checked out to hit the road. Almost as soon as we were out of sight I was losing it quick – holding back tears and incredible increases in pain with every step we took towards the hotel. We arrived up at Universal City about an hour later and I had trouble getting out of the car. Couldn’t walk without limping to check in and sharp pains all over the place as I waited to be served. Got up to our room and just crashed.

My feet are covered in blisters in my oldest most comfortable shoes (wtf?), my shoulders won’t move, my lower back is stiff and sooo painful, I tilted my head to the right earlier, and got sharp pains shooting down my left forearm into my thumb! My nerves are just on razor blades and I just can’t move. So, tomorrow is looking pretty bleak… and that’s if I can get enough drugs into me to allow actual sleep tonight. We had fun alright, and I knew I was going to pay for it… but I feel like I’ve been hit a truck. 🙁