After prying The Small Child away from Oscar at the vet on Friday night, the next ordeal came in going to Pets in Peace… a local firm who used to in the people cremating business but saw a niche need and moved into cremating beloved pets instead.

I first came to find out about them in 2009 when my own dog, Caesar who I had for 12/13 years had to be put down after an extended battle with an adrenal cancer.  It was one of the most difficult decisions I have ever had to make in my life… when is it time to put your suffering pet down.  Caesar to me was part of the family, we had had him for ever such a long time and he had been there through thick and thin.  He had seen me through many IVF failures and always knew when I was sitting on the kitchen floor having a cry that coming and sitting with me with his head in my lap was all he could do to help.  He just knew that bugging me for food or trying to jump all over me at those times was not what I needed and he would sit quietly with his paw on my foot just looking up at me with his big brown eyes while I had my little cry, and then dusted myself off and went on with my day.  Caesar was a very intuitive and smart little guy and saying goodbye to him was extremely difficult even as an adult and knowing it was coming for several months. 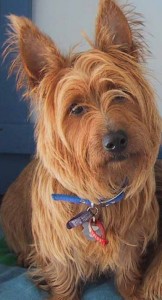 What I wasn’t prepared for when Caesar was ill and subsequently euthanised was the question that came directly after the barbiturates had been administered – “What do you want to do with his body?”  Umm… how the fuck should I know?  I wasn’t expecting that.  “What are my options?” ; “Well, we can dispose of him for you for a fee of around $70 or many people choose to cremate their pets these days since the City Council passed by-laws making it illegal to bury animals on suburban blocks.”  Pet cremation?  I never really thought of myself as crazy pet cremating lady… but after everything Caesar and I went through, there was no way I could let him be thrown out with the trash at the vets.  It just didn’t seem right.  🙁

So I found myself at Pets in Peace being greeted by a very solemn man who seemed to be taking this whole thing way more seriously than I was.  They said I would get a certificate of cremation, a lock of his hair, a paw print and they promised they would get all of my pets remains and only my pets remains and would madam like to choose an urn?  WTF?  “Um, I’m here because I couldn’t bring myself to throw him out with the medical trash, so… I don’t know.”  Whole experience was a little surreal actually and the whole time I was going through it I couldn’t believe I was actually paying someone to cremate my dog.  If I lived on a farm he’d have been underground already.  But they were excellent, really caring and sympathetic (perhaps too understanding and sympathetic for my needs) but I knew they were exactly what the Not So Small Child needed to say goodbye to his little best friend.

The only thing that concerned me was a few statements that The Small Child had made coming home from the vet on Friday night… relating to Oscar being cremated and being “twins” with Caesar in puppy heaven and they could look out for one another.  Now ordinarily when a kid says something like that you might think “That’s so sad, but also very sweet”.  But what went through my head was “Twins?  Twins?  Oh no, this going to become a ‘thing’, I can just feel it.”  And I was right.

We walked into the Pets in Peace reception centre and was met by a lovely woman named Melinda who was just the person we needed.  She answered all his questions about how we could take Oscar home and was very sensitive to his emotional distress.  She gave me some useful advice based on experience to help kids deal with grief and managed any unusual requests without hesitation – he asked her to have some of his own hair put in with Oscar (probably a response to their memento lock of hair thing) and also gave her some tissues with his tears to be cremated as well.  But when it came to choosing an urn… he looked at everything on display and said “None of these look like Caesar’s urn. How can they be “twins” in puppy heaven then?”  Now I know my son, and he has a bit of my OCD streak, and have been a keen observer of human nature for many years… so I came prepared – with a photograph of Caesars’s urn on my mobile phone.  Dont ask me how, but I just knew it was coming.  Melinda said that was very old stock and I asked her to check if they could try and order one or find one at another place and she said she’d see what she could do.

She popped out the back to consult a colleague and wasn’t gone long when she came back she had two urns the same style and size as Caesars, one green and one blue… the blue one beng exactly like Caesars.  Thank jeesy creesy for small mercies!  They were old stock that they were no longer selling and these were the last two left.  Predictably, The Small Child jumped on the blue one and said Oscar would be Caesar’s “twin” now when we bought them home. 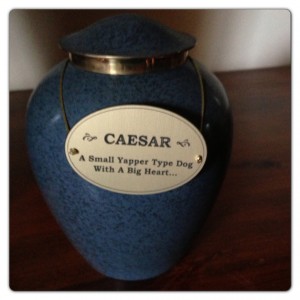 We had gone through denial and disbelief, anger and frustration, now he was doing what a lot of people do in a crisis… attempting to control the things he could control while simultaneously trying to grapple with the things that he couldn’t control.  And I thought he was starting to come to terms with the inevitability of the situation when he threw me a curve ball, “Mum, Oscar is here isn’t he… can I see him again, please?”.  OMG.  No fucking way was I going to let him put himself through that again, when I could barely pry him away from the dog’s body the night before.  Luckily Melinda jumped in and said that “Oscar was already on his way to puppy heaven to join Caesar, and we wouldn’t want to drag him back for another sad goodbye now would we?”  I could have kissed her.  She was so wonderful with him, and it wasn’t until a little later that she mentioned she had helped her young niece through losing a pet just that week, and here she was apologising for getting tearful right along side us.

The Small Child is still going through the grieving process – still getting upset and sad at every reminder, and every time he goes to automatically feed him, or let him in to play or go to check on his water. It’s been only five days so far but he’s still on auto-pilot with some of these responsibilities that he has always taken care of for him little best friend.  And still getting angry that the entire incident has happend at all.  It’s all so unfair, you see… It’s sad to think that one day he will grow up and realize that life has nothing to do with what’s ‘fair’ and what’s not.

Tomorrow, we are supposed to go and pick up his remains in his little “twin” urn… Melinda even asked me to email the photo to them so they could try to match the fonts on the plaque etc., I think she could tell too how much he was struggling to keep it together and how the idea the two dogs would be “twins” looking after each other when he couldn’t look after Oscar anymore seemed to really mean something to him.

I haven’t had the heart to point out that Caesar and Oscar never met… Oscar having joined our family several months after Caesar passed away… and at the moment,  I’m kinda hoping he doesn’t realize that is the case.