I got stuck standing around outside Latin this afternoon engaged in a conversation that I tried to politely extricate myself from about four times!  Don’t you hate it when that happens?  You’ve got places to be and people to see and find yourself caught in a conversation with someone who just won’t take a hint.  Twice I tried, “Well, I’ve got to get going, I’ll see you next week…” and even that didn’t get me out of the goddamn conversation.

Anyway, there was a young (and I don’t mind saying, rather handsome) man standing nearby who must be more perceptive than your average bear, because he actually came to my rescue and saved me from this tedious conversation!  The young stranger walked up to me and said “I’ve been looking for you everywhere!”  I looked at him, and said “You have?” with slight disbelief and a momentarily confused expression.  He said “Yes, I need your help with the mumble mumble geo-science building blah blah something or other I didn’t quite catch”.  And I said “Oh, ok.”, “See you later, Ms Tedious”, and walked off with the extremely attractive and very welcome interloper!

Once we were out of earshot and I said to him, “Do I know you?” to which he confidently replied “Nope, but you totally looked like you needed out of there!”  I laughed and thanked him for his assistance.  But this impressively confident Brad ‘Test Fighter Pilot’ (ch-ching) type guy didn’t stop just there… he asked me to come out to have a drink with him and gave me ‘the look’!

Curious huh?  Either his mates put him up to it or I must have been having one helluva good hair day today.  Oh and for the record… in a most uncharacteristic fashion for someone of the male persuasion, he was even talking to my face! 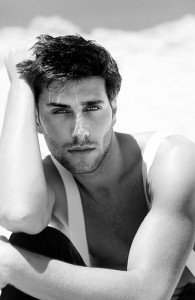