School holidays are over so it’s back to the daily routine of circumnavigating the burbs to take the Small Child to school.  Over the last five years that he’s been going to school a mere 3kms from home, the drive to school seems to be getting longer and longer.  The traffic seems to be getting worse and worse, and my patience for the situation is getting shorter and shorter as my morning commute takes an average of 40 MINUTES to drive the 6 km round trip.  But worse than the daily morning routine of making sure we have everything we need… and worse than the rude drivers that go speeding past you in the left hand lane only to cut you off and cross three lanes in front of you to turn right… and worse than the sheer banality of morning radio… and worse than the five sets of unsynched traffic lights that I need to traverse on my daily rat run is the plethora of ever so shiny stonkin’ huge 4WDs that all the soccer mom’s insist on driving to the school every morning and afternoon!

That’s right, because they seem to feel that if you’re the biggest thing on the road, then you automatically have right of way in any given situation, making traversing normally quiet suburban streets a nightmare.  So even if you never intend on taking that thing off the bitumen you sure as hell better get yourself one of the biggest legal frickin’ monster trucks that money can buy, else you’re just being down right negligent with your family’s safety. Right?

I am sick of the long line up of 4WDs near the school.  If 90% or more of your driving requirements involves running around town and city driving, then I swear you have no business owning one of these damn things.  They are an absolute menace, especially near a school environment.  Not only has the increased ownership in large 4WD vehicles with their limited visibility seen children being run over in their OWN driveways by their OWN parents overtaking the previously staggering statistics on backyard swimming pool drowning fatalities in Queensland each year –  but if a child is struck, even at low speed, the bonnet of most 4WDs is at your average primary school aged child’s head height… so risk of death and/or serious injury is significantly increased compared to similar impact injuries with smaller vehicles.  Why do we allow people to unnecessarily endanger children by bringing them anywhere near schools?

Furthermore these safety conscious parents insist on parking them in the small side streets surrounding the schools on both sides of narrow roads leaving barely enough space for a compact car to squeeze between them.  And God help you should you come up against one coming in the other direction, because the drivers will just sit there waving their hands around ineffectually, silently indicting their total impotence at manoeuvring their vehicles… ie: their complete inability to reverse their vehicles with anything resembling competence.  No, they won’t even try to move, they will just wait for you in your smaller car to reverse, or pull into a driveway or just get away of their way somehow.  No shit.  Many of these people seriously can’t drive these huge off road vehicles.  They demonstrate laughable lack of skills in manoeuvring their cars, they are completely unable to reverse them, and don’t get me started on how poorly parked they are prepared to leave these suburban monsters creating further hazards! 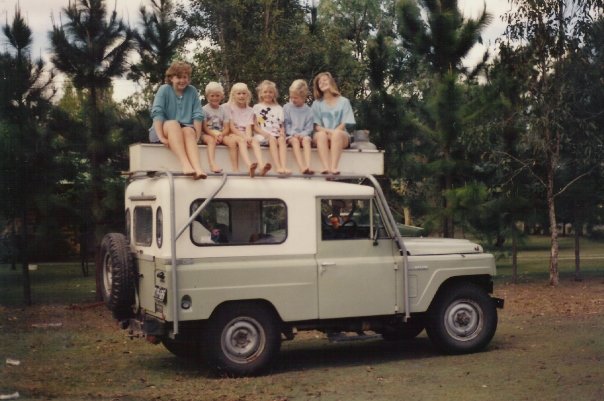 I learned to drive in a Datsun 180B and an old 1975 G60 Nissan Patrol with a three speed gearbox, no handbrake and a top speed of 80kph downhill with the wind behind it (and for the record I’d estimate that vehicle did well over 80% of it’s eventual 300,000 kms out of the city and potentially between 30-40% of those clicks on unsealed roads).  When I think of all the modern technology and safety gear stuffed into late model 4WDs, for the life of me I can’t understand why these people can’t drive them better?  And I’m tired of hearing the excuses and rationalizations for owning them in the city.

No stuff it,  There should be a three block 4WD exclusion zone in every direction around primary schools, and if you still choose to own one of these stupid suburban menaces, then get out of your damn car 150m away and walk your kid into school.  If you can’t park it properly, and you can’t reverse down a regular suburban street and you can’t see little kids behind or near your vehicle then you have no business driving the damn thing at all let alone near primary schools filled with excitable and unpredictable small children!