I was going to write about how unsettled I was when I left the trickcyclist’s office this morning but instead have decided to drivel on about something completely banal rather than dredging up some unsavoury sludge from the remnants of my all too frequently psychobabbled brain. 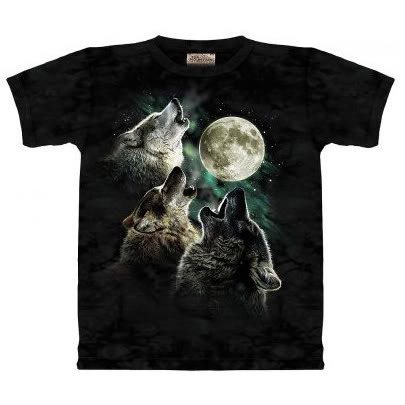 Most people probably saw the strange little internets phenomena of the Three Wolf Moon T-Shirt for sale on Amazon.com that has recently grabbed hold of the popular imagination of web dwellers everywhere (though the reasons for this ellude me entirely).   If you haven’t read any of the reviews this product has attracted and you have a few minutes and some memory to spare for some nonsense then it’s worth a squizz.  It’s just become this self perpetuating ‘thing’.  It seems one weird review deserves another… and another…. and another… ad infinitum.  Until you have a full fledged avalanche of geekdom descending on an obscure and unremarkable product causing a demand that far exceeds anything this bizarre little t-shirt deserves.

Apparently the manufacturers are pumping out some 400,000 more of them at the moment in an attempt to keep up with the demand of a 2,300% jump in sales rankings.  Truly this defies logic…. and yet… I am strangely compelled to consider acquiring one for the Small Child.  But never fear I shall fight the inclination and the Small Child will remain untainted by the trend… which no doubt will be ‘So totally last week, Man!’ by the time the item reaches Australian shores via Amazon’s uber-useless warehousing and mailing systems.

We used to say ‘mad dogs and Englishmen’… but I think that particular idiom may be in need of revision.