US marine charged over Japan rape

A US marine is to face court martial after being accused of raping a 14-year-old girl on the Japanese island of Okinawa, the US military says.  Staff Sergeant Tyrone Hadnott, 38, was first arrested for the offence by police in February. He was released by Japanese prosecutors after the girl dropped the case. Sgt Hadnott has been charged under the US military justice code “as a result of a Marine Corps investigation”. No date was set for the hearing.

He is charged with rape, abusive sexual contact with a child under 16, and kidnapping through inveigling. 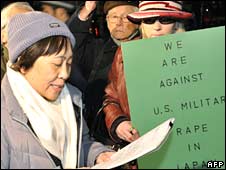 The allegations of rape in February caused outrage in Japan

The case has already caused outrage in Japan, and led to calls for stricter discipline on US troops.  More than 40,000 American troops are stationed in Japan under a security treaty, about half of them on the southern island of Okinawa.  In a separate case, four other marines are facing a court martial over the alleged rape of a Japanese woman last year.  Soon after Sgt Hadnott’s arrest on 11 February, Japanese police said he had admitted forcing the girl down and kissing her, but that he denied the rape.

While a kidnap and rape case is rarely amusing, I am slightly tickled that the word ‘inveigle’ appears to be a legal term.  As far as I was aware… ‘to inviegle’ meant to sweet talk somebody  ?!?!

l, –vee–]
– to entice, lure, or ensnare by flattery or artful talk or inducements
– to acquire, win, or obtain by beguiling talk or methods