Being so distant, I’ve never really become wrapped up in Middle Eastern politics, and never really had strong personal feelings about terrorism in general.  Even when I traveled to Pakistan and found myself in a security lockdown due to threat of possible Taleban or Al Queda attacks I knew those attacks to be aimed at the local military which had nothing to do with me personally.  That doesn’t mean to say I’ve ever sympathized with terrorist motives or methods, but I guess in my mind their attempts to enoble their cause with a certain skewed perception of religious righteousness must have taken some small root… even though I absolutely believe them to be positively and undeniably fundamentalist lunatics.  I mean to say that I believe your average fundamentalist terrorist has been bought up in a determinedly bigoted environment and those individuals are products of those insidious environments of hatred, so in some ways I’ve always felt there is a miniscule amount of diminished responsibility here… they can’t always help what they’ve become if they’ve never known any other way.

But these recent bombings are callow, calculated and opportunistic in a way that I can’t imagine anyone could honestly say elevates their cause or their religious superiority/righteousness.  How could anyone do something like this… ??  It’s one thing for a person cognizant of their actions to purposefully martyr themselves for a cause they believe in (no matter how fucked up that cause is) and it is another thing entirely to take advantage of the mental impairment of innocent people to do your dirty work…

More than 70 people have been killed by two bombs in Baghdad, attached to two mentally disabled women and detonated remotely, says a security official.

“The al-Qaeda terrorists and criminals are proud of this method,” Brig Qassem Ata al-Moussawi told the BBC. The death toll in Friday morning’s attacks at two animal markets was the highest in months in Baghdad. Correspondents say a fragile sense of normality had returned to the capital following an influx of US troops.  Security has improved significantly since the US implemented its troop “surge” in the second half of 2007.   A ceasefire announced in August by the Mehdi Army militia of Shia cleric Moqtada Sadr, as well as the emergence of local Sunni militia armed by the US military that took on al-Qaeda in Iraq, have also contributed to the sense of security. Figures released by Iraqi ministries on Friday suggested that the number of civilians and security forces killed across Iraq in January – 541 – was the lowest monthly total for nearly two years. 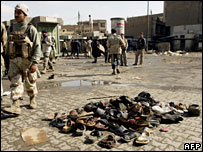 The popular market is always crowded

Confidence shattered
But that renewed confidence could be shattered by Friday’s deadly bombings, the worst to hit the Iraqi capital since three car bombs killed 80 people last 1 August.    The blasts came shortly before the call to Friday prayers when many Iraqis were out shopping or meeting friends.  The first device was detonated by a female suicide bomber at around 1020 local time (0720GMT) in the popular Ghazil animal market, killing at least 46 people and injuring a further 80.  A popular spectacle for Baghdadis, the animal market only opens on Fridays and regularly draws large crowds, despite having been targeted by bombers twice in 2007.

Just 20 minutes after the first explosion, a second bomb tore through another crowded market in the Jadida area of east Baghdad, killing at least 27 people and injuring 67.    Iraqi security forces spokesman Brig Moussawi told the BBC: “The operation was carried out by two booby-trapped mentally disabled women. [The bombs] were detonated remotely.

“Forensic and bomb squad experts as well as the people and traders of al-Shorja area of the carpet market have confirmed that the woman who was blown-up there today was often in the area and was mentally disabled… “In the New Baghdad area the shop owners and customers of the pet market confirmed that the woman who was blown-up there was mentally disabled as well.”
The US ambassador to Iraq, Ryan Crocker, said al-Qaeda had found a “different, deadly” technique.  “There is nothing they won’t do if they think it will work in creating carnage and the political fallout that comes from that,” he said.

Police and medical officials piled the dead and injured into wheelbarrows, cars and the back of pick-up trucks to be transported to five hospitals across the city.  An official at the capital’s Kindi hospital said at least 30 bodies had been received.  “We have a disaster here,” he said. “There are too many bodies to count.”