I had my 30th birthday party on the weekend…. yes slightly over due I know, but I always said I’d turn 30 eventually!  Apparently it clashed with the RH Red and White, which was accidental I assure you! Turned out to be a warm and very wet night, so we had the party inside yet again!  One of these days we’re going to hold a party outside and maybe spare my carpets a little!

So it was out with the fedoras, feathers, furs, braces and funky clunky shoes.  🙂  Everyone looked really cool.  HdM came dressed as a sailor, NMdG, Darkman, Jimbo all made good gangster types, we had one Indiana Jones, and a few flapper types.  Best costume has to go to the Humbibble dressed as a Cigarette girl in a very saucy outfit.   I can’t actually remember a lot of detail from the evening – I had loads of champagne for the girls to drink, but I think things went down hill due to Darkman’s cheap tequila, which he always feels compelled to inflict on everyone else!  I spent the whole night laughing…. and I think there was dancing…. gotta remember to eat something when we’re drinking….. and I KNOW I accidentally walked into a discussion between Darkman and Surly about fisting (not something you forget in a hurry)…. and I have vague recollections of our intrepid sailor dropping his pants…. again!  …. also there may or may not have been some sort of pile up of people on the living room floor in a rather tragic swing dance incident!   But I am pretty certain the fisting was before the teqila… which is disconcerting on so many levels!

I woke up this morning feeling not too bad, except for the positively ridiculous pain level I was experiencing in my lower back!!!  Couldn’t for the life of me figure out what I’d done to stir it up…. and then I downloaded my photos this morning!  There was indeed some sailor type pants dropping action… and yes, there was dancing of a sort….. and undeniable evidence a pile up of people on the living room floor at one stage…. and there I am – at the bottom of it!   Mysterious back  pain no longer a mystery… Sigh.

All up it was a fun night.  I’ll have to send round some of the more incriminating photos by email i think. 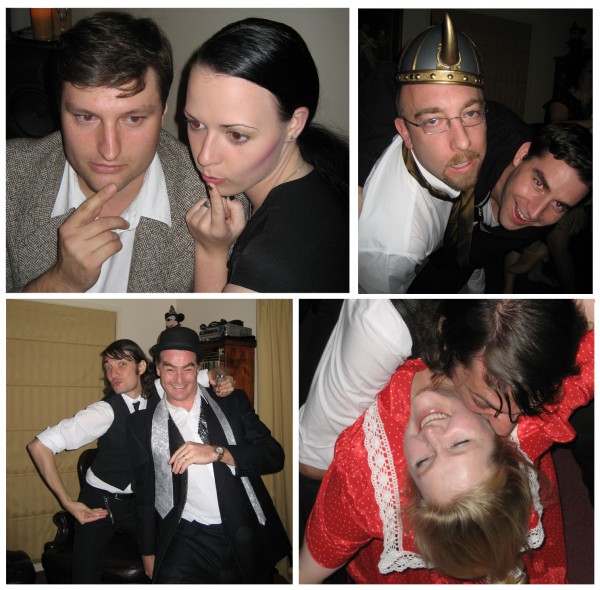