Okay I’m back!  I had a great New Years, even though I very nearly piked on the whole thing because my back has been giving me so much pain lately.   Anyway, I went to the Blokenstein New Years party and we had an absolute ball!!!  Mostly there was the regular line up of suspects, as well as a rather large Goon contingent that I’d not met before.  It was cartoon character theme and a lot of people dressed up and joined in the fancy dress.  So lets see what happened?  We had Jessica Rabbit arrive with the Magic Mirror from Shrek who  surprisingly offered no sage advice all evening – will wonders never cease!  Wonder Woman was there, and she was with her new beau, The Penguin.  I don’t think I’ve met the Penguin before, but he seems really nice and friendly.   Sailor Jupiter was there giving new meaning to the concept of short skirts!  😉  She seemed to be quite tipsy rather early in the evening and was hitting on Speed Racer and an unthemed Southerner, but alas, got nowhere!  She turned out to be more drunk than we thought, heaved mightily and had to be put to bed by Wolverine.  Wolverine looked fantastic (early on at least 😉 saw him do a couple of beer bongs, and I got a great shot of him covered in beer foam that looks really kinda suspect!  Felix the Cat turned up looking fabulous and as usual attached at the hip to a very adventurously dressed (pants so tight you could see his religion!  :P), frightening blue Thundercat!  Blue Thundercat always manages at least one drunken one heart to heart at parties – this party ~ my turn!  🙂  What else…. Ummmm Linus picked up a really cute 19 year old!.  Will more wonders never cease!!!  The Mad Hatter and Brunhilda (Bugs Bunny dressed as a girl bunny) along with the same 19 year old, snogged and danced half night away!  Danger Mouse revealed he has pierced nipples… who’d have thunk!  The Troll/Dragonball Z was conspicuously absent come midnight…. perhaps he was avoiding strangers wanting to kiss him!  Alice in Wonderland isnt as innocent as she looks, and btw, is a really good kisser!  The guy in the hockey mask needs to learn some manners!  Also, Betty Rubble is younger and prettier than Wilma Flintstone, apparently (not my observation – I overheard it!!!)  And, Generic Captain Something with his underpants on the outside of his tights was fairly fabulous, as was Princess Jasmine, who looked radiant… in the early part of the evening at least!  We all started to look a little ragged around the edges by the time midnight rolled round!  We had heaps of fun inflicting pain on Skeletor as we helped him rip some tape off his body and other than that, I guess everyone just got drunk!  Lots of kisses all round at midnight, and lots of people falling down/passing out etc by the time we left at about 2.30am.  Thanks Linus for driving us home! 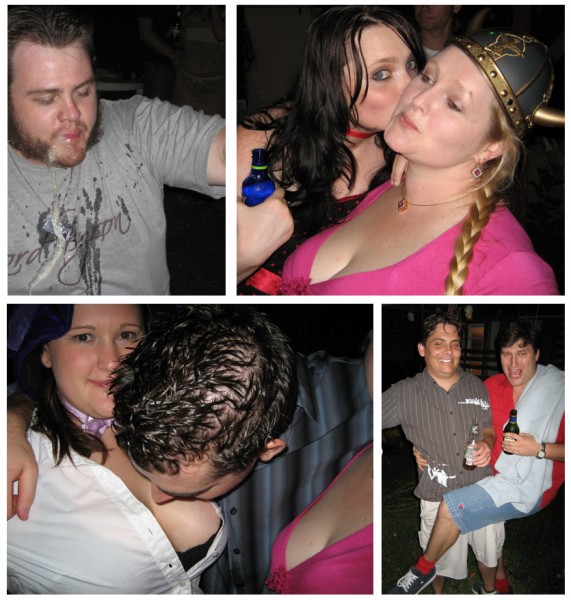 Only fly in the ointment for the evening was when some moron teenage Goon type ill advisedly turfed a glass of something that appeared to be some sort of coconut abomination of a drink over the verandah and it landed all over me!  Being half cut, and in a not insignificant amount of pain, I marched upstairs and roared at a group of  rather callow looking youths, until one of them fessed up to having tossed the hideous concoction and offered up an apology.  Grrr… sticky shoes for the rest of the night!  Only upside…. the Mad Hatter licked most of the sickly sweet stuff off my decolletage for me!  Wooftie!!!   🙂